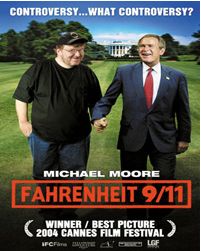 Fahrenheit 9/11 is a slick documentary, not brilliant, albeit full of anger at the present US administration and its misadventure in Iraq. In an atmosphere where patriotism is measured by how little one questions the establishment, this is a good vent for frustrated citizens of the US in an election year. However, it does not provide any real information to audiences outside the US. Al-Jazeera, Al-Arabiya, as well as much of the European media, has been saying all this for years.

Much of the footage in the film is not original; it has not been specifically shot for this documentary. However, the collection is impressive. Much of it seems to have been taken unofficially because the faces we see the president of the US making are unbelievable. On the morning of 9/11, after being informed of the second attack on the towers, Bush is seen sitting idly for seven minutes and continuing to read to kids as thousands of Americans are dying in New York City, almost catatonic. This was voiced over as him not having any of his advisors around to tell him what to do. Just before announcing the beginning of the shock-and-awe campaign to the world he is seen behaving like an idiot, making faces at someone we do not see. He is often seen working at his ranch, playing golf, and with his dogs. All this reinforces the image of this ‘leader of the free world’ who is essentially driven by handlers and has not an iota of intellect to call his own.

Then there is the part in the film which shows the strong Bush-Saudi connection, including the Bin Laden family. The only real information this part provides to non-Americans is that the Saudis control 7 per cent of the US economy. The world already knew about the Saudi investments in the Carlyle group and Citigroup. Moore looks at the Bush family business associates, and the various corporations that benefitted from the war on Iraq, thus creating, albeit without any substantive argument, an umbrella of suspicion. So while the documentary may not serve as a comprehensive guide to Bush’s sordid past, it does lead to the questions that have never been asked and policies that have never been challenged in the US media and body politic.

The president is shown as a man determined to go into Iraq not only to fulfil a prior agenda but also to pacify the military-industrial complex and the country’s economic interests. The American audience will no doubt, or at least that is what Moore expects, want to know just what the hell is going on and why more people aren’t mad about it. How many more soldiers must die before there is a public outcry? How can Bush make links to Saddam Hussein that even his own former counterterrorism czar says did not exist? Why has the media not crucified him on the absent WMDs? Why Iraq, why now, and why have so many lives been lost for one man’s re-election? To us it seems strange that it needs a film to spur people to ask the questions that the rest of the world has already been asking since the first bombs fell on Iraq.

My problem with the film is that it misses the entire thrust of the Bush foreign policy. The invasion of Iraq and the foreign policy of the administration is not driven by the relationship between the oft-quoted ‘House of Bush , House of Saud.’ That there is no mention at all of the link between the Israeli-Palestinian conflict and the war is , to say the least, disingenuous. Here is where the whole plot of the documentary falls apart. It is the neo-conservatives who drove the agenda of war, not the Saudis. But apart from showing Wolfowitz, the Deputy Secretary of Defence, licking his comb before running it through his hair, there is no mention at all of the neo-con cabal or the failed Middle-East policies that have led over the years to millions dying in Iraq, Palestine, Israel and Afghanistan. The agenda for the Iraq war was driven by the need to provide Israel with the means to extend the kingdom of David from the Niles to the Euphrates. That hundreds of Americans and thousands of others have had to lay down their lives for this to happen should have been the main question asked of the Bush administration.

That Moore does not, leads one to think that perhaps the film has tried to deflect the entire issue away from the neo-conservatives and their loyalty to the Likud Party of Israel towards the now clichÃ©d link between oil/arms and the fat cat corporate types in the US government. What should have been examined was how is it that the most powerful leader in the world has been taken down the path of war inflicted by the world’s most well armed army on a third world country, by a bunch of ideologues who are Israeli citizens to boot. Remember that Afghanistan had to be invaded to appease the American people after 9/11. It must be conceded that Moore does make the case that Afghanistan was a mere distraction and that Iraq was always the target.

Should Fahrenheit 9/11 have won Cannes? Maybe. As a movie with a specific meaning for a specific time it does make an impact as a work that is a present-day fusion of film and politics. It is pertinent today, but may not stand the test of time. What is annoying is that for a film with so much promise it delivers so little. The film reduces American foreign-policy failures to the relationship of the Bushes to the Saudis, thus reinforcing the American need to demonise individuals instead of criticising institutions, which, while claiming to be democratic, fail to uphold the rights of the people.

I must say, however, I did like the shots leading up to the war in Iraq showing pictures of youngsters playing, running blissfully through the streets, carefree and happy, before it was invaded. Images of children torn to pieces are reminiscent of the pictures of the little girl plucking petals from a flower before an atomic explosion turns her into ashes.