Young and versatile, Tanuja Chandra seems determined to turn everything she tries her hand at into instant success. From journalism to acting and direction, to scriptwriting — she has made her mark in every genre, whether on television or on the silver screen. In Karachi for the KaraFilm Festival, where her first English film, Hope And A Little Sugar, featured as the Gala Opening Film, Chandra gave an exclusive interview to Newsline. 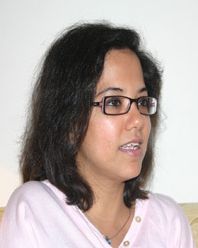 Q: From starting your career as a television journalist, how did you venture into film direction?

A: I started as a television journalist in Bombay for a company called Plus Channel in 1993-94, at a time when the satellite boom had just taken over India, and directed a series with over a hundred episodes. So, I consider television as my first school, although I did go to a film school earlier. You can learn the technology and the history in a classroom, but television provides on-the-job training, and that’s when you really learn.

Q: But you didn’t go into film direction right away. You began with script-writing first. Any particular reason?

A: I think it was the right graph to follow — beginning with television, then going into scriptwriting, which is the backbone of any film, and finally into film direction. I wrote the scripts of Tamanna and Zakhm for Bhatt sahib and then directed Dushman, which Pooja Bhatt produced. So, I have been in the field for about ten years now.

Q: How did Hope and a Little Sugar materialise?

A: Hope and A Little Sugar is my seventh feature, although it’s admittedly my first English film, and I am very excited about it. It’s aimed at a world audience and has a global subject — it’s a crossover film in many ways. I entered it at a festival in New York, and when Bhatt sahib suggested I bring the film to Pakistan, I thought it was a wonderful idea as I had always been looking for an excuse to come here.

Generally, one goes to places only in the course of one’s work, and it just worked out so well that I could be here and show a movie which has universal appeal. But, of course, my home turf is Hindi movies, and that is what I love to do. But this has been such a new and amazing experience for me that I’d love to repeat it again and again. I feel I am expanding my area in terms of storytelling, and not restricting myself — and that’s great, because I am speaking to people from the west and the east.

Q: In what ways do you feel this is a crossover film?

A: Well, not only is it a crossover thematically and language-wise, but also in the way it has been made — with an adventurous spirit and through advanced technology. The producers of this film are Americans who were complete strangers to me, but they had read my script and although they had never met me, they were driven to do the film, so they contacted me on the net. We established a relationship on the net and the entire pre-production was done on-line. Twenty-five people went from India to New York to shoot, and that was the first time we met the producers. It was amazing. We plunged straight into shooting the film and after 25 days I had to return to India to shoot my Hindi movie, so the entire post-production was also done on the net. This movie has been made possible by technology alone. I think work is the only way of getting people together. Ideologies will always clash and emotions will be different, but collaborations are the way to bring people together.

Even for the Subcontinent, I think this is the way forward. There is so much talent here and so much we can learn from each other. Our infrastructure is so strong that we can help the talent in Pakistan.

Q: I’m intrigued by the title of your film?

A: The title denotes that there is nothing in the world that can’t be solved with a little bit of hope and sugar. Sugar adds sweetness and happiness to your life, and hope is what you require all the time. It’s a Muslim-Sikh love story, set against the backdrop of 9/11, so it is very relevant. For me it was very important to bring it to Pakistan, as traditionally India and Pakistan have shared a very difficult relationship, and this film has a clear point of view — that a person’s religion or race should not be held against them. We all have to learn to live with one another — there is no other option.

Q: Suddenly there seems to be a spate of movies on the 9/11 theme. How do you explain it?

A: Yes, it’s a hot topic these days. I think it’s taken all these years for people to get used to the idea, as earlier, 9/11 was a little too close to people for them to be able to watch a movie about it. Now that enough time has elapsed and the fact that the world has not really improved in terms of relationships, it has become vital that this should be spoken about. Actually, 9/11 is only a backdrop in my film — the actual film is about relationships. Hopefully, the film is not showcasing the event itself, but using it to show something much more enduring.

Q: Have you ever thought of using local talent for any forthcoming ventures?

A: I certainly have. I had seen Shan’s music video and approached him for a couple of movies as I found him to be a fabulous performer. But it hasn’t worked out so far — in one case the dates were not suiting him and with the other he didn’t want to do a film with an Indo-Pak subject. Inshallah, some day we will do a movie together.

Q: You have basically been associated with the Bhatt camp. Are you now moving away from them with this latest venture of yours?

A: I started out with them, and my first film as writer and director was with them, but now I’ve reached a phase where I want to be independent. My last two movies, Zindagi Rocks and this English movie, have been done outside of their company, and they’ve encouraged me a lot.

Q: Of all the movies you have directed, which is your personal favourite?

A: I love Sur — it is very close to my heart. But, of course, one’s first movie is always very special — I have very fond memories of Dushman. And now I would say that I have found a unique voice in my English movie. I have this stubborn need to make movies that say something or have female protagonists. Sometimes, it doesn’t work as such movies are not in demand — I have faced an uphill task there with Hindi movies. I have struggled to find my own unique identity, and this picture, for me, is a big step. It’s like the beginning of my work. I feel there will be a quantum change in my movies from now on.

Q: So does that mean we will be seeing more English movies from you now?

A: English, for sure, as it enables you to talk to the world, but I will also be doing Hindi movies. I have never faced resistance on account of being a woman, but new ideas, especially if they are about a woman, are met with opposition in Hindi movies.

These are very interesting times — but also confusing times. The world has shrunk and everything is so accessible that there is a slight confusion about self-identity. We don’t know what we want artistically, but hopefully, this intellectual flux and experimentation will lead us to some place which is truly amazing. But for that we in the Asian cinema must collaborate with each other. Look at the huge steps Chinese cinema has taken in film-making and how Hollywood has adopted something initiated by them. This whole style of Crouching Tiger, Hidden Dragon has been adopted by Hollywood and has impacted world cinema, and we, too, need to come up with something that is unique to us.