“There are many style icons, but no fashion icons in Pakistan”

In 1989 a young achitect changed the silhouette of Pakistani fashion. In his sensational debut showing, Rizwan Beyg pulled off a design fait accompli and shot to instant stardom in Pakistan’s fashion firmament. Fashion aficionados caught their first glimpse of that inimitable stamp of creative innovation that soon became Rizwan’s hallmark.

In the nineties Rizwan experimented with and perfected the art of embroidery and embellishment. Threading his sense of aesthetics and colour into the splendour of the sub-continental heritage, Rizwan created a virtual renaissance of Mughal embroidery traditions. He then turned his talent to fusing east with west, embellishing the sharply defined lines of his new structured, angular silhouette with a contemporary reinterpretation of traditional craftsmanship.

Perhaps, Rizwan’s ultimate triumph was when he was asked to design an ensemble for that icon of western style: Princess Diana. The international media splashed that ivory ensemble accross both the print and electronic media and that international exposure brought home to Rizwan, the realisation of working towards a global fashion vocabulary. This year Rizwan wowed Cherie Blair at a show in Lahore, inspiring her to commission his embroidered coats.

On the home front, Rizwan has maintained a low catwalk profile, which as he admits,” was a mistake.” However, any doubts about his formidable talent were put to rest on the ramp at the Lux Carnival de Couture, when Rizwan blew away both the Indian designers and the audience with his most innovative and creative collection yet since his debut showing 17 years ago.

And Rizwan’s spontaneous, celebratory jig on the ramp at the end of the show, said it all… 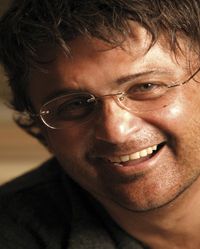 Q: Where do you think your collection for the Lux Carnival de Couture has taken Pakistani fashion?

A: What I’ve tried to do is to take Pakistani style and make it global. And I don’t think there are many designers who have even attempted to do that. I don’t think too many designers even have a definite design philosophy. When I initially approached this collection, the first question was, where does Pakistani fashion figure in the global scene? And this collection was my vision of how Pakistani fashion could look on the international ramp. That was my aim. The collection was also born out of a reaction to the stagnation of fashion in Pakistan and to prove that one could take one’s cultural identity and put it onto a global fashion canvas. I think fashion in Pakistan has sold out to Bollywood. You don’t have to be half-naked to be stylish and the evidence on the catwalk supported that philosophy.

Q: You were the undisputed star of the show, what was the high point for you?

A: The highest accolade for me was the reaction of my peers. Praise from people that I truly admire and respect, like Maheen Khan and Faiza Samee, meant a lot to me. Even Tarun, himself, was very complimentary — to the extent that he has called to find out whether I want to go with him to Milan fashion week. There can be no greater compliment. I was pleased with the collection, but thrilled with the response. I think I’ve made a good start but there’s a lot of room to take it forward.

At the press conference, Isabella Blow said she was very impressed with Pakistan’s showing and Tarun said, ‘Not all of us can make coats as beautifully as Rizwan Beyg.’ Manish was very complimentary as well. I was truly overwhelmed with the response.

Q: Do you think that this collection has shattered the myth that Indian fashion always overshadows Pakistani fashion?

A: Well, as far as Tarun is concerned, I think he miscalculated. I’ve seen what he’s capable of and so has Pakistan. There are some brilliant designers in India: Tarun, Rohit Bal; Manish Arora is a genius; Sabyasachi has amazing potential. I think that the Indian aesthetic will always have its own following. Senior Pakistani designers don’t do the whole Bollywood bling thing — that’s been taken over by the younger designers, but the Indian designers do it better. So the Bollywood aspect has its following here. India’s exotica is a worldwide phenomena. What I think I did do, was prove to the Indians that Pakistani design is a force to be reckoned with.

A: I approached this collection with complete abandon. In keeping with the theme of the evening, the clothes were a celebration. It was the Mardi Gras! I think what I did was in response to the global situation. Fashion is a reflection of the times we live in. My vision of fashion is perhaps unique in as much as it is fearless, but I’m also the first one to admit it when it doesn’t work. I have a huge storehouse of things that haven’t worked. But at least I am experimenting. Maybe that’s what separates me on the ramp from other designers. My main philosophy behind this collection was that it must be “Pakistan modern.” I wanted to retain the essential elements of being Pakistani. My version of the achkan were the coats: the farshi became the cowl skirt; the lehnga became the flamenco skirt; the kimonos were a take on the choghas. So within certain parameters I wanted to design a collection that did us justice internationally. And the most important aspect of that was the accessorising, therefore the gloves, hats, ostrich plumes etc. Today packaging is essential.

Fashion today is more about a look than a particular garment. It’s all about how you put it together. I think the collection was all about exploring one’s own identity in a different idiom.

Q: Do you think your new silhouette, particularly the dhoti shalwar, will take off?

A: I can only put forward new concepts. One reinvents fashion all the time and my interpretation was a soft double-draped dhoti shalwar and a voluminous balloon one. Introducing new elements is the only way to bring about change.

I have always maintained that Pakistan is style conscious, not fashion conscious. We have lots of style icons, but no fashion icons. People don’t dare to be different which is why silhouettes take years to change. The short shirt and the capri pant has almost become a school uniform. People here don’t want to stress their individuality, they want to hide in the crowd. People are conscious of looking good as opposed to looking different or great. I would think that I have succeeded even if I see one person wearing any ensemble as a whole and not taking just one element and teaming it with a safer option.

I would like to see people take a few risks with fashion, specially the younger lot. It’s fine to be stylish when you cross forty, but you need to be adventurous when you’re young.

Q: Do you think you’ve set yourself a tough act to follow?

A: I think I’ve set myself a task. Even this collection was a Herculean effort. I think the collection was also a slap on the wrist of some of the so-called “fashion critics,” who had kind of written me off, or those who use the fashion forum to settle personal scores. Though I must admit that for a few years I’ve limited myself to fulfilling client needs, instead of designing for the catwalk. That was a mistake. I find it really strange that apart from Newsline, not one reviewer has called to ask me what the collection was all about. I find it supremely arrogant that no one wants to know why I did what I did and are taking it upon themselves to interpret my design ethos.

Q: What’s the latest on the Design Council?

Q: There’s much controversy between the Lahore and Karachi chapters, particularly now that IMG is planning on starting a Pakistan fashion week.

A: All of us at Fashion Pakistan have decided that instead of talking about things we should start doing something about it. We are holding our elections and soon as that’s over, all the policies will be implemented. The IMG event will have participation by designers from both councils.

We are also doing our own parallel event simply to raise funds. The IMG event will not get us any funds, in fact we will be charged. At Fashion Pakistan we feel it is our duty to provide services to our members gratis and get sponsors to fund. It’s up to the elected board to decide the modalities.

Also IMG will be putting together a panel to decide who is worthy of a runway show. That might became a bit controversial. Karachi members are waiting to see what concrete shape the IMG event is going to take.