Ali Saleem aka Begum Nawazish, the queen of controversy and prime time television, bares all in this candid interview with Newsline. 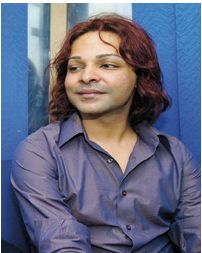 Q: How do you manage to rope in such hot-shot personalities to appear on your show?

A: Initially, it was not difficult at all because my very first guest was Makhdoom Amin Fahim, whom I had known for quite some time. Hence, other politcians also agreed to come on my show. After a few episodes went on air, the show became really popular, and it became easier to rope in high-profile guests. Now a lot of people call in themselves and say, “Do you want us in the show?”

Most of our guests are politicians belonging to opposition parties, who are always looking for an opportunity through which they can communicate with the people and put their viewpoint across. When they come, they talk about more than just politics. I wouldn’t really call it a conspiracy, but I feel in the past few years, there has been a systematic effort to tarnish the image of politicans in Pakistan. A lot of people do not want to hear about politics anymore. And because this programme has a certain touch of humour and fun and is entertaining, it has attracted people to watch the show and made politicians eager to come on it.

Q: Are there any personalities who have declined to come on your show?

A: There have been quite a few. Every person has a right to refuse, I have been asked to give various interviews and have refused. I don’t hold it against them. If I invite somebody, that is my way of showing them respect. The people I invite are people whom our viewers want to listen to. But if they refuse to come, like Imran Khan and Ghinwa Bhutto, they have their reasons, and I believe that people’s choices have to be respected.

Q: You are often outrageous, especially with your male guests. Does it ever lead to awkwardness on the sets or a reprimand from them?

A: Never, ever! Most of my guests have played along and have enjoyed it. There are some very serious things said between the lines in my monologues. Yet, it’s all presented as a sugar-coated pill. Therefore, there has been no backlash since day one.

Q: How do you make the more conservative, reserved guests in your show become more forthcoming?

A: ‘Conservative’ people would probably not agree to appear on my show. All the people who come have seen the show and have some idea as to what they are going to be subjected to. So, they are prepared for the flirtation and outrageousness. And it is this very outrageousness and flirtatiousness, that disarms even the most introverted.

Q: Is there any censorship on your programme, and if so what sort of stuff is snipped?

A: We do have an in-house censorship department, headed by the CEO of Aaj Television, Asif Zuberi, who censors the programmes himself. If there is anything that can cause a backlash, for example, if there is any singling out of a political party, something which may hurt someone’s sensitivites or anything which is wrong, such things are snipped. Otherwise, there is no reason to censor much because I try my utmost to be politically correct. I am very careful not to offend anyone’s sensibilities. Nothing said is in bad taste, whether it’s humour or sexual innuendo or a political comment. I am very particular that the show never leaves an unpleasant taste in the mouth. You will never hear a cheap or vulgar word in my programme.

Q: Which personalities do you think have been the most sporting on the show?

A: There were people like Mustafa Khar and Habib Wali Mohammad who played along really well. But then there were those of the shy variety. I thought Ali Zafar was really cute. Every time I flirted with him, he would get such a cute expression on his face! He had no issue with it, but he was clearly shocked and just didn’t know what to say. It was all very sweet!

Q: Which of the guests have been your favourites?

A:That’s such a difficult question. I liked something in everybody — somebody’s intellect, somebody’s style or face. I don’t want to take names because it would be unfair to the ones whom I left out. For me, they are all my subjects, and for me, all of them have been interesting. I have taken back something with me from each one of them.

Q: What sort of comments has this programme drawn? What are the compliments you receive and the criticisms you face?

A: Not to sound boastful, which I am going to sound, but truly, wherever I go, I receive nothing but love. I have had people coming up to me, especially women, and saying, “Your show is the only show we watch on Pakistani channels.” And they make me promise that I will never end it. For me, that’s the biggest compliment. It makes me even more conscious of my social responsibility, and I am humbled and grateful to Allah for it.

I feel pity for those people who say, “he acts like a woman — it is harming our society.” It’s an act that I do, it’s a character that I play. Shahrukh is not playing himself on-screen, he’s playing a character — he’s playing a don, he’s playing a good man, or an obsessive lover. There is a screen persona and then there is the real self. When you look back at the history of acting or theatre, there was a time when women were not allowed to act — even in progressive societies. So, it was always men who played the female roles. For those who criticise my playing the role of Begum Nawazish Ali, I pity them. I don’t take them seriously. But for them I have a message: darlings, please grow up! Smell the coffee. We are in the 21st century.

But if you have a problem with the substance of the show, the content, the thinking, talk to me. If you have any critical comments, I will sit and talk to you because I think I will be learning something from you.

Then there are certain quarters who have started saying that “Begum Nawazish calls her guests to the show and she attacks them and ridicules them.” I have never done that. The intention was never to humiliate anyone, the intention was never to make fun of people. Before they appeared on the show, many politicians were only seen though that prism — as politicians not real people. I want to draw out the person in these people, and get others to see them as human beings who have feelings, who go through life as anybody else does. And I want to tell people that they shouldn’t expect politicans to be saints. They are people at the end of the day and are people who have an opinion, people who have ambitions and want to bring about a change.

Q: We hear that there are plans to change the format and setting of the show. Is that true?

A: Very soon, we will be revamping the entire show, from the set, to the Begum’s look. I’m thinking of going into ball gowns and hats because I have had too much of saris. Maybe the begum will move into another house.

Actually, if I had it my way, I would have changed the format long ago. It’s been a year-and-a-half and the innovation is already a little late. I believe an actor has to constantly reinvent himself. However, I am not producing this show myself and I don’t have executive control. I respect my producer and my managment’s decisions.