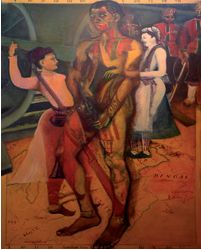 Once it was the mature and the established who brought substance to art. Today it is the young radicals who are invigorating the scene. Thesis shows at art colleges are the new hunting ground for fresh talent with young graduates getting more media and buyer attention than ever before.

The Indus Valley Degree Show, a well-attended yearly event, attracts attention because of its progressive stance and a bold aesthetic approach. This year’s batch of fine arts graduates was larger than before and particularly noticeable was the keen student interest shown for the age-old art of painting and drawing which hitherto seemed to be fading from the Indus curriculum. Most of the thesis concepts centred on exploration and location of the self in an urban environment, with particular reference to the political, social and cultural climate of the region.

Young artist Sausan Saulat searched for identity in the many “Paradoxes modern living presents us with.” Titled “Don’t rain on my parade,” her works, daring and fun-loving as they were, remained underscored with the endeavour to retain one’s individuality while trying to grapple with the complex business of living in a modern society. Sausan is proficient in the art of drawing and painting and is able to make attractive presentations. If she sharpens her concepts and brings them at par with her technical expertise, she would most certainly be an artist to watch out for. 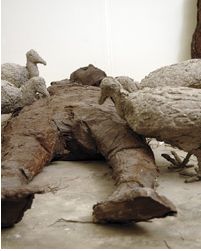 Asim Butt is another artist with potential. He paints with confidence and his pronounced expression, deconstructing what he terms “ideals of machismo and manhood received through myth and history,” veers closely around his original concept. Had he eliminated some of his rather bizarre works through a stringent selective process, it would have added to the impact of his otherwise strong repertoire. Butt is focused and gutsy enough to engage with complex issues.

Artist Ambreen Hameed, “treating bodies as cultural spaces” and “trying to show moral and cultural depletion and loss of self,” also creates imagery that translates her thoughts directly. However, the ability to strike an equation between the gross and the sophisticated and still retain the punch of the original message, is a tricky balancing act.

Madiha Hyder is another artist who resorts to unusual juxtapositions to make her statement. She evokes the conflict of power struggle, hegemony and territorial usurpation by building a contrast of good and evil. Inverting the roles of harmless domestic pets like cats, she posits them as violent perpetrators out to destroy the innocents of this world, shown through images of lovable toys. The artist, adept at painting, succeeds in unsettling the viewer with her strange images even though her concepts are not entirely resolved. 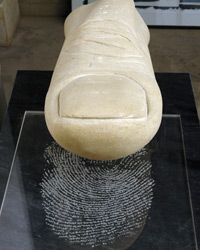 The sensitive issue of child labour is addressed with good effect in Munazah Mehmood’s monochrome anatomy drawings/paintings of hollow comb-like rib cages of young boys. She builds her case by equating this emptiness with the bleak existence of the ordinary comb-selling boys one encounters on the roadsides. Aptly titled, “Has anyone seen my childhood,” the works are stark and severe.

Nida Aqeel’s mix-and-match paintings were spot on. She tried to portray how two people of different mindsets come together and make a relationship work. Marium Agha’s stitch-crafted paintings and prayer beads installation centred on her experience of Hajj. However, it was her technique rather than the concept that was instantly noticed.

In sculpture, unlike the thesis paintings, the narrative was not quite as explicit or intentional. Young Sohail Abdullah’s anchor piece, an electrically heated table, filled with sand and dotted with varied forms of stones, offered viewers sensory experiences that were completely unintellectual. The warm stones had small balls inside them that could be turned and twisted, listened to and played around with. These fun pieces offered tactile experiences, where people could interact and engage with themselves. A promising student with deft working skills, Abdullah’s thesis repertoire unfortunately lacked centrality. Caged forms by Quratalain Waheed were modifications of enclosed spaces; her thesis dwelt on the abstruse nature of these spaces. Zartaj Bano’s sculpture, a cluster of headless tree trunks, addressed destruction of nature. Her simulation of tree bark texture from ordinary tissue paper was very life-like. 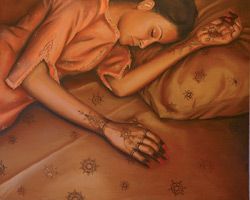 Printmaker Subika Naseer’s work explored the hidden clues of life and she had used aquatint, line-etching and soft-ground stippling to unfold its complexities. The only other printmaker, Sara Ansari, had titled her work, “Solving a puzzle named thesis.” Her focus was on what she called “my immediate space,” and added that “the chine collage in my work concerns my feelings regarding those spaces.”

Ideas and concepts were given some interesting interpretations in the ceramic sculptures section. Sabeen Ashraf Sattar’s cut fruits, like pineapples, pomegranates, coconuts and bananas were likened with the external and the internal differences in appearance that are peculiar to humans as well. The idea has significance as a concept but the works stood out more on account of their attractive appearances. Moomal Halepota had made abstracted, cylindrical and tubular bottles inspired by female forms and postures to express her throwing, slabbing, pinching and coiling techniques, treatment and texture. Uzma Abid’s functional impact lights were created in interesting shapes of basic forms. Hina Ali Dawood had worked with nesting forms and her pieces came together to form a family and she equated this with the human characteristics of individuality and ability to group together as a family. Farheen Mehdi’s outdoor pieces were inspired by zen garden aesthetics while Sonia Durrani capitalised on the increasing popularity of Japanese food here to make Utsuwa, a Japanese name for serving dishes. Wood-fired and food-specific, her Utsuwa were entirely utilitarian and conformed to Japanese aesthetics. The utility aspect of ceramics enlarges its reach, according it a usefulness that decorative sculpted forms often lack. 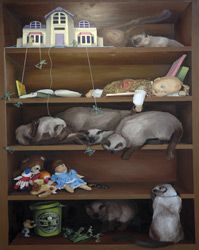 A substantial thesis turnout gave a fair indication of the new generation mindset and their dilemmas. The inescapable stamp of western imagery, especially the kind accessed directly from magazines, journals and the internet, was evident but the students also expressed genuine concern for complex issues. Last year, a number of graduates opted for a major in miniature painting. Sadly, this year the miniature scored no hits. However, the painterly exercise — of the oil on canvas variety — has made a grand comeback. Drawing and painting are essential building blocks of the academic regimen, and Indus harvested a bumper crop this year.