“There will be a few surprises in Sindh” 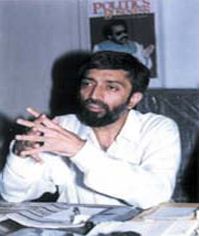 Q: Can the Muttahida get non-Urdu speaking candidates elected in the October polls ?

A: After two years of hard work in the interior of Sindh, we are hopeful of good results. There will be a few surprises in these elections, but our eyes are on the next elections… we are organising ourselves all over Pakistan.

Q: But different ethnic communities, particularly the Sindhis, have had bitter experiences with you. Are they ready to forgive?

A: Government agencies were responsible for these conflicts in the ’80s and ’90s. The Muttahida was formed to bridge this division and foil the establishment’s conspiracy. The common people never supported the division. That is why, when we decided to form the Muttahida Qaumi Movement, we got a good response from all sections of society.

Q: How many non Urdu-speaking candidates are contesting from the Muttahida platform?

A: We have awarded tickets to over 150 non Urdu-speaking candidates in the provincial assembly and 72 for the National Assembly seats.

Q: Why did you decide to make inroads into interior Sindh through Jiye Sindh?

A: The common factor is the class and the philosophy. Our survey of interior Sindh revealed that though the voters are still with the PPP, their sentiments are with Jiye Sindh. Though we differ with their strategy and extremism, the fact remains that they too are struggling against feudalism and the feudal structure. This makes them our common ally. However, for the record, our first political agreement was with the PPP in 1988 when we shared power in the PPP government. We are still ready for such cooperation, but it’s high time that both the PPP and PML (Nawaz) review their policy towards the establishment and stop supporting a strong federation.

Q: Why did the Jiye Sindh Qaumi Mahaz (JSQM) refuse to accept tickets?

A: It’s part of JSQM politics but their President, Bashir Qureshi, has announced that its workers will vote for MQM candidates.

Q: Is your party under pressure from the establishment to join the alleged ‘king’s party’?

A: It’s not the kind of pressure we had faced in the past, but certainly we have been told, in the form of an “advisory note.”

Q: Is there a possibility of the revival of the PPP-MQM relationship?

A: I am really surprised why the PPP leadership, PPP being the bigger party, never bothered to consider this. Both Benazir Bhutto and Altaf Hussain are in London. Both are from Sindh, and the PPP is presently passing through difficult times. This was the time for her to have contacted Altaf bhai . We have had a bitter experience with Nawaz Sharif as well, but when his government was removed, Altaf bhai was the first leader he contacted and admitted to his political mistakes. The PPP was the least interested party when we left the ARD. This kind of attitude will not heal wounds. We, too, are ready to accept our mistakes, but the PPP must review its relationship with the establishment.

Q: Do you agree with Benazir Bhutto’s disqualification in the elections?

A: The MQM is against the government policy of double standards. How can one candidate be accepted and another rejected on the same grounds. On the one hand, Asif Ali Zardari is in jail for the last six years and, on the other, Nawaz Sharif and his family members were given a ‘red carpet exit.’ We are also opposed to the constitutional amendments made by General Musharraf.

Q: What kind of system does the MQM really want?

A: The difference between us and other mainstream parties is that we believe that the centre should only have subjects like defence, foreign affairs, finance and, to some extent, communication, the rest should be transferred to the provinces. The MQM wants a curative treatment of all the ailments afflicting the body politic of Pakistan, which needs radical changes. That prescription alone can provide stability and internal strength.

Q: Do you think the Pakistani establishment will accept this demand?

A: We have already lost one part of the country because of the establishment’s failure to go for curative treatment. If they continue with the same policy, the consequences can be dangerous for the country.

Q: MQM has been the second largest group in the Sindh Assembly since 1988. If you win a majority, will you go for the top slot of the province?

A: The MQM, on one or two occasions, has laid claim to the chief ministership of Sindh, so it should not be surprising if the MQM makes a rightful claim again. There is no constitutional bar that a man from urban Sindh cannot become the chief minister. I don’t think the people of interior Sindh will react adversely if this happens. If given a chance, we will bring about a revolution in the development of rural Sindh, which no party has done in the past.

Q: There have been allegations that MQM chief Altaf Hussain has accepted money from Yusuf Haroon. The latter has also confirmed this, according to senior columnist Ardeshir Cowasjee. Is this true?

A: No. Neither Altaf Hussain or any other leader of the MQM has accepted money from Mr. Yusuf Haroon or anyone else. We are on record denying this allegation. These allegations came in reference to the petition filed by Asghar Khan in the Supreme Court on the role of the ISI. We want this petition to be heard as it will unveil many things. We demand that all those who had taken money should be disqualified from contesting elections. At the same time, those who had provided this money should also be punished.