For several weeks before the nominations were filed, Tariq Aziz, President Musharraf’s powerful principal secretary, had camped out in Lahore, wheeling and dealing with politicians. The country’s most powerful bureaucrat had an important task assigned to him by his military leader. His job was to knock together a pro-military alliance. Aided by Major General Ehtisham Zamir, the head of the ISI’s domestic wing, and the crafty Brigadier (retd), Aijaz Shah, a former ISI officer and home secretary Punjab, Aziz finally manoeuvered a list of ” loyal” candidates for the National Assembly from the province. Most of them belong to the PML (Q) and the Grand National Alliance, but there are several others who, the military government believes, were willing to cooperate.

Tariq Aziz, a close pal of the General’s from his student days, has been Musharraf’s key political strategist and had earlier engineered a split in the PML through his old friend, Chaudhry Shujaat Hussain. However, it was not just Aziz’s political dexterity, but also heavy arm-twisting by the ISI, as well as the administration, which forced many to switch their loyalties. Never before had the spy agency , despite its notoriety, been used so rampantly for political manipulation. ” “I was frequently summoned by ISI operatives and urged to join the PML(Q),” said a former Punjab assembly member who is standing in the elections as a PML (N) candidate. Others have had even worse experiences.

Fulfilling his pledge, President Musharraf is all set to hold general elections in the country. But his government’s credibility remains in doubt with widespread allegations of pre-poll rigging. While many opposition candidates were barred from the elections on very flimsy grounds, the military government has ensured that its favourites remain in the race. Ghulam Muhammed Mehar, a leader of PML (Q) from Sindh, produced a university degree within half an hour after he faced disqualification for being a non-graduate.

The military regime’s keenness to remove Benazir Bhutto from the contest at any cost, was transparently clear. Initially they tried to bar her participation, insisting that Bhutto had not completed her degree at Harvard and Oxford. When that failed, General Musharraf introduced a new law that specifically applied to her. After successfully disqualifying Benazir Bhutto and forcing Nawaz Sharif out of the contest, the General has removed his two main rivals from the election field. “The elections are already half stolen,” declared Benazir Bhutto, who now seems to have given up her plans to return to Pakistan before the elections.

General Musharraf’s redrafting of the constitution has evoked strong misgivings about his promise to transfer power to an elected government. His plan to create a ” guided democracy,” in which the military will continue to cast its heavy shadow, has removed all illusions about the country’s return to democracy.

In his crisp army uniform, an arrogant President Musharraf rudely dismissed a question asked by a journalist at his press conference last week, on whether he would need a ratification of his actions from the parliament. “I don’t need any approval,” came the curt reply. The brashness betrayed not only the General’s deep mistrust for the future democratically elected institution, but also a deep sense of insecurity. He has made his intentions very apparent that he will have an overriding power in the new political set up which will emerge after the parliamentary elections on October 10.

The President announced a new constitutional framework just six weeks before the elections, despite strong protest from all the mainstream political parties who said the move would lead to the establishment of a “military controlled democracy.” The General has made it abundantly clear that he will continue to hold the office of president, as well as the chief of army staff, for another five years. He said it was important for him to stay in uniform to oversee the country’s transition to a “sustainable democracy.” 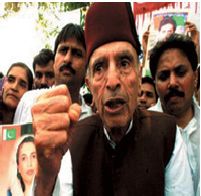 The right to dismiss the parliament restores to the presidency a key power taken away by Nawaz Sharif. President Musharraf delivered a stern warning that any attempt by the parliament to overturn the changes will have serious implications. “That is a big issue which will bring them into conflict with me and the National Security Council. Then I will decide whether I should quit or they should go,” he retorted when asked if the amendments would need approval by the parliament.

Like all military dictators, General Musharraf, too, insists that western democracy does not suit Pakistan and that he wanted to establish a political order that conformed to the specific situation of the country. “It will be a transition from a democratic dictatorship to an elected essence of democracy,” he declared. He argues the formation of the National Security Council was necessary to maintain a system of “checks and balances” and defended the inclusion of armed forces representatives in the Council, saying it would formalise a role for the military in the country’s power structure. “If you want to prevent a total military takeover, you have to give them a share in power,” he said. 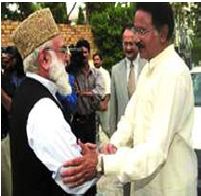 Most political observers agree the move will make President Musharraf, who has already declared himself president for five more years, through a controversial referendum, an all powerful leader, thus preventing the country from returning to a true democracy. “There cannot be a smooth transition to democracy after these radical and basic changes in the constitution,” contends a senior analyst. “The parliament will have no power in the new set-up. The move will lead to a clash with the political parties.”

Almost all political parties have rejected President Musharraf’s move, maintaining that a military dictator does not have the right to change the constitution. They warned that the concentration of all powers with the president would leave the prime minister, the cabinet and the parliament powerless, thus creating its own perils. “An individual does not have the right to amend the constitution — this is the sole prerogative of the parliament,” says Raza Rabbani, secretary general of Bhutto’s Pakistan People’s Party. “It is unfortunate that the new parliament, even before it has come into existence, is under threat of dissolution.” According to Rabbani, the imbalance of power was bound to fuel friction between the elected parliament and the military president, which will perpetuate political instability.

Unlike past military rulers, General Musharraf has governed the country for the last three years more like a ” benevolent dictator,” allowing both, a free press and political freedom. He did not impose martial law or use coercive means to silence the political opposition. He has stopped the drift and put the economy back on track. However, the goodwill he enjoyed appears to have waned. He now sounds more like an autocrat trying to further entrench himself in power. Public support for him hit its lowest ebb after a rigged referendum earlier this year through which he extended his presidential term to five more years. The referendum was a turning point because it exploded the myth of his public popularity.

Security around General Musharraf has been tightened even further because of the increasing threats to his life. For the past few weeks, he has hardly moved out of Islamabad. Several visits to Karachi, Pakistan’s most violent city, were cancelled after it was revealed that Islamic militants involved in the terrorist attack on the American consulate, were also trying to assassinate him. “He is a marked man and has to watch his back all the time,” says Samina Ahmed of the International Crisis Group

Musharraf’s move to keep all powers to himself indicates his feelings of uncertainty about the outcome of the elections and the fear of anti-military political forces taking control of the new parliament. ” He is scared of the fact that despite all the changes in the constitution, credibility still eludes him,” says Ms Ahmed. “Without legitimacy his survival in power will always be in doubt.”

Despite its declining support base, military authorities appear confident that they will be able to ride through, perhaps, the most serious challenge to their rule yet. They believe that in the absence of Benazir Bhutto and Nawaz Sharif, the elections will be restricted to local issues and votes would be cast on the Biradari basis. “That will help the traditional influential families in Punjab, most of whom have joined the PML (Q),” says a senior official. Public disenchantment with the civilian political leaders who ruled the country for ten years before the military take-over in October 1999, has helped the military to contain the situation , so far. Both Benazir Bhutto and Nawaz Sharif have been charged with corruption. The political fragmentation and absence of any strong and charismatic leader has also helped General Musharraf to counter any opposition.

However, this situation might change when the election campaign begins. Despite her disqualification, Bhutto remains a key player on the country’s political scene. She can still mobilise anti-military public sentiment from exile. Though chances of her coming back before the polls are slim, her supporters appear quite confident that the party will sweep the polls even without her running the campaign. Even the military government’s staunchest loyalists agree that in the event of free and fair elections, the parliament is most likely to be dominated by the PPP and other anti-military parties.

Despite the impending crisis, there is no likelihood of General Musharraf being ousted. “The military has the coercive force to prevent any threat that would physically overturn the government,” maintains Ms Ahmed. “Besides, there is no political leader in the country who could mobilise the masses and bring them out on the streets.”

A key US ally in the war against terrorism, General Musharraf continues to enjoy the support of the Bush administration. That support, however, could erode in the event of a strong public backlash. In Washington, a State Department spokesman referred to the need for following constitutional procedures, but stopped short of criticising General Musharraf’s latest move to grab more powers. Washington will be watching the situation very closely and General Musharraf would do well not to view his romance with Bush as a life-long affair.