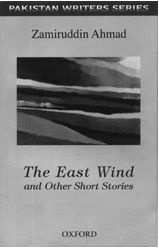 Zamiruddin Ahmad’s The East Wind and other Short Stories, part of OUP’s Pakistan Writers Series, might aptly be described as a labour of love. This representative selection of Zamiruddin Ahmad’s fiction has been translated into English by the author’s own son, and perhaps most ardent fan, British-bred Shamoon Zamir who is the director of the American Studies Programme at King’s College, London.

The East Wind starts off almost autobiographically, with ‘First Death.’ The theme of personal loss and repressed anguish recurs throughout the book, a consequence of a man’s struggle with the vicissitudes of everyday life. Interwoven in the tales in which the protagonists resign themselves to the forces of circumstance, which seemingly propel them toward moral and religous compromise, are strong undercurrents of rebellion, of struggle to be true to themselves. Whilst ‘First Death’ expresses a certain hopelessness, of the failure to be true to one’s own personal estimations, it is ultimately a story of inner strife, and one that seems strangely personal.

In fact, the carefully chosen compendium can be read almost as a vicarious chronicle of the author’s own experiences. Zamiruddin Ahmad was born in a well respected family, with roots trailing back to Fatehgarh and Farrukhabad in UP — places which feature prominently in his stories. Shamoon recalls, “when my father spoke of his childhood, he would remember most clearly the day to day family life and the running about in narrow streets and alleyways or by the river bank.” And it is in this almost innocuous rhythm of banal activities that his tales are set, woven with a bare minimalism of speech, gesture or incident.

The domestic world of Zamiruddin’s childhood is captured amongst others, in ‘The Path of Righteousness,’ a story drawn loosely from his family history. The tale focuses on the tensions and rivalries between two sisters, played out between them and their children and recounted by a young boy of the family. The plot focuses around marriage, where one daughter is pushed into an unhappy marriage with a suitor that her mother cannot see fault with, whilst a second daughter is given in marriage to a much older man. Rebellion takes the form of the third and youngest daughter, who tries to escape from this hopeless cycle. The narrative employed here serves as a tool to foil the milieu of hypocrisy in the life of a middle class Muslim family in pre-Partition UP. This detached yet bitter-sharp satire on moral hypocrisies and the depravity of culturally ingrained practices encompasses careful but accurate criticism. The stories in the collection combine a careful economy of plot with highly evocative strains, through which runs a muted current of political dissent and references to the freedom struggle, influenced perhaps by Zamiruddin’s days as a respected news editor.

Amongst other themes, Zamiruddin’s disquieting unease about the future of Urdu, and of Muslim culture in India shines through prominently, often as a homily at the very heart of his narratives. ‘On the Banks of the Ganges,’ a tale about a father’s journey with his son into the cultural homeland that is UP, serves as a vehicle for the passion of Zamiruddin’s heart. In Sajid and Shahid’s wanderings in Fatehgarh and Farrukhabad, and their train ride to Allahabad is the perfect background for a discussion of the history and culture of UP and a blending of Hindu and Muslim cultures. It is here that his criticism of the suppression of history in the name of religion takes a not so muted form, interspersed with yearnings for a peaceful co-existence, recognising and celebrating the cultural diversity of the past.

It may be valid to question if Shamoon, in translating Zamiruddin’s works does justice to his father’s passion, whether Zamiruddin’s vociferous championing of Urdu and his critical stance on the religous chauvinism of the masses is appropriate for translation. In addition, it is doubtful whether an English translation can ever accurately capture the subtle symbolism and intonations of an understated but evocative Urdu word.

Shamoon himself seems to have grappled with this dilemma, finally owning that whereas, “stories such as ‘The Path of Righteousness’ and ‘Unheard Lament’ do share something of the cultural layering that characterises ‘On the Banks of the Ganges,’ elsewhere and more usually the strata are less immediately before the eyes; they are instead in the very language itself, in the sharp command of cultural nuance and history within deceptively simple vernacular elegance which defies the Urdu in which these stories were written. And here translation is defeated.”

Yet, it seems that with a son’s loving hand and insight into the hidden intonations behind the phrases, a translation can do justice. There is an element of sensationalism in Zamiruddin’s works but it is his masterful use of the understatement, employed to depict moral and emotional complexity, which puts him in a league apart. “It is the sound of the repetitions and variations which has remained clearly in my ears and which has been one of the hardest things to get right in the translations themselves,” says Shamoon. The effect, however, has largely been achieved.

All stories share a common theme: the sexual and emotional lives of Muslim women, caught in a moment of time. And it is in the clever economy of plot and words that the feeling of the beat of life and the inward rebellion of the female protagonists takes off. Zamiruddin’s women are multifaceted, and far from stereotypical, although it is in the daily movement of their lives that the stories are set. The stories are told through small everyday actions, which hint at deeper feeling, and which, to the perceptive listener, can seem as loud as screams.

The title story is perhaps the best example of Zamiruddin’s simplicity of his style, subtle yet emotional and charged all at once. ‘The East Wind,’ in the style of the European short story writer Camus, is replete with bare minimalism of domestic gesture and speech. The small domestic activities of clothing oneself, taking a shower, a family meal and short verbal exchanges are laden with hidden meaning. The story revolves around a day in the life of a lower middle class Indian couple. It is apparent from the outset that theirs has degenerated into a functional relationship, with the absence of intimacy. One day on her way home from work, the woman sees a man from her past, and after hesitatingly asking about his marital status finds that he is still single. The house is clean when her husband comes home. She has prepared a special meal, bathed and dressed in nice clothes. After dinner she waits for him somewhat expectantly, but he is too engrossed in his work to notice. When he comes into the bedroom, and moves to tuck her in, he finds her sleeping in the nude. Just as he makes to kiss her he notices that she has been crying. Covering his wife, he sits down on his own bed. This is a still, yet hung ending and could be interpretated as the failure of the marriage or a renewal of love. Were the wife’s tears a result of the return of desire for her husband or for a life which was past?

The stories are permeated with unfulfilled desires, brought home through a juxtaposition of the inner and outer environment. Images of spring, life, and renwal are juxtaposed with death and a dashing of hopes and aspirations. Sajid murmurs a couplet in ‘On the Banks of the Ganges’: “Though the fields were spread like the smile of a spring dawn, the eyes were filled with tears in her arms at the journey’s end.” Yet for Zamiruddin, one may conclude that the inner tugs have been resolved. The harshness of life may herald much disappointment, but amongst the melancholic strains of foregone ideals lie positive notes, of being reborn and moving on, and dancing to the music of life.