The atmosphere in the room was grim. A sense of unease gripped the meeting as a senior ISI officer told the leaders of various jihadi groups assembled there that the launching of fighters across the Line of Control had to be stopped. “We don’t have a choice in the prevailing situation. There is tremendous pressure on Pakistan,” he was reported as saying. The meeting ended on a bitter note and the leaders left, declining the officer’s invitation to join him for a meal. “Everyone was dejected by Pakistan’s turnaround,” said a participant.

Most of the Islamic militant leaders view Pakistan’s latest move as a serious setback to the Kashmiri freedom struggle against India. “General Musharraf has now betrayed the Kashmiris after ditching the Taliban in Afghanistan,” said a veteran militant. His feelings are shared by most Kashmiri militants, who have depended for over a decade on the Pakistan army’s active support for their cross-border guerrilla actions.

President Musharraf’s decision to stop the use of Pakistani-administered areas to promote any guerrilla activity in Indian-controlled Kashmir has fulfilled a major demand of the US and other western countries. But can President Musharraf rein in the powerful militant groups and prevent war? In any event, Pakistan’s conciliatory measures appear to have had little effect on India which continues to maintain its belligerent stance. It is quite apparent that Delhi is not prepared to reciprocate Pakistan’s moves to end the present military standoff and dispel the possibility of a cataclysmic conflict.

President Musharraf’s decision to cut off support for Pakistan-based Islamic militant groups came some 10 days ago as the heightened tension with India raised fears of a nuclear war in the region. Intense pressure from the United States and other countries also forced Musharraf to pull back.

Military authorities maintain that troops have been ordered not to let anyone cross the border. “We are watching any movement on the LoC,” said Brigadier Iftikhar Ahmed Khan.

For the first time, Islamabad has moved to withdraw support for the Islamic militants who have been fighting in Kashmir over the last 10 years. More than 1500 Pakistan-based fighters are said to be involved in the ongoing armed struggle in the disputed Himalayan state. In spite of the policy change, India continues to maintain that there is no proof on the ground that Pakistan has fulfilled its promise to curb militants. 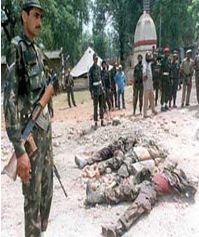 Kashmiri militant sources have confirmed that the communication link between the guerrilla fighters inside Indian Kashmir and their base on the Pakistani side has been cut off and the training centres inside Azad Kashmir closed down. “Many of our colleagues are stuck across the border without reinforcements and supplies,” said a guerrilla commander. The Pakistan government’s orders came as hundreds of fresh guerrillas were waiting at their base camps in Azad Kashmir to cross the border. It is generally at this time of the year that infiltration takes place. “The volunteers are becoming increasingly upset over the delay. They have not been informed about Pakistan’s ban,” said the commander.

The militant leader warned that Pakistan’s decision to withdraw support may cause a setback to the armed struggle, but would not bring an end to it. According to him, there are hundreds of militants still fighting the Indian forces and he predicts more suicide attacks in the days to come. “With limited chances of their returning home they would step up the attacks,” he said. He appeared optimistic, however, that Pakistan’s ban was temporary and its support would resume after the present military tension with India eases. “The army will always be our ally,” he declared.

President Musharraf insisted that he was doing everything possible to de-escalate tension and avert a war in the region, adding that there had to be some progress in addressing and initiating a process of dialogue on the Kashmir issue. His statement clearly calls for reciprocation from the Indian leaders to end the present stalemate between the two nations that raises the spectre of a nuclear war.

The Indian leaders, however, continue to reiterate that President Musharraf’s promises do not work on the ground. They have refused to start a dialogue with Pakistan until “all the infrastructure of terror” is destroyed.

There appears to be a wide gap between what the Indian leaders demand and what General Musharraf can deliver in the present situation. India’s mistrust of the Pakistani military leadership has thwarted all moves by the international community to bring the two warring sides to the negotiating table. It is quite evident that any major terrorist action targeting civilians in Kashmir will certainly trigger an Indian military strike against the “terrorist camps” inside the Pakistani-controlled region.

President Musharraf is sitting on the horns of a serious dilemma. He sincerely wants to prevent a war, but at the same time would not like to be seen as a leader who gave up the country’s “sacred” cause in Kashmir.

He badly needs a face-saving device if he is to take further steps backward to meet the expectations of the international community. President Musharraf is trying desperately to maintain his balancing act at the moment. His “blow hot, blow cold” posture accurately reflects the difficulties he faces at home, where he is, once again, taking a controversial position on a sensitive issue. Islamic hardliners now accuse him of “betraying Kashmir’s freedom struggle”. Most observers agree that the military will not allow him to “go beyond a limit” on curbing the activities of Islamic militants, whom most soldiers believe have been fighting for a Pakistani cause. He faces an imminent revolt from his soldiers if he takes any further action without some signs of flexibility from the Indian side.

Making the situation even more dangerous is the absence of senior level contact between the two nuclear capable nations locked in a serious military confrontation. The recent shuttle diplomacy involving British foreign secretary Jack Straw and some other western leaders has not helped in bringing about a thaw.

While the recent Almaty summit provided the two leaders an opportunity to meet on the sidelines, and Russian President Putin pressed hard for a meeting, the intransigent Vajpayee dashed the hopes of the international community. President Musharraf has meanwhile reiterated his willingness to meet the Indian prime minister, anytime, anywhere. 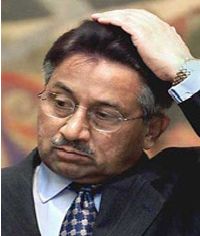 A meeting with the Indian prime minister would certainly boost President Musharraf’s position at home, giving him room to maneuver. Pakistani officials believe that the upcoming high profile visit of US Secretary of Defence Donald Rumsfeld may help to break the ice. But the major issue is how far Pakistan can be pressured into conceding to India’s demands, and what India can offer in return.

Pakistani authorities said that they were ready to consider a suggestion to deploy a 300-strong multinational helicopter- borne monitoring force along the LoC dividing the Indian- and Pakistani-administered sides of Kashmir.

The proposal came under discussion in the talks between President Musharraf and Foreign Secretary Jack Straw in Islamabad earlier this week. Pakistan will welcome any move to deploy an international force to monitor whether any infiltration is taking place from Pakistani-administered areas, said a senior foreign ministry official.

“The suggestion to deploy a heli-borne force is consistent with our long-standing offer to position a neutral and impartial force to verify the Indian allegation,” said a senior Pakistani diplomat. “As far as Pakistan is concerned, if India was to accept that, we would also consider accepting that on both sides of the LoC to monitor the situation,” said Munir Akram, Pakistani envoy to the United Nations. India has rejected any such offer.

At the Almaty Summit, Prime Minister Vajpayee suggested joint monitoring of the LoC by India and Pakistan, a proposal that met a negative response from Pakistan. Pakistan continues to press for the deployment of a UN-sponsored monitoring force to check infiltration.

“President Musharraf is walking a very tight rope,” says Lt General(retired) Talat Masood. “There is a strong feeling in the army that India is trying to humiliate us by dictating terms for peace.”

The military officers who stood by President Musharraf when he moved away from Pakistan’s longstanding policy of supporting the conservative Taliban regime in Afghanistan and joined the US-led coalition against terrorism, are not likely to maintain their loyalty towards him if he decides to make a radical shift on the Kashmir issue.

“There is a limit to which the army can go along on a policy of using force against those who are seen as fighting for Pakistan’s interest in Kashmir,” said Lt General (ret) Hamid Gul, a former ISI chief. A fiercely anti-American former commander, he accuses General Musharraf of “going too far in appeasing the west” and taking a “step back” on the Kashmir issue. “By calling those attacking the Indian forces terrorists, General Musharraf is only echoing the Indian position,” said General Gul.

President Musharraf’s position has become more tenuous because of a growing feeling against the United States in the military ranks. Many officers believe the western countries, particularly the US, have not come to Pakistan’s support as it faces the threat of war from its nuclear rival.

General Musharraf has made major changes in the army’s high command several times since October last year to sideline conservative generals opposed to his policy of joining the US-led anti-terror coalition.

The successive purges helped General Musharraf to bring loyal, liberal officers to key positions, but many of those fallen from grace are still sitting in military headquarters, though at less important positions and can capitalise on the crisis situation.

Most military observers agree that General Musharraf has put his own survival at stake by deciding to curb Islamic militancy. Security around him has been tightened. His movements are kept secret and his travel route often changed because of growing fear of his meeting the fate of Anwer Saadat, the Egyptian president who was assassinated by an Islamic militant after he made peace with Israel.

For more than 50 years the objective of “liberation of Kashmir” has been the main source of motivation for the Pakistani army. It has gone to war with India on the Kashmir issue twice and come close to war on two other occasions. The humiliating military defeat at the hands of Indian forces in 1971 has left a deep mark on the psyche of the Pakistan army. Most of the top military commanders, including General Musharraf, were young officers at that time and felt the humiliation deeply.

The military incursion in Kashmir’s Kargil mountains in May 1999 was carried out by these officers who wanted to avenge the 1971 defeat. A full-fledged war was averted because of pressure from the United States. Pakistan, however, continued to support the Islamic guerrilla groups operating from the bases inside Pakistani-controlled Kashmir.

General Musharraf now faces the toughest challenge as he tries to withdraw support for the militants. “The President feels that there is now a conflict of interest between the militants and the military,” says General Masood. “He cannot allow the militants to take over the country.” But it is not clear whether other army officers agree with him.