It was another tense and hot evening for the soldiers posted at the picket established by the Pakistan army in the main Miranshah market in the tribal area of north Waziristan. A soldier stepped forward and asked the driver of a pick-up van to stop. Without slowing down even a mite, the driver yelled back that he was transporting his sick wife from the hospital. Unaware of what was transpiring, the soldiers standing by cocked their sten guns, but thankfully, did not fire. This situation, which could well have ended in tragedy, is symptomatic of the uncertainty that prevails in the region today in the wake of the joint “anti-terrorism” operation currently being conducted by the Pakistan army and the FBI.

“The army has no right to stop vehicles for no reason, especially those driving in or out of hospitals. This was not supposed to be the army’s brief,” says a local from Miranshah. The army has set up more than a dozen check-posts at the entry points, exits and other sensitive points in Miranshah. Armoured Personnel Carriers (APCs) have also moved in, apparently to preempt any demonstration in the area. Although there is a ban on the display and exhibition of arms, dozens of arms shops continue with business as usual. “Since the ban, our daily sales have dropped by over 50 per cent. We have been told by the army not to bring any more arms into the market. Nevertheless, customers are allowed to purchase arms and take them out of Miranshah, but we have been asked to make proper entries of their daily sales,” said an arms dealer in Miranshah market. And despite the ban on the display of arms, a few people are seen carrying Russian-made Kalashnikovs on the streets.

Although none of the troops stationed in the area are locals, most are Pashtuns who belong to other areas of the Frontier province. This does not, however, detract from the resentment felt by the locals about their presence.

“We were at ease with the Frontier Constabulary and scouts who have been here for the past 50 years, but the army’s presence spells trouble,” says Mujib Khan, a resident of Miranshah, who belongs to the influential Wazir tribe.

The Pakistan army sent its troops into this tribal belt after holding jirgas with the tribal elders of the area and pledging that the government would ensure the development of the infrastructure in Waziristan. In exchange they were given a guarantee of cooperation by the elders who promised to allow the soldiers to check the infiltration of Taliban and Al-Qaeda men from across the border. The tribesman also agreed to impose a fine of Rs. 0.5 million and bulldoze the house of anyone who was found providing shelter to any Al-Qaeda member.

At least seven unsuccessful raids were conducted in Miranshah by the army under the supervision of American commandos. In one raid 10 kms east of Miranshah, the army recovered two pick-up loads of various types of weapons, including rocket launchers, from the house of an arms dealer, Guleen.

Army troops had arrived in the village in a convoy of 16 vehicles including APCs. “Three American soldiers were waiting outside our house while Pak army soldiers went inside to collect the arms,” said Guleen’s uncle, 70-year-old Mohabbat Khan. “This raid, as the others, were conducted by the commandos without any proper intimation to the political agent or tribal elders as had earlier been agreed upon.” Only when the tribal elders arrived, did the three-hour operation come to an end,” said a fully armed Mohabbat Khan angrily.

The President of the Tehreek-e-Itehad Qabail, Waziristan, Malik Khan Marjan, was even more disparaging about the forces’ activities in the area. He claimed Waziristan was free from any kind of terrorism and denied the existence of any Taliban or Al-Qaeda operatives in the area. He was particularly hostile to the American presence. “It is useless for American forces to stay here; they have been completely unsuccessful in their mission,” he maintained.

In southern Waziristan, the scouts conducted raids in Azam Warsak, a border town on the Durand Line and arrested more than 160 Afghanis. Over 100 others were released after screening. “Most of the men who were picked up on suspicion of being Al-Qaeda members were labourers and vendors,” said Mir Zalam Khan, who accompanied the scouts during the raids. 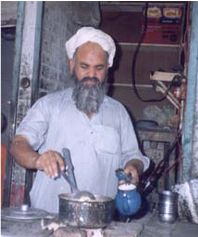 Mir Zalam Khan questioned the army’s actions in the area. He cited the case of a school teacher, Sakhi Marjan 35, who he claims is extremely honest and who was arrested from his school by the scouts. “They would not release him even on my personal guarantee,” said Zalam Khan. However, he contended that he never saw any American in his area (south Waziristan).

The army also faces a challenge from Abdul Rasheed, a notorious tribal outlaw who rules the Shawal area which lies on the Durand Line bordering Paktia in Afghanistan’s Paktika province and north and southern Waziristan. Abdul Rasheed is reportedly involved in over a thousand cases of robbery, murder and kidnapping for ransom. “He would even dare to kidnap FC men and only release them after getting the ransom money,” said a local resident of Miranshah. So far all efforts by the authorities to entrap or, more recently, lure with monetary enticements, the Shawal people have failed. In fact, the army has never had any access to the Shawwal area in the past 50 years.

A pro-Taliban activist who participated in the jihad in Afghanistan and now runs a madrassa in Miranshah said, “Whatever action the government is taking is against the law and Sharia. Musharraf is doing something very unethical. Interference in the affairs of Muslims by kafirs (non-Muslims) is unlawful. Musharraf is only the US’ friend and he has proved it now,” he claimed. There were several similar refrains from other tribesmen. “If the US trusts Musharraf, then let the Pakistan army conduct the operation here. The American presence proves they don’t trust Musharraf,” said one local. Another added, “The Al-Qaeda is not here. The American and Pakistani commandos are here only to crush the Muslims. We have already issued fatwas that we will take action against US and Pakistani troops. Death is their fate.” And the head of a religious seminary contended, “I sent my students for jihad, and I will continue to train students for jihad. It is God’s will. If America is unhappy, it is not our problem. If you seize our weapons, we will fight with stones — American hegemony is unacceptable.”

Some tribesmen, however, seem to have less misgivings about the US presence. At least 300 American soldiers are camped about six kms from Azam Warsak in the Paktika province inside Afghanistan, at the the house of Mashadad Khan, whose family members were bombed by the US forces on suspicion of being Al-Qaeda or Taliban members while travelling in a convoy to another town. Mashadad Khan was arrested, but he was released a month ago by the Kabul authorities after the US forces were assured that he was innocent of involvement with either group. Today Mashadad Khan is being paid 3000 US dollars by the US forces as rent for his fortress-style house located in the Shakeen area. And he is not the only one. The US forces also pay 200 US dollars per month to guards from the Wazir tribe who have influence on either side of the border. “The Wazir tribesmen spy for the Americans,” said a source in Wana on the condition of anonymity.

The Wazirs aside, resentment against the US forces and Pak army troops is simmering in Waziristan. And there is much more happening than meets the eye. The houses in the area are built in such a way that no one can imagine what lies inside the compounds. One of the mud homes I stayed at — a large sprawling residential compound — was accomodating a family of 52. Another Pathan friend claimed that his house accomodates 200 persons. More ominous, however, is the fact that behind the mud-walls — most of them 20 feet high and two to three feet thick — are the residences’ private arsenals. While the houses, backyards are sometimes actually crops of field, in storage spaces reserved for the purpose are huge caches of arms.

Apart from mutterings there is, in fact, open defiance of the army-US troops combined presence and the authorities’ diktat. In Miranshah and its outskirts, for example, at least six religious schools are still operational despite notices by the political agent to close shop. “The madrassas’ administrations have told the political agent and army that they are not willing to close down their schools of Islamic learning. While they maintain they are willing to open the schools to inspection by local tribesmen and Pakistan army officials, American commandos are not acceptable on the premises,” said a local source.

Even as tensions rise, business goes on as usual in the markets of Miranshah and Wana. The people of Waziristan are mainly traders, but today most of the business is monopolised by the Afghans. The bazaars are full of smuggled items including automobiles. The latest Toyotas — unregistered ones — are available at a cost of anywhere from 120,000 to 200,000 rupees. These cars are mainly used as taxis in the tribal belt. Pakistan army soldiers in uniform were seen roaming in the Miranshah market stopping at music stores and enquiring about the rates of CDs and CD players.

In Wana, a video tape of the Afghan jihad between 1988-1994 is being distributed in the market. The tape has been dubbed in Urdu and Arabic, and seems to be an attempt to muster support for the Arabs who fought the Russians and the forces of Dostum and Rabbani side by side with their Afghan brethren. An Arab presenter urges the people to foil the attempts of vested quarters, who are bent on trying to oust the Arabs from Afghanistan. “It is a great conspiracy of anti-Islamic forces which needs to be foiled,” he says. Arabs who were martyred in the jihad also feature. The tape is apparently targeted to seek the support of the people of the tribal area for Al-Qaeda and Taliban members. Not that the public in the area need much prompting. So far they have gone along with the government and allowed the ‘outsiders’ — the Pakistan army and US operatives — into territory that was hitherto hands-off. But clearly, given the mumblings of discontent, this situation will not be allowed to remain as status quo for long.