Usually with group shows, there is a common theme or style that binds the various artists together. In the case of a recent exhibit at the Canvas Art Gallery, however, the unifying element was the letter ‘M.’ Featuring four artists, the show titled The M Factor includes works by Mohan Das, Maria Khan, Madiha Sikander and Madiha Hyder.

A graduate of the National College of Arts, Lahore, Madiha Sikander presented watercolour paintings, which proved that the medium is not just for painting idyllic landscapes or flowers. Take her ‘Time we spent/spend together’ — a large painting in which a young girl is depicted playing in the sea. The girl’s smiling face and bright red swimsuit contrast with the grey waves that surround her. Although on paper this image may sound mundane, the translucent washes of watercolour give the painting a dreamlike, ephemeral quality, as if the subject of the painting is a vague memory from the past. The composition of the painting too, which has the girl situated in the top third of the canvas with the water stretching below her and no sight of any other people around, creates a sense of isolation. The dreamlike quality is also evident in Sikander’s ‘To pluck a flower they call mean,’ which shows a child plucking bright pink flowers. The imagery again is commonplace, almost as if it has been copied from old family photographs, but the painting has been left incomplete and most of the canvas is stark white, making the flowers stand out even more. Some of the stems and leaves have not been layered with the darker washes so they appear to be fading and, as a whole, Sikander’s works are replete with a sense of wistfulness.

In complete contrast to Sikander’s delicate style of painting is Maria Khan’s collection of portraits. Predominantly using charcoal, Khan’s portraits of women veer into the realm of the grotesque. “My work revolves around deformity — showcasing larger-than-life, monstrous characters…” writes Khan in her artist’s statement. Contour lines around the face exaggerate wrinkles whereas the eyes are so darkly-rimmed with charcoal they look sooty. Interestingly, her paintings, although by no means seductive, are sexually charged. In one, the female figure turns to look at the viewer over her bare back and in another she seems to be lying back with her bra nearly falling off her. Black dominates the canvas but Khan also introduces colour through berries and flowers in the background. However, the flowers and fruits, which often symbolise fertility, youth and beauty in art, here only further emphasise the inevitable ageing of the female figures. 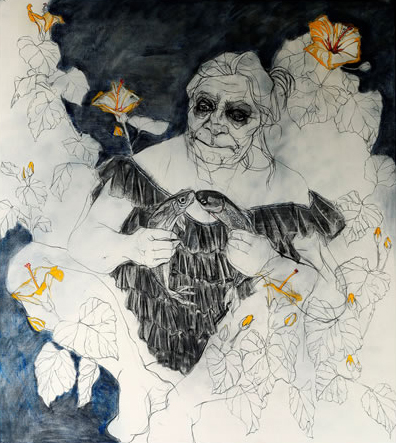 Madiha Hyder, who graduated from the Indus Valley School of Art and Architecture, Karachi, has on display a series of paintings in which the backdrops are made of newspapers. The paintings are very visually striking as the rich skin tones of the figures, done in oil paint, contrast sharply with the black-and-white digital print of newspapers. Her work seems to comment on the relationship between the personal and the political, but these paintings appear to be somewhat gimmicky and overwrought. In ‘Look on the bright side,’ for instance, a female figure is lying on a pile of newspapers. She is wearing sunglasses, and in one of the lens Hyder paints a woman crying while in another there is an outstretched hand. These are the kinds of works one often sees in student theses projects, and this collection would perhaps have been more meaningful if the images weren’t presented in such an overhanded way.

While Hyder’s work was extremely sombre, Mohan Das introduced some levity to the show. One of his most striking works was ‘Mona Jutt,’ rendered on a large, asymmetric canvas. In this pop-art inspired work, the iconic Maula Jutt from Lollywood is accompanied by Mona Lisa in a lehenga. The thick strokes of bright — neon even — paint bring to mind movie billboards, while the grid of tiny circles superimposing each of his works are reminiscent of Roy Lichtenstein’s famed paintings. In his previous collections, Das has heavily borrowed imagery from truck and rickshaw art but here we see the artist venturing beyond that while, at the same time, continuing to combine foreign and local influences in his work.

Although the works seemed a little disconnected from each other, especially those of Mohan Das, the figurative elements in each of the work became the common thread. And now that the Canvas Art Gallery has moved to a more spacious location, the four artists’ works didn’t have to compete for space.