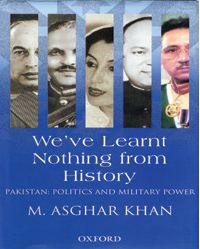 “We’ve Learnt Nothing from History.” This rather simplistic formulation of conventional wisdom would normally not excite much reflection. However, Asghar Khan’s book of this title with the subtitle, “Pakistan: Politics and Military Power,” touches you in a curious way. It is a sad book and this is not because the most prominent anti-hero of our politics has given us a poignant portrait of our history. What remains with you are thoughts about the author and his tragic excursions into the wilderness of our politics.

Otherwise, the book itself falls short of expectations. It has evidently been put together in a hurry and as Asghar Khan himself admits in his preface, the earlier chapters contain much of the book, Generals in Politics, which he had written during his detention in 1985. The excuse for this repetition is that the book was not allowed to be published in Pakistan at that time. In addition, there are “some fresh thoughts on the role of the armed forces and the state of politics in the country.” Moreover, these additions are mostly cursory in nature and include short, published articles.

One senses another, deeply personal motivation for bringing out this volume. It is “dedicated to my son Omar Asghar Khan (1953-2002) who shared my values and my hopes.” As a prologue, there is a brief but very evocative obituary of Omar by his childhood friend and colleague in his struggle for social development, Shahrukh Rafi Khan. What serves as an introduction is a profile of the author that was published in The Friday Times in December 1998.

Included in the appendix are a series of articles Ardeshir Cowasjee wrote in Dawn in July and August 2002, with the caption: “We never learn from history.” This is how the first of these columns begins: “The indefatigable old warrior of our skies is wounded, as sorely wounded as any father of 81 years of age who has tragically lost his eldest son, himself a father, under the most mysterious and peculiar of circumstances, a son endowed with much talent and intelligence with a future before him even brighter than his past. For this great tragedy that has struck him, his endearing wife, and his family, we can but express our most sincere condolences.”

Here are, then, intimations of a Greek tragedy. Its dramatic impact is certified by the fact that its personal element is woven into the wayward history of the country. In that sense, we should have expected an intimate memoir from Asghar Khan. He has certainly made a serious attempt to record his political journey, at times in great detail, but the book does not encapsulate his life’s experience.

Without any doubt, Asghar Khan’s political experience should serve as the mirror of a certain phase of our history. The story begins in earnest during the last days of Ayub Khan and its climactic episodes are located in the rise and fall of Zulfikar Ali Bhutto. Asghar Khan was persistently victimised during Bhutto’s reign and we have an explicit account of this confrontation. Their relationship is also the stuff of drama.

Though one can understand Asghar Khan’s predicament in being candid as well as objective about Bhutto, there is no attempt to come to terms with this challenge.

There is a six-page chapter on ‘The hanging of Bhutto,’ and it summarises the Zia-Bhutto equation. There is no first-person account of his feelings on Bhutto’s execution. After recording the event of April 4, 1979, he simply adds: “And so ended a turbulent career. We are too close to the times in which Bhutto lived, to assess accurately the impact of his life and death on the future of Pakistan.”

A valuable section of the book relates to the political role of the ISI and it includes the affidavit from Lt-Gen Asad Durrani, former DG, ISI, that listed the names of politicians who had received large amounts for their election campaign in 1988, in a bid to contain the People’s Party of Benazir Bhutto. Asghar Khan also notes that the Supreme Court has left the case in cold storage since 1999. The case was prompted by his letter to the Chief Justice to ask him to take suo moto notice of allegations against service personnel.

We have some interesting anecdotes from the period that covered the Bangladesh crisis and the movement against Bhutto in 1977. Details of Asghar Khan’s lonely and brave struggle in West Pakistan to highlight the grievances of East Pakistan and the stupidity of an army action are full of pathos. It was this stance in particular that vindicates Asghar Khan’s moral position as a politician. But he has not explained why his party decided to participate in elections that Yahya Khan announced in late September 1971 to seats that had been won by the Awami League in the 1970 general elections.

There are also some surprising misstatements. Bhutto was in Dhaka when the army action began after midnight on 25/26 March. He writes: “On his arrival in West Pakistan a few days later, he was to say, ‘Thank God, Pakistan has, at last, been saved.’” But Bhutto had reached Karachi on March 26 and not a few days later. And his quote is not the same as recorded. On page 53, he writes about the surrender of “about 93,000 servicemen,” but on page 65, he refers to “the release of over 93,000 prisoners of war, of whom 15,000 were civilians.”

The point here is just that the book is uneven and unstructured in its design. Some recent articles have been included to justify the projected scope of the narrative. That is how a chapter on ‘General Musharraf’s Five Years in Power’ is meant to complete the picture. However, the subject of ‘Jihad’ and the United States is covered in less than three pages.

All said and done, Asghar Khan will remain a central character in Pakistan’s political history. A man of integrity and character, it is necessary to understand why a person of such sterling qualities and experience was not able to stage a victory on the political front. How does his failure as a politician relate to our prospects as a civilised and democratic polity? This is the thought that you are left with. And it depresses you.