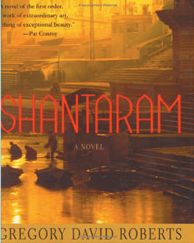 Shantaram is a book I was skeptical about from the beginning. It seemed too much like a man trying to cash in on his criminal activities and it read like a real masala story, much like the myriad Bollywood films. I can imagine why my friends who come from the west were fascinated by the book. They had not seen any three-hour long Hindi film! In fact there are numerous fan clubs springing up all over the place and Johnny Depp is to make a movie of the book! But to give the author his due, the narrative is compelling.

Crime and punishment, passion and loyalty, betrayal and redemption are only a few of the ingredients in this massive, over-the-top, thinly disguised autobiography made to read like fiction. Roberts travels from a prison in Australia to the slums of Bombay, from the beaches of Goa to the killing fields of Afghanistan. Along the way he meets up and forms relationships with many characters. Some of the tale is magical, and some repulsive, bordering on the purple.

Roberts escapes from a maximum-security prison in Australia . He is an addict and was involved in some serious crime and armed robberies to support his habit. While in the prison, he is subjected to torture and abuse. His daring daylight escape makes him Australia’s most wanted man. Using an alias, ‘Lindsay,’ he enters Bombay by attaching himself to a group of tourists to pass customs and immigration. Here he comes in contact, almost immediately, with Prabaker, a young man claiming to be Bombay’s best city guide. Prabaker is his guide into the inferno that is the Indian milieu of the early 1980s. Lindsay, or Lin, as he comes to be known, meets and befriends many engaging, vivid characters.

With Prabaker he takes up residence in a sprawling illegal slum of 25,000 people and becomes the resident “doctor.” With a prison knowledge of first aid and whatever medicines he can con from doing business with the local mafia, he sets up a practice and is regarded as heaven-sent by these poor people who suffer from rat bites, dysentery and anaemia. He falls in love with Karla, a beautiful Swiss Ã©migrÃ© and, through her, meets a group of European expatriates who are involved in all kinds of shady activities. Roberts asserts that things work ‘differently’ in India and the line between legality and illegality is an indistinct one.

Lin’s illegal status in the country eventually forces him underground. Gradually, he comes to know the people, their culture and their language, and makes money through procuring hashish and doing black market money exchanges for tourists. Lin constantly lives on the edge, be it helping dozens of Afghan and Iranian refugees reach their promised land by forging passports, or smuggling guns, gold, explosives and medicines to Afghan mujahideen. Indeed he does everything he shouldn’t be doing, including bit parts in inane Bollywood films like Paanch Paapi. He even gets a new name, Shantaram, from village women in a north Maharashtra hamlet where he stays for five months.

There is a kind of laconic humour, filled with explicit Indian obscenities in the often sharp dialogues. Also very apparent is the author’s fondness for the gangsters, prostitutes, prisoners, slum dwellers, petty criminals and debauched westerners who people his Bombay. Roberts’ descriptions of Bombay’s vast slums are informative and he offers a somewhat heartfelt appreciation of the spirit of its dwellers. His insights into daily life are those of an assimilated immigrant with observations about folk remedies, the extra-legal system of justice, the music and dance that infuse daily life and the nature of work among the lower castes.

Lin works as a counterfeiter, smuggler, gun-runner and street soldier. He comes face to face with men who slice faces to shreds, gouge eyes, spread hacked limbs around houses, split guts open. Then there is also the tale of Lin holed up in a freezing cave with Afghan freedom fighters as the Russian army approaches, sharing rotten food and life stories with men soon to be ripped apart by mortar shells.

When Robert/Lin/Shantaram leaves India he is captured in Germany and extradited to Australia. In an interview he says that he started writing the first draft of Shantaram while serving his prison term. Roberts had penned about 350 pages in two and a half years of work when “a very unhappy prison officer” decided to make him “unhappy.” The officer tore the manuscript into pieces. “He was probably the harshest critic I have ever had,” he joked later.

Roberts then spent another three years writing another 350 pages before another prison guard tore up the draft a second time. “I sat in bed and I was very close to that red vision rage when you just lose control. And I thought, if I do lose control, it will not be just the writing but also the writer who will be destroyed. And, so long as the writer is alive, he can keep working. So I found out the prison officer who did it. I went to him and said, ‘I know you are the one who did it and I forgive you.’”

For a man who spent much of his adult life fighting, cheating, killing, to have created a novel that is effective and impressive to the western reader says much about the romanticism that such readers have about India. The question is, will the Johnny Depp film be any different from our dishum-dishum, Chandni Bar rolled into a what-have-you film? And who says crime does not pay?