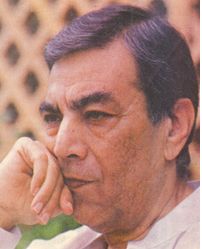 Q: Not too much time has gone by since NAPA was established, but how would you describe the experience so far?

A: We are getting through the teething problems, which it would have been unnatural not to have. All children have these problems unless they are retarded.

We are still trying to find the best way to give the kind of instruction that our students deserve. The reason is simply this, that when it comes to theatre arts and music, most of the terminology is in English. Most of the concepts relate to not necessarily Greek tragedy, but to European drama or the cycle of mystery plays, the origin of drama. This happens to be in English or Latin or French or Italian.

For our students, it would be totally counter-productive to give them instruction in English or even give them terminology because they do not relate to it. Not only should terms be translated into their language, but the concept has to be made known in such a way that they can relate to it. It’s pointless saying ‘in an amphitheatre’ or ‘in an arena.’ When it comes to theatre arts and drama, their exposure has been nothing more than the most dreadfullymade serials on television.

Q: How do you deal with this problem?

A: We had no syllabus in Urdu, but we are preparing one. Whatever syllabi I had devised went overboard within a matter of four or five weeks, so immediately we sat down with the faculty.

We had to tell our students that it is important for actors to learn how to breathe. It is important for them to know where their diaphragm is and what the difference between larynx and pharynx is. For this, we do not need language.

But they must acquire some theory, along with the practice. It’s no good starting them off to rehearse on a play when they don’t know what the structure of the play is going to be or should be. And how over the ages, drama has come to assume the form it has today. They have to know, otherwise they can’t call themselves students of NAPA.

Q:Would you be looking at the western tradition as well as the eastern?

A: We have no tradition like the tradition of Sanskrit drama in India or the Noh play in Japan. The Sanskrit dramas were tied up with matters religious and ritualistic, in exactly the same way that all western dramas dealt with matters of Christianity, with the morality play, plays dealing with Christ’s passion and even Christ’s crucifixion, which is what gave rise to the re-enactment of that particular thing. Humaray hanh tou enactment nahin hota.

And then, essentially, all great theatre is conflict, but we say there is no such thing. Because conflict means questioning, and the moment you question, there is trouble.

If you were to set up an institute for painting, this would be much easier, you teach them the basic line, a sense of colour, give them a concept of what perspective is all about and then you show them hundreds of thousands of works of painting that have occurred.

For drama, we have no tradition. Magar shauq tau hai. That is why so many students who want to study acting, direction and stage management come to us. What we want to do is to professionalise the work, because they have not learnt to understand their craft.

Commercial success is a different thing. Your face may be a household name and you can suddenly become a star. In our profession we say there are actors and then there are stars. Stars are those that fly by night. As long as aap ki patang charhi hui hai, you are one. Aap ka mulamma khatam ho jata hai, phir aap kahan kai reh jatain hain?

Q: Has the NAPA experience been positive so far?

A: When the first term was over, I heaved a sigh of relief because we went through an entire semester without anything too problematic happening. As to what we were able to impart, mujhe yai laga kai hum kuch bahot zyada unko nahi bataa pai. When we looked at the tests we had the different members of faculty give, we found that people had not really grasped as much as we would have liked them to. I thought very, very seriously that it would be entirely counter-productive to enter them into the second semester. So we were able to convince many of the students to take a refresher course or to stay back and go through it again.

It’s no good telling them one, two, three, four, five pieces, tell them to rattofy it and then to reproduce it in the exam. The important thing is that they must feel that, “I must learn some more, I must acquire within me, a capacity to want to learn.” When they do that, then they are hooked.

It is like the process of osmosis, you begin to absorb, and osmosis is a very slow process, where you get crystalized after a long time.But something needs to take root within you, so that it grows.

Q: Do you find that your faculty also need to reorient themselves?

A: They are are not trained teachers. But each one of them is a distinguished person in his own right and they have been working at it for 20,30 , 35 years. Laikin unnai khud mehsoos kiya kai hum iss tarah modify karein, aise karain, aise karain. The only thing I keep telling them is that we who are going to teach will learn far more from the students. And this is what they’ve learnt, to reorient their entire thinking.

Q: Will the students perform in public?

A: I do not wish for my students to have any public exposure for the first year. What happens at school performances, they are all applauded very generously. Naturally, there is a very interactive audience, with aunts, uncles, cousins, friends, and they begin to feel that they are pretty damn good, that what they are doing is pretty all right. They will tell you, “acha aap kehte hain, magar woh to bahot taareef kar rahay thay.” And this is the worst aspect of Pakistan.

They feel we are being critical, but they must learn that what they are doing is simply not good enough, even when they are showered with praises. We have to be unkind only so they can be challenged.

Q: Your thoughts for the future…

A: I don’t know how long I’m going to be here. I am very keen that I set some kind of aesthetic standard for whoever is going to come along after me. If we do not set an aesthetic standard now and those very strict standards of judgment, then we will begin to hand out diplomas too easily. Whereas the diploma given by NAPA should be an absolute gem, the students should cherish it, because they should by all accounts have acquired so much experience.

Q: Where do you see them going from here?

A: I hope at least one out of a hundred or one out of a thousand will be hooked, and would like to do nothing but theatre. To direct, to act, or be working professionally in a theatre. But the rest of them will find work in television, in radio, all kinds of allied things — not necessarily as stars, but even as directors and script writers and playwrights.

One of the things, which I began to find appalling is the level of play writing and script writing we see. Its all very banal, all very superficial, very cliche. The same tried out themes, ladki ki shaadi nahi ho rahi hai, vaghaira vaghaira. It’s understandable, the moment you do daring things, you get a lashing from everyone. However, they must dare, they have to dare. My sole desire is that these people who’ve gone through NAPA should all learn to dare. They may fall flat on their faces, but unless you dare, you’re not going to be able to do very much.

Q: Is there is a plan to introduce dance?

A: Yes, otherwise how can I call this an Academy of Performing Arts. Music, theatre and dance are the only three performing arts, contrary to what people think. Film is not one of them, it is an allied art.

We will begin the discipline of dance in a very modest way and we will go in accordance with the kind of instructors we get. We must get really good teachers — and my really good is something that should be 348,000 times better than excellent, otherwise it’s bad.

We have Saadia now, she’s going to be taking the dance classes, because that is the discipline she spent five years on.

Q: What about the taboo on dance?

A: Taboo dance pay hai, dramay pay bhi hai aur ladkion kay bahar nikalnay pay, woh to chale ga. We have amazing contradictions in our society. We have some girls who are telling you how to wear the latest creations of Lancome or the House of Valencia. And then you have a woman by the name of Mukhtaran Mai, who is raped at the behest of a panchayat. Her brother has had an illicit relationship with someone, the only punishment is that his sister be put to shame publicly. This is not just a feudal society, this is tribal, ritualistic justice. So let’s not get into that.