An orange blaze engulfing parts of Baghdad, the roar and thunder of warplanes, the deafening explosions of massive bombs — all have been brought into my bedroom through live television transmissions.

Yet, even round-the-clock images of war — menacingly advancing allied soldiers with state-of-the-art weapons, the faces of hapless Iraqi civilians, devastated cities and towns, and the omnipresent shadow of death — offer only a tiny glimpse of the true horrors of a war in the 21st century. The real magnitude of peoples’ suffering and the cries of the innocent are drowned out by the incessant babble of ‘experts’ and ‘analysts,’ their voices modulated to counter the boom of yet another fleet of bombers in the sky, on yet another deadly mission. Listening to them, one wonders, are they talking about war — a game of death and misery — or presenting a running commentary on a Rugby match.

The soldiers, moving tanks, exchange of artillery, small-arms fire and bombs are not footage from some Hollywood blockbuster. They are only too real. The storyline drawn out by western channels is reality in its worst form. Flesh, blood and iron, like something straight out of a film. Pulp fiction.

Ostensibly, this is a war for the liberation of the Iraqi people. It has been sparked off by the white man’s burden of giving democracy and liberty to the wretched people of Iraq, by the need to oust a tyrant. We have read and heard similar moral stories in every imperialist war, be it in Vietnam, Korea, Cuba or Afghanistan. The United States always has a high moral pretext to bomb and kill.

The media closely follows the Washington-drawn line. In this war, propaganda has been taken to such an extreme that it exposes all the so-called western values and ethics of fair, impartial and objective journalism.

They talked about a peoples’ revolt in Basra, which never occurred. They flashed a story about a city taken over by the allied forces, which were still battling Iraqis miles away from it. The bias, the blatant lies, the tainted picture made itself too plain, too obvious.

The conflict, triggered by the world’s sole superpower, made it clear that present-day leaders such as US President George W. Bush, are perfectly capable of reverting to the era of savage war-mongering that we thought we had put behind us. The spectre of Adolf Hitler and Dr. Joseph Goebbels stares us in the face, as a horrendous scenario unfolds in Iraq.

The tools of propaganda are out and about. Target Iraq, war on Iraq… various television channels came out with saucy titles to sell their war coverage as tens of thousands of people marched all over the world to oppose the war.

The voices of peace were not heeded, numerous as they were. They could not prevent or stop the war and were swamped by Bush and his think-alikes. 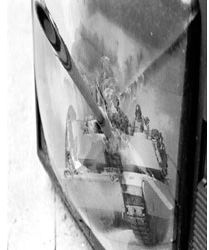 The people reporting and presenting the war are full of excitement and seem to be enjoying what they see. But their coverage is not presenting the whole story and gives only a sanitised view, from the western perspective.

“Saddam Hussein is sacrificing innocent lives for his own safety,” a commentator said on CNN. He was suggesting perhaps, that the Iraqi government and armed forces should have laid down their weapons in front of the invading allied armies.

Reporters who have dared to challenge the official line have been dismissed from their jobs, including the award-winning news correspondent Peter Arnett, who worked for NBC.

The western electronic media are downplaying images of civilian casualties, bodies of allied troops, and US and British soldiers taken prisoners. Going by their journalism ethics, showing Iraqi prisoners of war on television is just fine.

However, when the Qatar-based Al-Jazeera showed allied bodies and US prisoners of war, it invited US wrath. American Defense Secretary, Donald Rumsfeld, said it would be unfortunate if television networks carried such pictures. The US networks were quick to follow the lead. Doublespeak is the name of the game.

One of the major debating points for concerned parents in the western world that emerged, was whether they should shield their children from watching the war on television. Western experts say these images can be very distressing and frightening for children.

The US and British networks have yet to discuss the Iraqi children who are caught in the bombing in Baghdad, Najaf, Umm Qasr, Basra and Nasiriya. They seem to have no idea of the mental trauma, which this war, the bombings, the devastated homes, mutilated bodies and wounds, have brought to the Iraqi children.

While the one-sided war coverage is creating outrage in the Muslim world, it is being used as a sophisticated propaganda device to tell white lies by the hardliners and extremists in the US and British governments, who want to win the war at any cost.

The live war coverage is being fully controlled and manipulated to swing public opinion in favour of the war in the United States and Britain. The latest opinion polls show that more than 50 per cent Americans back the US strike on Iraq.

However, if the war drags on, the media, despite its one-sided coverage, could turn against its own masters. US television coverage of the Vietnam War in the 1960s and 1970s, though not real-time, proved to be a major factor in fuelling the anti-war movement in the US. Unfortunately, however, it took almost two decades to touch American hearts.

Iraq, on the other hand, may not be able to wait that long. Despite the unprecedented explosion of information technology, the world’s sole superpower appears better placed to crush any dissent, at least for the time being, than it was during the cold war era when it faced tough competition from the former Soviet Union.

With words of sympathy and consolation for Iraq reigning supreme on the unjust war, especially in the Muslim media, Baghdad has shown the world that it can cry freedom even from the smouldering ruins and mangled bodies of its victims.