When former US president George H. Bush proclaimed the inauguration of a new world order a dozen or so years ago, the rhetoric rang hollow. There was indeed a profound international transformation under way at the time, with the largely peaceful demise of Communism in Eastern Europe and the Soviet Union, which in turn sounded the death knell for the Cold War. The campaign to evict Iraqi forces from Kuwait, meanwhile, enabled the US to fulfil its deep-seated desire to establish an open-ended military presence in the oil-rich Gulf.

Yet these significant changes, including the launch of a peace process of sorts between Israel and the Palestinians, did not quite add up to a new order. The powers-that-be were, in fact, busy improvising on the old one. And, ironically, the USSR’s suicide posed a serious dilemma for those who despised it most: unreconstructed cold warriors such as Dick Cheney and Donald Rumsfeld, who had been associated with Republican administrations in Washington since the Nixon era, were deeply unnerved by the loss of an obvious enemy.

They are no longer burdened by such concerns. The 21st century’s opening years have been kind to their tribe. Suddenly, the United States of America is besieged by foes. The Axis of Evil is just the tip of the iceberg. And neo-conservatives such as deputy defence secretary Paul Wolfowitz and Pentagon adviser Richard Perle must consider themselves particularly fortunate to be serving — perhaps manipulating would be a more appropriate term — a commander-in-chief virtually incapable of thinking for himself. So what if he had to be thrust into the presidency (not against his own better judgement, but against the will of the American electorate?) Democracy, after all, isn’t high on the list of neo-conservative priorities.

And now the very folk who succeeded in defying the popular will in their own country expect the world to believe that they will deliver democracy in Iraq.

Their hubris and their chutzpah are beyond belief. Fortunately, it appears unlikely that their vision of the world as a conglomeration of nation-states politically subservient to Washington and economically at the mercy of American corporations shall come to pass, despite all the firepower available to the US as a means of imposing its will.

Although the invasion of Iraq was being plotted well before the terrorist attacks of September 11, 2001, there can be no question that those atrocities facilitated the pursuit of policy objectives that may otherwise have remained in the realm of wishful thinking. Remarkably, Wolfowitz advocated an immediate assault on Iraq — not alongside, but instead of tackling the Taliban.

An explanation for this bizarre recommendation may lie in the assumption that whereas Mullah Omar and his rag-tag battalions posed no direct threat to Israel, the Israelis have always been nervous about Saddam Hussein. And a defining feature of the neo-conservative clique surrounding George W. Bush is their blind devotion to Zionist fundamentalism. Which is why one can be more or less certain that the road map to Middle East peace promised by the US and British administrations as a sop to Arab public opinion will not lead anywhere that Ariel Sharon doesn’t want it to.

On the other hand, it is likely that as the second Gulf war drags on and gives way eventually to American occupation, Iraq will increasingly begin to resemble Palestine. The initial indications are already discernible in the south of the country: suicide bombings, as well as checkpoints manned by gun-toting representatives of the occupying forces. And it comes as no surprise that US marines expected to engage in house-to-house combat in the battle for Baghdad received instruction in the finer points of urban campaigns from experienced Israeli officers.

Even more predictably, the aggression against Iraq has inflamed Arabs in neighbouring states, a substantial number of whom — including Iraqi exiles who escaped Saddam’s repression — are determined to serve as suicide bombers or combatants against the invaders. The postwar plan for direct military occupation with Americans at the helm in every sphere, supported in an advisory capacity by Iraqis such as the convicted embezzler Ahmed Chalabi, will only serve to further inflame popular opinion. As a magnet for belligerent Islamist militants, Iraq could well become the Afghanistan of the 21st century.

The small but growing number of Arabs who deify Saddam do so because, unlike most other Arab despots, he proved himself capable of standing up to the almighty US. In the aftermath of the war, should a democratic urge manifest itself in nearby states, it is likely to be directed against potentates who bow to Washington’s every whim. And it may be coloured by more than a tinge of Islamism.

That, presumably, isn’t quite what Uncle Sam had in mind. At the same time, notwithstanding Rumsfeld’s recent warnings to Syria (the only neighbour with which Israel hasn’t been able to conclude a peace treaty) and Iran, it is unlikely that the neo-conservatives will succeed in making a case for further US military adventures in the region following their series of miscalculations over Iraq.

In large part this is so because suspicion of American motives and resentment towards its strategies isn’t, by any means, restricted to the Arab world. During the past couple of months, the entire globe has erupted in protests against US designs. And although opposition to the war has visibly receded in Britain and the US since the outbreak of hostilities, it remains high elsewhere — most notably in Italy and Spain, whose conservative prime ministers have signed up to the Blair-Bush project without committing any troops. They find themselves at loggerheads with France and Germany, whose governments have spearheaded opposition to the war (albeit perhaps not for the noblest of motives) both within and outside the United Nations.

Where does that leave the European Union? At loggerheads, obviously, with Tony Blair and Jacques Chirac making no secret of their distaste for one another. The difference between them is that whereas Blair is broadly associated in Britain and elsewhere with servitude to Uncle Sam, Chirac, despite the sleaze scandals that have dogged his tenure as the mayor of Paris, has been catapulted to unprecedented heights of presidential popularity in France and tends to be viewed with pride elsewhere in Europe. Were an extraterrestrial to land in Mitteleuropa or anywhere else on the Continent and say, ‘Take me to your leader ,’chances are that she would be directed towards the Elysee Palace rather than No.10 Downing Street. 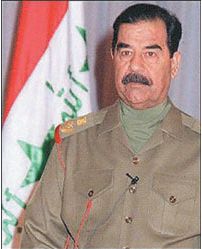 Chances are that the EU will emerge relatively unscathed from its present ordeal, not least because Europeans at large are generally in agreement with Chirac’s stance. Britain may be an exception — but, then, it has always been thus. A future British government may be called upon to decide whether it values the Anglo-American alliance more than its relations with Europe. And it can only be hoped that Blair’s successor, with the benefit of hindsight, will be able to choose the more sensible path.

But whereas the EU can, if necessary, carry on without Britain — and perhaps even posit itself eventually as a rival power to the US — NATO in its existing form is hard to conceive without the Anglo-American component. But, then, NATO effectively lost its raison d’etre once the Warsaw Pact evaporated, and it continues to exist chiefly because the US is unwilling to give up its military foothold in Europe. The organisation hasn’t directly associated itself with the Iraqi venture, and this would be an ideal moment to put it out of its misery. If the EU feels it needs a standing army, it ought to set one up and insist on the removal of American bases — from Germany to start with. Any British government with a bit of spine would eventually seek to follow suit.

Unlike NATO, the UN has already been gleefully obituarised in print by the likes of Dick Perle, because in the neo-conservative scheme of things there can only be room for such an organisation if it unquestioningly obeys every American command. However, the real weakness of the UN has been exposed not by its redemptive refusal to acquiesce in the invasion of Iraq but by its failure to stop the war despite overwhelming international opposition to the project.

The obituaries may be premature, but the UN’s future will depend on the extent to which it can be restructured and revitalised in the years ahead, while keeping the US within its fold. Even under ideal conditions that wouldn’t be an easy task, and it may well be complicated by other nations, seeking to follow the recipe for international anarchy inherent in the concept of ‘pre-emptive’ military adventures. Regional hegemonists such as India and Israel were visibly heartened by the Bush doctrine. Should Washington ever feel the need to smite Pakistan — to pre-empt, for example, the possibility of an Islamist hand on the nuclear button — it may relish the prospect of allowing New Delhi to do the dirty work.

There can be little doubt that Bush the Younger, under the guidance of his extremist advisers, seeks to usher in the new world order promised by his pater. However, the shape this order assumes will depend substantially on whether George Dubya’s Great Iraq Adventure follows the script outlined in Empire-Building For Dummies. Initial indications — as well as the Afghanistan example — render that unlikely. It will be determined also by the resistance the rest of the world is able to put up. It is not just China, Russia and France that the would-be emperor has to contend with, but also a popular movement stretching across all continents, including North America. A movement repelled by the idea of using force to make the world safe for corporate capitalism. A movement that finds it unacceptable to, in effect, say to people anywhere on the globe: “We are going to share with you the secrets of American democracy, but we may have to kill you first.”

The world’s future is crowded with uncertainties. It may take years for the fog to disperse and the clouds to clear. But once they do, the sight that greets the neo-conservatives may not be entirely to their liking.