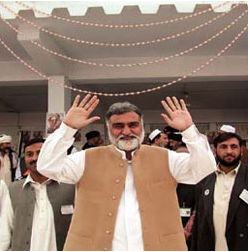 On the recommendations of the Council of Islamic Ideology (CII), the four-month-old Muttahida Majlis-i-Amal (MMA) cabinet in the NWFP, has approved reforms for the introduction of the Shariah laws in the Frontier. The main features of the bill, according to the NWFP chief minister, Akram Khan Durrani, are to “Promote Islamic society, ensure justice, improve law and order, and bring about an end to corruption and obscenity in society, in order that the present judicial system be replaced with one according to the Shariah.”

Reports indicate that the MMA government has prepared several resolutions asking for the imposition of the Qisas and Hudood laws, abolition of interest-based banking, the appointment of ulema judges in the High Court, the restoration of Friday as the country’s official holiday, and steps to curb obscenity in the electronic media, etc. Once presented and approved in the assembly sessions they would be forwarded to the federal government for action.

The reform package, however, remains ambiguous on exactly how it would be implemented, as MMA leaders chose to reveal only the broader strokes of the policy.

Announcing the proposals of the Nifaz-i-Shariat Council, formed to make recommendations for the Islamisation of the province, the chief minister said, “We are introducing the Nifaz-i-Shariat Act in the Frontier, which will make Shariah the supreme law in the provincial sphere. All directives will be derived from the Quran and the Sunnah.” This implies that the courts in the Frontier will be obliged to interpret provincial laws in accordance with the Shariah. No specification, however, over which provincial laws were going to be affected, was given.

“Civil and criminal laws are federal laws, and as such, the provinces will have no jurisdiction over them,” says advocate Qazi Anwar. “As the Pakistan Penal Code, Criminal Penal Code and the Constitution are part of federal legislation, the only law to come under the provincial jurisdiction is the Pre-emption Act (1950).” According to Qazi, however, “This act has already been amended in light of the CII recommendations in 1986 and as such the titles of judges might be changed, from Justice to Qazi, as has been the case in the Malakand Agency, after the proclamation of Nizam-i-Adl Regulations.” A member of the Nifaz-i-Shariat Council’s Shariat Committee, MNA Dr Ata-ur-Rahman of the MMA, also issued a statement saying that although, under the new bill, all provincial laws should conform to the Shariah, in reality only a few provincial laws would be affected.

The chief minister also announced the introduction of the Hasba Act in the NWFP assembly, which deals with the appointment of an ombudsman at the provincial and district levels. The district and provincial ombudsman, he said, would take suo moto action on any public complaint. This, it is envisaged, would improve the law and order situation and decrease the case load of the judiciary.

However, the chief minister added that besides affecting legislation in the provincial assembly, the new package would also empower the NWFP assembly to pass resolutions asking the central government to review federal laws, and bring them in line with Islamic ideals. Administ-rative directives have also been planned for creating employment opportunities, promoting cottage industries, constructing small dams in the private sector, promoting meritocracy, the provision of free education to secondary level, and putting an end to corruption, etc.

Durrani has also reiterated his resolve to ban the display and publication of obscene pictures. “Exhibition of sensuous pictures arousing sexual desire will be considered a crime,” he stated. “Women will not be allowed to be used as models.” He also announced a separate university and medical college for girls. The chief minister asked government officials to pray and enjoin the importance of performing this religious duty upon their subordinates. An order for ministers and officers to offer prayers five times a day was immediately issued by the NWFP government following this statement. The chief minister also urged traders to close their businesses at prayer times. Akram Durrani also pledged to use the print and electronic media for the purpose of improving morality. He urged newsmen to present the MMA’s efforts in a positive light, and in so doing, contribute towards the formation of a better society.

Intriguing, however, is the MMA government’s decision to keep many details of the drive secret, as is the government’s attempt to hide the proceedings of the Nifaz-i-Shariat Council meetings from the public. Even during his press briefing, the chief minister remained silent on the course of action to be adopted for the introduction of the Shariah. This silent strategy has been adopted by the rest of the MMA, including the Nifaz-i-Shariat Council’s chairman, Mufti Ghulam-ur-Rahman, who has repeatedly refused to disclose the council’s recommendations. Insiders claim that the MMA leadership has decided to keep the report confidential until its submission to the NWFP assembly for approval.

Until then, how the MMA government plans to implement its intentions to put an end to obscenity and co-education, impose Qisas and -Hudood laws and appoint Ulema judges to the High Court — to name a few controversial changes — will remain shrouded in mystery for the nation.