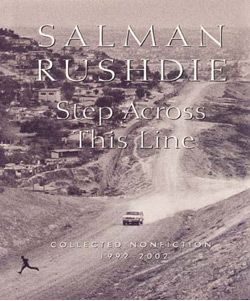 Step Across this Line is the evocative title of Salman Rushdie’s latest collection of non-fiction writings. Like his earlier work, Imaginary Homelands, this book, too, is all about displacement and homelessness. Rushdie draws on the story of The Wizard of Oz to explain: “The truth is that once we have left our childhood places and started out to make up our own lives, armed with what we have and are, we understand that the real secret…is not that ‘there is no place like home’ but rather that there is no longer any such place as home.” Once one steps across the line, home is “anywhere, and everywhere, except from where we began.” Well, so far so good. Beyond the title, however, the collection is an imperfect medley of reprinted columns from newspapers and magazines — some of which, one might say, do not deserve to be preserved.

The centre of the collection focuses on his post-fatwa years, in which he recalls the events and the issues that led to his transformation from famous writer to global celebrity. The over-riding metaphor of his two Yale lectures, documented in the last part of the volume, is the ‘fixed and shifting’ line against which he chooses to view human existence. Rushdie questions how human beings cope with artificial, man-made dividing lines. His answers, however, smack of naivete, and he manages to mix up the idea of freedom with the concept of the frontier-less migrant — the archetypal figure of present times, “the quintessential citizen of the world.”

It is fair to say that Rushdie is, beyond doubt, a brilliant novelist. His last two novels notwithstanding, Midnight’s Children is superbly crafted and projects a fantastic play on the English language. However, columns and essays do not allow for the magic realism he has introduced into South Asian English prose, which has in effect created something of a renaissance in the literature emanating from these parts. In fact, the columns are the weakest link in the book, especially those on Elian Gonsalves and Joseph Lieberman, which are inconsequential and boring. Amidst the jumble of ideas, are also short essays on the Taj Mahal, Gandhi, the rock band U2, the Rolling Stones and soccer, which, the reader is repeatedly reminded, Rushdie loves.

After Rushdie, South Asian English writing took on a life of its own. Perhaps this explains the supreme arrogance he displays in the essay ‘Damme, this is the Oriental Scene for You,’ in which he presents a rather flawed argument: “Prose writing — both fiction and non-fiction — created in this period (i.e. the fifty years of Independence) by Indian writers working in English is proving to be a more interesting body of work than most of what has been produced in the sixteen ‘official languages’ of India, the so-called vernacular languages, during the time.” This one statement in one fell swoop relegates writers like Amrita Pritam, Quratulain Haider, Ismat Chugtai, Mahasveta Devi and many others to mediocrity just because they do not write in English, or have not been effectively translated into the language. Rushdie does seem handicapped by the fact that he has not read anything in his mother tongue. This reminds one of the days of the raj, when ‘brown sahibs’ took special pride in not being able to read the ‘vernacular.’ Not only is this Rushdie’s loss, but it also makes him come across as pompous and overbearing.

The more readable essays in the collection are those on literature. His pieces in defence of the novel, on Edward Said, and on the influence of Calvino on his novel Haroun and the Sea of Stories is comprehensive and insightful. “I reread Calvino’s great trilogy, The Baron in the Trees, The Cloven Viscount, and The Non-existent Knight, and they gave me the clues I needed. The secret was to use the language of the fable while eschewing the easy moral purpose of, for example, Aesop,” he writes. Rushdie, however, cannot resist taking a swipe at Coetzee’s Disgrace, which beat him to the Commonwealth Prize for Literature. His musings on Arundhati Roy, Faiz, Baburnama, and yes, even Crouching Tiger Hidden Dragons, are very superficial. His invectives against Karachi as being a ‘blinkered monoculture’ exposes his ignorance of the city’s cosmopolitan character.

Ever since 9/11, Rushdie has been in great demand for his thoughts on Islam and terrorism. Not only is he now a bonafide resident of New York, but his columns have also been widely syndicated. He has thus been completely co-opted by American journalists desperate for an insight into the workings of the Muslim mind. Rushdie has benefited from the fatwa, which transformed a struggling writer into a figure, ‘embodying the persecution of intellectuals by the Muslim world.’ Rushdie exploits this to the hilt. He takes great pains to project America as a compassionate and caring imperial power. Anti-Americanism is, according to Rushdie, ‘appalling rubbish’ and all those who are anti-American are ‘fools’. He doesn’t comment on America’s relentless justification of dictators serving its corporate interests, or even the challenge to its foreign policy at home. Rushdie’s caustic criticism gives way to a rather sanitised version of the workings of the world.

Rushdie certainly has changed. When he was British, he despised the subcontinent that he had left behind. Now that he is American, he criticises Europe with equal equanimity, “The new Europe has looked to me like not a civilisation but an altogether more cynical enterprise. EU leaders pay lip service to the Enlightenment ideals — free expression, human rights, the right to dissent, the importance of the separation of Church and State. But when these ideals come up against the powerful banalities of what is called ‘reality’ — trade, money, guns, power — then it’s freedom that takes a dive.” Rushdie might do well to open up his eyes to the fact that this sounds more like a description of his new-found homeland, America — not Europe. Rushdie disappoints sorely by transforming into an apologist for this ‘new’ land he has stepped into. Clearly he has crossed the line.