The ongoing war against terrorism has brought both bombs and roses to the mountainous region of Shakai in South Waziristan. In April, the dry mountains were showered with rose petals to celebrate a truce between Pakistan’s military commanders and local pro-Al-Qaeda militants. They hugged each other and pledged to cleanse the tribal belt of foreign militants. Only two months later, the two sides are at daggers drawn, bullets and bombs are replacing rose petals. Jets and gunship helicopters circle the air while militants on the ground vow to wage jihad against thousands of security forces.

Since October last year, tribal leaders and authorities have explored different strategies on the political chessboard. A negotiation process, involving jirgas, was initiated to expel or capture foreign militants in hiding and to penalise their supporters.

The jirgas announced the formation of lashkars, or tribal militia, to rout them out, and the government announced amnesty for the five most wanted militants in return for a pledge that they would not fight alongside Al-Qaeda guerillas or use Pakistani soil for terrorist activity.

Within days, promises were broken, and the Shakai Agreement, struck with the help of local influential clerics, lay in tatters on the negotiating table, nullifying all efforts to defuse the crisis through talks.

Nek Mohammad, the leader of the local militants, announced he would continue to wage jihad. He refused to help register the foreigners, blaming the authorities for changing the terms of reference of the deal.

Insiders say the Al-Qaeda leadership in the tribal areas had warned local militants against striking a deal with the authorities. According to a militant, the message said, “We are born to sacrifice our lives in the name of Allah, not to indulge in deals to save our lives.” “Either be a mujahid or be with the Americans and their supporters.” The message led to Nek’s hastily announced jihad and rocket attacks on military check-posts and bases, triggering a large scale military operation.

Thousands of military and paramilitary troops launched a five-day operation in South Waziristan with the help of gunship helicopters, killing more than 80 militants, mostly foreigners. Seventeen soldiers lost their lives in the operation.

But the big success for the military came when the permanent irritant, Nek Mohammad, was killed in a guided missile attack after tracing a satellite phone call from his hideout in Doag village, just outside Wana.

As thousands of tribesmen mourned his death, Pakistan, and US officials hailed the strike as a success for their coordinated strategy to trap Al-Qaeda remnants — possibly including Osama bin Laden and Ayman al-Zawahiri — along the Afghan border.

“This is a big success in our ongoing war against terrorism,” said military spokesman, Major General Shaukat Sultan. In Kabul, Lt.Col. Tucker Mansager of the US coalition forces said, “It is our hope that his death will help disorganise the ongoing fight by foreign terrorists in the tribal areas of Pakistan and enable the Pakistan military to destroy the terrorists that remain in the area.” 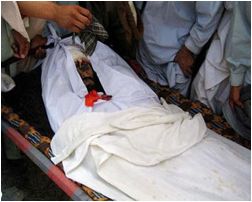 Some analysts agree that Nek Mohammad’s death will disrupt the local support network of foreign militants. “The killing of Nek Mohammad is like removing the shield of Al-Qaeda militants in the tribal region,” says Sailab Mehsud, an expert on South Waziristan. “It will demoralise and warn local militants that if their commander can be killed, so can they.”

So far, the tribal belt is quiet after Nek’s killing, but the local saying is that tribesmen become silent whenever they are angry. Nek’s deputy commanders are planning strategies for the future, while his men are stoking anti-US sentiments.

Rumours are circulating among tribesmen that an unmanned US spy plane was in the vicinity prior to the attack and may have fired the deadly shot. Tribal elders say Mohammad’s supporters are exploiting these stories to rally the tribes against Pakistan’s security forces.

“They are distributing pamphlets and seeking the help of local clerics in farflung areas to put the blame of Nek Mohammad’s death on America and to malign Pakistan’s security forces by saying they got help from the Americans to kill tribesmen,” says a tribal elder.

Nek’s killing has given Islamabad some respite, but the war is far from over. The battle in Wana is not simply between the forces and Islamic militants. It now involves affairs of a tribal nature that are difficult to handle at the best of times. Religious ideology, and a shared history of fighting against Soviets unite the militants, and promote solidarity with Al-Qaeda.

Financial incentives also play their part. Two compounds used as training camps, demolished during the operation, were sold by Dawar Khan and Eiden Khan, two tribesmen, to foreign terrorists for heavy amounts. They were presented Land Cruisers and funds for their bodyguards as well.

The supporters of foreign militants earn the respect of Islamist tribesmen who equate serving the mujahideen with serving Islam. The prevailing Pushtoon code of honour also aids the mujaihdeen as protecting one’s guests is an integral part of the code.

“It is difficult for tribesmen to throw their guests out of their homes, guests are God’s blessings. Our culture does not allow us and we are taunted for generations if we violate our traditions. The Taliban preferred to sacrifice Afghanistan rather than hand over their, guest, Osama bin Laden,” says a tribesman.

History suggests, however, that the British forces in the tribal region, as well as foreign forces in Afghanistan, exploited inter-tribal rivalries and disputes within families to persuade tribesmen to hand over their guests, often to dishonour enemies. When honour is all, dishonour is the ultimate weapon.

But setting off inter-tribal rivalries is a risky game and most Pushtoons tend to adopt a surprisingly non-violent ethos. Islamabad encouraged tribesmen to form lashkars to catch foreign and local militants, but these tribal militias returned empty-handed every time. Such tribal lashkars cannot be effective as they are threatened with dire consequences and they fear that their action may trigger off unending disputes and rivalries amongst the different tribes.

However, tribal elders and influential clerics involved in the negotiations still believe that talks can pave the way to resolve the issue.

“The military demonstrated a lack of patience in launching their operation,” says Maulvi Mairajuddin, a cleric who helped the military strike a deal with local militants. “Cannons and bombings cannot go side by side with negotiations in the tribal system. We still believe that talks can work much better than guns.”

Since the British rule, the government has largely left it to the Pushtoons in the tribal areas to rule themselves. Military operations were reserved for extraordinary circumstances. Today, Pakistan is using centuries-old British tactics to control the lawless tribesmen.

Thousands of shops in main Wana market were closed and economic sanctions were imposed as a part of the collective punishment rules of the tribal areas to exert pressure. The tribesmen promised to cooperate and requested the authorities to relax the restrictions. The authorities announced a conditional relaxation, asking the tribesmen to hand over the two wanted local militants, Maulvi Abbas and Javed Commander, close aides of Nek Mohammad.

Nek’s killing has stunned tribesmen and the liaison between ‘foreign terrorists’ and local militants has snapped. “He was the strongest link between the Al- Qaeda and local mujahideen and cannot be easily replaced,” says an educated tribesman, Mohammad Noor.

“The militants want to buy time and the authorities will not want to lose this opportunity to further weaken the nexus by using a carrot-and-stick policy against the tribesmen.”

Nek’s interim successor, Haji Mohammad Omer, is believed to be flexible, unlike the stubborn Nek Mohammad, and tribesmen believe he might be the person to talk to.

“The political process will now take place under the shadow of the guns. That may give life to a lifeless lashkar and pressure tribal elders to be more effective,” says an analyst.

“But the tribal system with its many traditions has wheels within wheels. The government needs to adopt a divide-and-rule policy to win the battle in South Waziristan. It needs to buy loyalties.”

“If someone is ready to fight for Al-Qaeda for a thousand dollars, let them gain a lot more through development and infrastructure. The battle in the tribal region cannot be won through the use of force alone. The jirga and tribal elders must be kept involved to give decisions the stamp of their approval.”