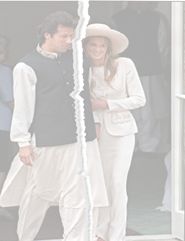 Pakistani cricket legend turned social crusader, Imran Khan, drove to the Karakoram mountains with close family friends the day after he announced his divorce from his beautiful British socialite bride, Jemima Goldsmith. These were the same mountains Khan and Goldsmith had honeymooned in nine years ago, following their fairytale-style marriage in Richmond, south-west London, in 1995.

Jemima, the daughter of billionaire British financier, Sir James Goldsmith, was 21, and Imran 42, when they married. Their union caused quite a stir in both Britain and Pakistan. The fact that Jemima converted to Islam after the wedding and changed her name to Jamila Haiqa may have placated her husband’s political opponents, but her open championship of the Palestinian cause in newspaper articles, given her Jewish heritage, raised fierce criticism amongst certain Zionist quarters.

The country’s biggest celebrity split was announced through Imran’s political party, Tehrik-e-Insaaf’s (Movement for Justice) spokesman. “I sadly announce that Jemima and I have divorced,” read Imran’s written statement. “This was a mutual decision, and is clearly very sad for both of us. My home and my future is in Pakistan. Whilst Jemima tried her best to settle here, my political life made it difficult for her to adapt to life in Pakistan.”

Most of Imran’s family members and close friends sum up the denouement of the couple’s nine-year-long relationship as “the end of a fairytale.” The divorce, however, has been amicable. “Imran and Jemima still love each other very much, and the divorce doesn’t mean they have cut off all contact,” says Yousuf Salahuddin, one of the close family friends who joined Khan on his mountaineering trip. “Imran is planning to travel to London to spend some time with his two sons, and will meet Jemima there. They are both mature and educated, and know how to separate in a civilised way.”

According to Salahuddin, Jemima spoke to him for at least two hours from London, just one day before their divorce was announced. “Jemima is very sad about the split,” he said.

According to Pakistani family law, a couple going through the process of divorce must serve a notice, along with the divorce deed, to their spouse through an Arbitration Council, or Family Court. The court then summons both parties within a 90-day period, for the purpose of attempting a reconciliation. If both parties refuse to reconcile, the divorce stands confirmed. As Jemima is not in Pakistan, however, Imran is legally permitted to serve her with divorce papers directly through an attorney or through the British High Commission in Pakistan. It is not clear yet which channel Khan has chosen to formalise his divorce.

Khan’s short press statement offered no details on who would retain custody of the couple’s two children, 5-year-old Kasim and 7-year-old Suleiman. 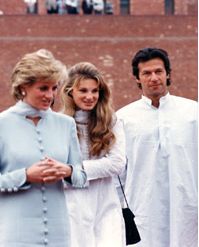 Friends of the family state that the couple have mutually settled all contentious issues, including those affecting their children. According to Salahuddin, both Suleiman and Kasim would live with Jemima and visit Imran in Pakistan during the winters. “Both children are in a sensitive age bracket and need their mothers’ care more than anything else,” he said.

According to one of Imran’s four sisters, their octogenarian father, Ikramullah Niazi, remained confined to his room all day when he heard the divorce had been finalised. “We are all very sad for our brother, but it was his own personal decision,” she said. “Jemima is such a loveable person, and nobody can criticise her. We will always miss her.”

Imran and Jemima’s fairytale, cross-cultural and inter-faith marriage was the victim of many scandals, from those involving Imran’s past relationships with other women, to accusations of Jemima smuggling valuable antiques out of the country. Jemima was also charged with being a Zionist agent by Pakistani politicians looking to discredit Imran, as well as being a student of the blasphemer author of The Satanic Verses, Salman Rushdie.

To prove her critics wrong, Jemima started work on an aid project for Afghan refugees in Jalozai, Peshawar — an initiative which landed her a job as UNICEF’s UK Special Representative in September, 2001. Her work took her to Palestine and Afghanistan last year. Other philanthropic deeds included contributing the profits of her embroidered couture line to the Shaukat Khanum Cancer Hospital, set up by Imran in memory of his mother who had died of cancer.

The couple’s high-profile marriage became the talk of the town once again when Jemima moved back to London in December last year, and enrolled for a master’s degree at the School of Oriental and African Studies (SOAS). Rumours that the couple’s relationship was on the rocks as a result of Imran’s alleged admission to the paternity of Sita White’s daughter, Tyrian Jade, were rife, compelling Jemima to place an advertisement in the newspapers in an attempt to refute claims that the couple was experiencing marital difficulties.

The latest controversy surrounding the marriage revolves around Jemima’s new relationship with Hollywood star, Hugh Grant, a British actor famous for his reputation as a ladies man, after he was recently spotted leaving a high-society club in London with a mini-skirted Jemima in tow.

Most of Imran’s family friends, however, deny that a third party was responsible for the break-up of the couple. “This is not the first time that either Imran or Jemima have been charged with having extra-marital affairs. The marriage was chock-a-block with similar scandals,” says a close friend of the former couple. “Jemima went out with Grant accompanied by, at least, three other people,” he clarified.

While British tabloids are notorious for engaging in character assassinations and mud-slinging in an attempt to boost sales, the Imran/Jemima split has seen even broadsheets stooping to sensational embellishments and racial stereotyping. Reports in The Guardian claim that the marriage caused Jemima to transform from a high-class socialite to a dowdy third-world housewife living in front of a kitchen sink. Although it is true the couple had chosen to settle in Imran’s family home in Lahore after their marriage, they moved to an upscale locality near the lush-green Margalla hills, in Islamabad, in early 2000.

Quelling claims that Jemima found it difficult to adapt to Pakistan’s culture, Salahuddin maintains, “Jemima never found it difficult to cover-up after she converted to Islam and chose to live with Imran.” Eager to fit in, Jemima took lessons in Urdu for three years and proved a talented pupil, even speaking in the local lingo while campaigning for her husband’s election in October 2002. “I said a few lines in Pashto at one of the jalsas we went to in the Frontier, but I’m not fluent at all,” a humble Jemima said in one of her interviews published last year in a local magazine.

According to Salahuddin, Jemima found it difficult to stay in Pakistan because of sensitivity to the weather. “Every time Jemima came to Pakistan, she would fall ill. She particularly suffered from amoebic dysentery. When she visited in April, she was hospitalised for three days.”

“When our own girls of Pakistani origin, raised in the west, cannot live in Pakistan, how can a white girl be expected to live here permanently?” asks Imran’s sister. “Jemima began to spend more and more time in London with her family, and has been living there permanently for the past year-and-a-half. She is very close to her family, just like our brother.”

Imran, meanwhile, contended his life, and future, were in Pakistan

Rumours of divorce circulated once again when Imran was conspicuously absent at his wife’s 30th birthday party, attended by many British celebrities, including Grant. “Imran runs a huge cancer hospital in Lahore, heads a political party, and has recently become a parliamentarian. These duties take away most of his time,” said Salahuddin.

According to his friends, Imran had discussed his marital difficulties with them a few month ago, saying he could not sail two boats. “I cannot settle in London and Jemima cannot live in Pakistan. There is no option left.”

Now divorced, the once again single-and-unwilling-to-mingle Imran is free to focus entirely on his political agenda. Plans are also underway to set-up another hospital in Karachi, and a university in Mianwali, Imran’s hometown, from where he was elected member of parliament for the first time in the October 2002 elections.

And according to the nation’s erstwhile heart-throb, “the sacrifice is worth it.”