A defiant and aggressive tenor marked Nawaz Sharif’s first public appearance since his ouster from power by a military coup more than six years ago. “It is an open war against the military government,” the former prime minister told hundreds of his excited supporters in London. It was the first time that he had been permitted to travel outside Saudi Arabia where he has been living in exile for more than five years. This has also provided him an opportunity to play a more active role in Pakistani politics.

Sharif’s arrival in London, which is already a base for another former prime minister, Benazir Bhutto, not to mention a home-in-exile for the MQM leader, Altaf Hussain, has made Britain’s capital the centre for Pakistani political wheeling and dealing. With President Musharraf’s credibility sliding and the parliamentary elections about a year away, the new dynamics is bound to cast a heavy shadow on the Pakistani political scene. Pakistan’s two most powerful political figures are already part of the ARD and the greater cooperation between them is indeed a cause of concern for the government.

Apparently the Pakistan government consented to Sharif’s travelling to London on humanitarian grounds, because of his son’s serious illness. Permission was granted following secret contacts between the Sharif family and a close associate of President Musharraf. According to sources, the Saudi government may also have played a role in the matter. However, it is not clear whether there was any precondition involved. Sharif’s tough stance and aggressive anti-Musharraf rhetoric indicates that there was no deal.

Musharraf is adamant that neither Sharif nor Benazir would be allowed to return to Pakistan and take part in the elections. “Sharif has taken advantage of our humanitarian consideration,” he asserted. But can Musharraf prevent the two leaders from influencing Pakistani politics ?

Although Sharif’s contact with his party was never completely severed during his exile in Jeddah, his stay in London is expected to give him greater access to the media and greater proximity to his supporters. Most political observers agree that he would be able to play a more effective role in Pakistani politics while sitting in London. His return to the country, however, is closely linked with Musharraf’s political fortunes.

Though in exile, Sharif has remained a powerful political figure, casting his shadow on Pakistani politics. Although a major part of his Pakistan Muslim League had deserted him soon after the coup, his own support base, particularly, in the Punjab, was never completely eroded . The growing disenchantment with the military-led government has helped him regain some lost ground. Sharif is undoubtedly the main beneficiary as the country faces multiple crises. 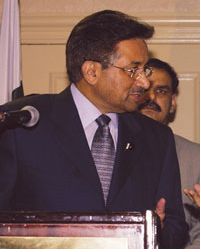 The public euphoria which had greeted the military takeover turned sour a long time ago with Musharraf failing to stop the country’s drift towards political uncertainty. He engineered a new political dispensation, co-opting the most corrupt and opportunist politicians, while his refusal to give up his military uniform has further eroded his legitimacy. The wedge among the provinces has widened even more because of an increasing centralisation of power and the expanding control of the military. The Kalabagh Dam issue exposed the increasing divide, while the military operation in Balochistan further exacerbated the situation. The army is now over-stretched and simultaneously engaged on several fronts.

The military is now completely bogged down in Waziristan where it is confronting Al-Qaeda backed tribal militants. Hundreds of soldiers have been killed in the bloody war that has produced little results. The rugged tribal region is now virtually controlled by the local Taliban and most of the militant leaders are back, freely recruiting volunteers.

The recent CIA air strike on Damadola in Bajaur agency that killed more than one dozen women and children has further fuelled the national anger against Musharraf’s policies, while the official reaction to the US incursion has created more confusion and bitterness. The government initially tried to play down the incident, saying the presence of foreign militants had provoked the US attack, only to change their stance because of public outrage. Almost a week later, Musharraf denounced the attack, conceding that the action had violated Pakistan’s sovereignty. Contradictory statements further added to the confusion. While, Prime Minister Shaukat Aziz, during his visit to the United States, firmly denied there was any foreign militant present in Bajaur, Musharraf claimed several Al-Qaeda suspects were killed in the raid.

Sharif has tried to exploit the public outrage on the issue, accusing Musharraf of surrendering national sovereignty. It was a calculated statement when he said the military leader has “disgraced the nation.” The former prime minister alleged that he was sent into exile at gunpoint. The accusation, however, is far from the truth and continues to haunt him as he tries to mobilise support. His other problem is lack of a strong party structure to fight his political battle in the country. Sharif is not prepared to accept his responsibility in derailing the democratic process. During his rule he accumulated all powers: he undermined the parliament and wanted to become “Amirul Mominin,” he suppressed the freedom of the press and jailed journalists. His actions paved the way for the military takeover, but there is little indication that Sharif has learnt any lessons from the past. 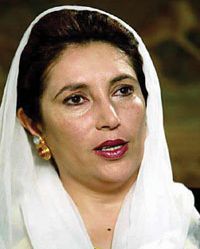 Though both the former prime ministers in exile have promised to join hands in the struggle for democracy, there is no clear line of action. The inherent suspicion between them widened further as both tried to strike a deal with the military. For several years, the military leadership gave the impression that they were prepared to deal with Benazir. However, the talks failed after Musharraf refused to withdraw the corruption cases against her. The government, in a bid to turn the screws on the PPP, has recently issued “red warrants” against both Benazir Bhutto and Asif Ali Zardari.

The military’s greatest nightmare is that the MQM may join hands with the two major opposition parties. Over the last few months Altaf Hussain has played tough. The MQM, whose support is crucial for the survival of the central and Sindh governments, lately parted ways with Musharraf on key issues. It joined hands with the opposition on the Kalabagh Dam issue and opposed the military action in Balochistan. It held joint rallies with the Jamaat-i-Islami to protest against the US air strike in Bajaur. The seriousness of the rift was all the more apparent when Tariq Aziz rushed to London to hold talks with Altaf Hussain last month. However, in an unpredictable about-turn, Altaf Hussain, after a telephonic conversation with Musharraf, retreated from his threat to quit the government.

All is not all well for Musharraf with the parliamentary elections coming up next year. The PML (Q) is in disarray and cannot fight his battle. Most observers agree that the party will disintegrate at the mere hint of Sharif’s return. Musharraf continues to rely on the support of the army and an uncertain coalition to survive in power. How long this situation can last in the current fast changing political environment is anybody’s guess.