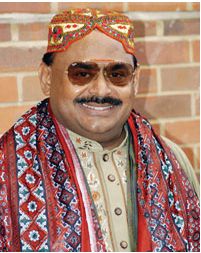 The Muttahida Qaumi Movement (MQM), the most powerful coalition partner in President Pervez Musharraf’s political set-up, has once again decided to stay, rather than quit the government, despite much publicised threats to the contrary. It had threatened to quit to protest against the government’s decision to build the Kalabagh Dam, and the launching of the military operation in Balochistan.

While MQM opponents termed the “threat,” as nothing but sheer drama, the MQM maintains that it changed its position because it had achieved its demands. Many party workers are, however, disturbed by some of the decisions taken by the party leadership over the last two months and believe there could be political setbacks for the MQM well before the scheduled general elections.

Some of the MQM’s ruling coalition partners and their ministers opposed its stance, particularly in the Punjab. Federal Minister for Information, Sheikh Rasheed Ahmed, and Minister for Parliamentary Affairs, Sher Afghan, led the attack on MQM policies on issues like the Kalabagh Dam. It appears that PML (Q) leaders are taking advantage of the MQM’s current political dilemma.

Observers believe that the MQM has not only lost the trust of friends within the government, but also among some of the nationalist parties, particularly in Balochistan and the Frontier. There is tension between the MQM and Nawab Akbar Bugti’s Jamhoori Watan Party, (JWP), which in the past had praised the MQM’s stance on Balochistan. Even within the party, there are signs of dissent on some decisions taken by the party leadership: “It is time that the party learns the art of remaining in the government,” says an MQM leader. “If we are in the government, we are in and have to accept their policies, or quit.” 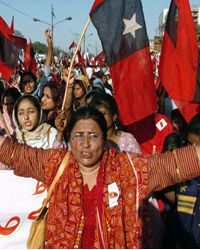 The MQM’s decision to postpone its fact finding mission to Dera Bugti came after Nawab Akbar Bugti refused to cooperate with the delegation, apparently expressing his displeasure over the way the MQM had addressed the situation. “The decision to postpone the visit was taken after Bugti’s spokesman, Agha Shahid Bugti, refused to provide security and advised us not to visit,” said MQM chief, Altaf Hussain, in a late night statement on January 23, just a few hours before the 70-member delegation was to leave for Kashmore.

Prior to this decision, Altaf Hussain had a good relationship with Akbar Bugti, particularly after the alleged cooperation Bugti gave to the MQM during the 1992 operation, maintain informed sources.

Apparently, Nawab Bugti was not pleased with MQM policies after Altaf Hussain withdrew his decision to quit the government over the operation in Balochistan and the Kalabagh Dam issue. “It appeared that the MQM was playing Musharraf’s game since the ultimatum was withdrawn merely on the assurance that there would be no operation against the Balochi people,” said a leader of Bugti’s JWP. “We had appreciated the earlier stand taken by the MQM, but had noticed a change in their approach after a telephonic conversation between Altaf Hussain and Musharraf, after the former threatened to quit the government. Why did they want to send a fact-finding mission after first giving the ultimatum and then withdrawing it? This created doubts about their role,” he said.

Currently, the MQM wields unprecedented power in the Sindh government. Never before in Sindh’s history has any governor enjoyed as much power as Dr Ishratul Ibad. However, despite their close links with the government, the MQM faces constant problems with Chief Minister Arbab Ghulam Rahim. Rahim’s biggest problem has been his failure to “sign files,” which are allegedly pending in the hundreds and not only MQM ministers, but his own colleagues within the PML are upset.

Rahim managed to survive after the MQM’s patch-up with Musharraf, who wants the present set-up to continue unless things deteriorate drastically. Rahim, after returning from Haj, was allegedly told by Governor Ibad that he must take his work seriously, as the MQM is running out of patience.

There is no doubt that the MQM is now a mainstream political party: the third largest in the country, the second largest in Sindh and single largest in Karachi.

However, it will have to press for a policy shift in the Centre on Balochistan, Sindh and the NWFP to maintain support from the nationalist parties.