Khan Abdul Wali Khan, who died on 27 January 2006 at the age of 89, was the best known freedom-fighter in Pakistan who was obliged to continue fighting for his people’s rights for more than half a century even after their independence had been proclaimed. The story of this struggle offers valuable insight into the tribulations of the Pakistani people and the factors contributing to it.

The second son of Khan Abdul Ghaffar Khan, the undisputed organiser of the Pakhtun people’s socio-political awakening, Wali Khan grew up in one of the most momentous periods in the sub-continent’s history. The first two decades of his life witnessed the agitation against the Rowlatt Acts, the Jallianwala massacre, the Khilafat agitation, the development of the Gandhian strategy of peaceful political struggle, the heroism of the revolutionary youth (dubbed terrorists by their oppressors), the rise of the Red Shirts as a political force and their slaughter in Qissa Khwani bazaar, and the preparation of the final British constitutional plan (Act of 1935) for pre-1947 India. These developments defined the conscious youths’ role in terms of an unswerving commitment to the goal of national freedom and their resolve to offer whatever sacrifices the cause demanded. Wali Khan’s greatest achievement was that once he had accepted this role he never gave it up. Some observers even think sacrifice for one’s cause became an end in itself with him.

He was prominent among the nationalist politicians who spent the first few years of their country’s independence in prison, largely because while the state had chosen to move further away from its foundational charter, they firmly believed its promise to the provinces of self-governing status was non-negotiable. For this ‘crime,’ Wali Khan had to return to prison again and again, and his fellow party workers had to face not only a ban on their organisation more than once, but also an aerial attack on their assembly that left hundreds dead. That he had to fight for what are generally and not quite correctly described as provincial rights not only cast Wali Khan’s political career in the mould of a tragedy, it also constitutes the core plot of the Pakistani people’s tragedy in that they have not been able to settle a matter that could have been resolved in a few years, if not a few months.

The long period of imprisonment, denial of any political space to the Khudai Khidmatgars, and the dismissal of Dr. Khan Sahib’s ministry introduced in Wali Khan’s thinking a streak of bitterness that turned into rancour whenever he faced a fresh round of state hostility. Among other things, this affected his vision. 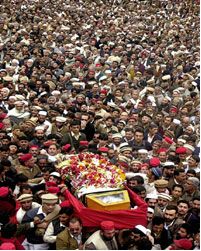 However, the democratic struggle against one unit, which subsequently merged into a broader struggle against Ayub Khan’s rule, provided Wali Khan with opportunities for playing a large role in national politics. He not only campaigned vigorously in support of Miss Fatima Jinnah in the presidential election, but also persisted in campaigning for restoration of democracy, in spite of frustration at the attitude of a strong section of the party. The same commitment to democratic ideals enabled him to oppose military operations in East Bengal.

The ’70s proved to be a difficult period for Wali Khan. The setback to progressive forces caused by the separation of East Bengal affected Wali Khan. Under an understanding with Zulfikar Ali Bhutto, the National Awami Party was allowed to share power in Frontier and Balochistan, and Wali Khan made an extraordinarily significant contribution to the finalisation of the 1973 Constitution. It is no secret that the adoption of the parliamentary form of government and a somewhat better deal for the federating units was due to the pressure of the opposition under the leadership of Wali Khan. During the second half of the ’70s, the conflict with the Bhutto government and the latter’s decision to launch the trial of NAP leaders at Hyderabad drove him away from his democratic path and the country paid dearly for his approval of Zia-ul-Haq’s anti-democratic expedition. These years also marked the completion of his withdrawal from the national scene, particularly after a criminal attack on his party’s public meeting in Rawalpindi.

It is too early to make an objective assessment of Khan. Abdul Wali Khan’s place in Pakistan’s political history. One of the reasons is the fierce controversy his political creed generated, not only among the custodians of power, but also among the new beneficiaries of state policies and patronage. In any event it will be impossible to deny Wali Khan’s large contribution to whatever little democratic traditions Pakistan can lay claim to. He did not run after office and chose to withdraw from active politics when voters from his traditional constituency did not repose confidence in him. He was a man of public meetings, and when the process of tabooing political activity began he was deprived of the environment in which he could work. Still, the determination with which he remained committed to democratic politics, federalism and standards of integrity will constitute one of the brighter chapters in the country’s history.