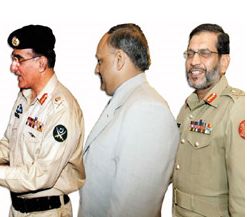 Pakistan green seems to have been replaced by khaki. Certainly, khaki is omnipresent in organisations across the country. In General Pervez Musharraf’s five-year tenure, hundreds of serving and retired officers of the Pakistan army have been given government and semi-government jobs, which should rightfully have gone to members of the civilian sector, ostensibly to ‘improve’ the performance of the institutions in which they have been inducted, and to eradicate corruption. Not surprisingly, the government has failed miserably on both counts: neither has the performance of these departments improved, nor does corruption indicate any downward trend. In fact, in some cases, the performance of departments under military personnel has deteriorated drastically.

According to a list obtained by Newsline, between 800 to 900 retired and serving officials from the armed forces have been inducted at senior levels in federal, provincial, government and semi-government departments, instead of officials from the civilian bureaucracy. Most of these officials were appointed after Musharraf took over in 1999, and they continue to serve in the now ‘civilian set-up’ of former City Banker and current Pakistani Prime Minister, Shaukat Aziz. “We always had officials from the armed forces working in the civilian set-up, but the number of officials inducted in the civilian sector in the last couple of years is unprecedented,” says an official. According to him, given the numbers and the manner in which armed services personnel are being placed in positions that rightfully should be filled by civilians, it appears that “Pakistan today is not a country with an army, but an army with a country.”

Furthermore, many of the officers brought in do not even have the basic qualifications for the posts they have been given. For example, some of them have been appointed to the women’s division while others are serving in the minorities division. “How does a macho man from the army, who has been indoctrinated from day one against ‘Hindu India’ qualify for a position in either the minorities division or the women’s division?” asks an employee in one of these organisations. Or for that matter, one may well ask, in the printing corporation, the utility stores department or the education sector. At least four of the universities in the country — including the Punjab University, the Engineering University, Lahore, the University of Engineering Technology, Peshawar, and the prestigious Quaid-e-Azam University, Islamabad — are currently being headed by officials from the Pakistan army.

Conversely, in some instances, the appointments of armed forces personnel seem akin to demotions. The recent appointment of former Chief of Army Staff, General Jahangir Karamat, as Pakistani ambassador to Washington DC is one such case. “Can you imagine a man who was once more powerful than the Prime Minister will now technically be working under the foreign secretary,” says an observer.

“Those at the helm seem to think the ability to speak English is a major criterion in qualifying for a job,” says an official at one of the institutions which seems to have been overrun by armed forces personnel. “They simply cannot understand that some of the jobs they have filled with their chosen appointees are highly technical and require corresponding expertise. Unlike the forces, not all positions are of an administrative nature where all one needs is the ability to issue marching orders to a junior.”

The official quotes the example of the Karachi Port Trust (KPT), which faced one of its worst crises ever when a ship carrying 65,000 tonnes of crude oil ran aground just outside the Karachi harbour on July 27, 2003, after languishing in shallow waters for 18 days, with the KPT authorities looking on. A massive rupture that developed in the vessel, disgorged nearly 30,000 tonnes of its cargo into the open sea, and as the oil washed on to Karachi’s best-known beach and further along the shore, much of the area’s marine life was destroyed, and residents of the vicinity who were exposed to the toxic fumes that emanated from the spill developed assorted skin and lung ailments. Interestingly, most senior management positions in the KPT today are filled by armed forces personnel who were brought in after General Musharraf took over in October 1999. They include Rear Admiral Ahmed Hayat as chairman, KPT and several other army and navy officers serving as general managers.

Since armed forces officials have taken over control of KPT affairs, they have made various structural changes in the organisation and are now handling assorted technical assignments. For example, traditionally, the deputy conservator — usually an individual with years of hands-on experience at the job — supervises the timing of the berthing of vessels. However, at the time of the disaster, this assignment was handed over to the general manager (operations) who is an official of the Pakistan navy and has no experience at this particular job. Similarly, an aviator of the Pakistan navy was appointed traffic manager of the KPT — another highly technical position he is hardly qualified to fill. In addition to this, there is reliable information to suggest corruption in KPT ranks, and most of the beneficiaries are allegedly former armed forces personnel. As a result of the lateral entries to the KPT and the reports of corruption, several senior officials have opted for the ‘golden handshake’ and bid the organisation farewell, contributing to its decline.

Apart from the KPT, according to a list obtained by Newsline, officials of the Pakistan armed forces today are working in nearly 63 government departments in in Grade 18 posts and above. For example, the cabinet division is headed by Major General (Retd) Shahzada Alam Malik in BPS (Basic Pay Scale)-22. Additionally, at least 14 other armed forces officials are also working in senior positions at the cabinet division, in directorial posts.

Likewise, nearly one dozen officials from the army are serving in different positions of the communications division, from the chairman of the Port Qasim Authority, to the director generals, and managers. Another case in point is the railways division where nearly 40 officials from the armed forces have been inducted in various capacities. These include the secretary, Railways and Railways Board, a general manager, a director, the chief personnel officer, a chief manager, and a divisional superintendent, along with hosts of others placed in strategically important and potentially lucrative positions.

Nearly 50 officers from the armed forces are also serving in various capacities in the Civil Aviation Authority. These include the posts of CAA chairman, directors of various departments, general managers and other senior posts.

In addition to the inflated salaries, there is the matter of corruption. “When you examine the figures for corruption by armed forces personnel you discover the latter are no better than officials from the civilian cadres,” says a civilian official of one of the heavily military-manned organisations. He adds, “The only difference between the two is the fact that corruption by civilians is exposed and made public, but corruption involving members of the armed forces is kept under wraps.”

The workings of the National Accountability Bureau (NAB) certainly lead credence to this fact. Since it was established in 1999, NAB has taken up cases of corruption against dozens of civilians, both in the public and private sector, but barring one high-profile case — that of Admiral Mansurul Haque — barely laid a finger on any member of the armed forces, serving or retired. If any action has been taken against any officers, it has been done in secrecy.

Nonetheless, various inquires reportedly carried out by NAB indicate that the national exchequer may have lost up to one billion USD in the shape of alleged kickbacks in international defence-equipment deals signed by the Army Welfare Trust, Shaheen and Bahria foundations related to tanks, submarines, mine hunters, Mirage fighters and army jeeps.

Inside sources disclose that NAB is in possession of some solid documentary, and substantial circumstantial evidence which would, if it was so inclined, enable it to launch a full-scale probe against nearly two dozen retired senior military officials, including three former chiefs of army staff, two naval chiefs and an air force chief, for their role in the purchases of tanks, submarines, naval mine hunters, Mirage fighters and army jeeps. But, there is nothing to suggest that NAB is close to filing any references against any former serving military official.

However, while the presence of armed forces personnel in the public sector is perhaps unprecedented in terms of size, it is not time the first this has happened.

The Report of the Commission of Inquiry — 1971 War, as declassified by the Government of Pakistan, was released recently. It quotes several respectable witnesses drawn from various sections of society, saying how a large number of senior army officers, particularly those occupying the highest positions, had not only lost the will to fight but also the professional competence necessary for taking the vital and critical decisions demanded of them for the successful prosecution of war because they had involved themselves in matters out of their purview.

Addressing the issue of the army’s meddling in civilian affairs, the report says that the evidence before the commission shows that the process of moral degeneration among the senior ranks of the armed forces was set in motion by their involvement in martial law duties in 1958. The report maintains that army officers were exposed to the temptations inherent in direct contact with various sectors of civilian life and administration and many of them ended up by not only becoming arrogant, but also corrupt.

The report concludes that its purpose is to draw attention to the admittedly corrupting influences generated by the involvement of the armed forces in the civil administration of the country and that such involvement seriously detracted from the professional duties of the army.

It would serve our armed forces well to study the report and learn from history.