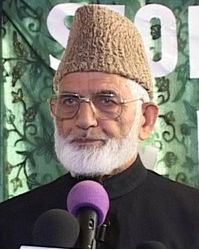 Q: Do you think that the India-Pakistan dialogue will have a positive impact on the Kashmir issue?

A: So far the talks between India and Pakistan have had no impact on Jammu and Kashmir. Indian forces are still present in Jammu and Kashmir and they continue to suppress the freedom struggle. Killings, arrests and violence against the civilian population is rampant. In fact, this dialogue has encouraged India, because in the past Pakistan had raised the issue of human rights violations [in Occupied Kashmir], but not any more. The Pakistani media and government have changed their polices because they think that pointing out violations will undermine the peace process.

Q: What is your major complaint against Pakistan’s policy?

A: Pakistan wants to have good relations with India, but they are not displaying any emotion for the Kashmir issue or showing any seriousness towards it. This attitude disappoints the people of Jammu and Kashmir.

Q: President General Pervez Musharraf says that Pakistan has not compromised any principles in relation to Kashmir; only the strategy has changed…

A: Principles are mirrored through strategy and strategies have to match principles. [You say] you have sympathy with the people of Jammu and Kashmir, you support their right of self-determination, you support them morally, politically and diplomatically — this is your principle. But your strategy is to shake hands with the people who play with our lives, rape our daughters, arrest our people, kill them and discard their bodies in police stations. You show cordiality with those who have detained 10,000 Kashmiris and we do not know whether they are dead or alive. And President Musharraf says that Manmohan Singh is a nice person…

These all are fantasies and dreams. There is no change in India’s policy on Kashmir. They are cheating Pakistan. Indians have adopted this policy for the past 57 years. In 1995 they passed a resolution in both houses of parliament stating that Jammu and Kashmir is an integral part of India. Whether it’s the ruling party or the opposition, unless and until they roll back this resolution, how can they accept Jammu and Kashmir as disputed territory?

Q: War is not a solution to this problem. Don’t you think that the issue can be resolved through dialogue?

A: Your question is very important. It is true that India and Pakistan have fought three wars where the main cause was Kashmir and the main cause for the separation of East Pakistan was also Kashmir. We understand that wars create problems, but it does not mean that Pakistan should move away from its principled stand on Kashmir. Pakistan has to stand firm on the Kashmiri people’s rights of self-determination and not show any flexibility on this position.

I have said many times that we will accept the result of a plebiscite, but India has to accept the results as well. Pakistan should not be reluctant to say that Hindustan was divided on the basis of the two-nation theory. Although India does not admit this fact, it is crystal clear that Pakistan came into being based upon this theory. Pakistan seems to be under pressure and its policies are becoming fragile. We do not say that we should indulge in war; what we say is that Pakistan should be steadfast.

Q: Is there any decrease in cross-border infiltration from Pakistan?

A: Nobody supports terrorism. But this does not mean that a justified right should be curbed in the name of countering terrorism. Hindustan’s political leaders themselves used force against the British empire. Bhagat Singh sacrified his life on the gallows. On April 14, 2000, after my release from an Indian jail, some media personnel asked me what justification there was for infiltration. I responded, ‘Why did India send its troops to East Pakistan to support the movement there?’ The questioners were rendered speechless.

Q: Some people blame you for dividing the APHC. Why did you force the split?

A: Briefly, in 2002 while we were in jail, the APHC did not follow the constitution of the Hurriyat Conference. They caused a great setback to the movement for independence and it was agreed that no other such opportunity would be afforded to them.