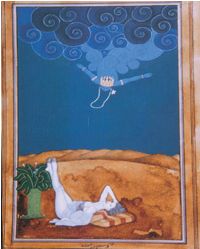 Wasim Ahmed’s solo exhibition of contemporary miniatures at Chawkandi Art was a cheeky blend of pop, fantasy and underground art in a vibrant palette of strong earthy hues.

Formerly an offshoot of the classical miniature, the modern version has now taken root and begun to sprout on its own. Most of the exponents of this new wave still exhibit in groups but some are evolving signature styles and are beginning to carve their own niche. Wasim Ahmed is among the select few whose works bear easy recognition. His name is synonymous with the delightful ‘Krishna Series.’

A dicey mix of the absurd and the real, Wasim’s Krishna miniatures can be approached from various angles. He presents cameos of a flirtatious Krishna courting nubile femme fatales. By pitching two foreign cultures in a provocative exchange, Krishna, an icon of Hindu mythology, against (pop diva) Madonna-inspired material girls, he spices up the dialogue between tradition and modernity. These amorous dalliances can also be seen as dream imagery, young men’s fantasies relived through pieces of miniature art. And then there is the humorous banter underlying all the narratives, which really perks up the viewing experience. Another ongoing theme in Wasim’s oeuvre is the ‘Burqa Series,’ personified by nudes trapped in diaphanous veils. In this exhibition, he displays a painting of a burly woman wrestling her way through a flimsy veil.

Semi-abstract landscapes in a miniature format have been appearing in Wasim’s exhibitions for some time now. He continues with these experiments in this show as well and now, in comparison, there is a marked improvement in his compositions. His imagery has become much more imaginative and in paintings like Golden Oasis and Macro to Micro, his division of space, layout of patterns and colour pitch is quite dramatic.

Wasim’s painterly traits employed in these individual series have come into full play in a new body of work titled ‘Male Desires.’ This consists of figurative, semi-abstract fantasy art with a fresh array of striking symbols and elusive references. These miniature dreamscapes voicing hidden whims and fantasies are taking Wasim’s art in a new direction which one hopes he will lead towards some logical end.

Wasim Ahmed has an inherent bent for abstraction and is skilled in the classic miniature vocabulary. In these new works, he is innovating with the help of these miniature alphabets and contemporary symbols. Particularly interesting is the reinvention of such miniature staples as clouds, wavelike water marks, lotus flowers and tea-stained marbleized effects on paper. A fiery colour palette of flaming orange, red, yellow and a very deep and subtle blue is another combination that is working well with this artist.

In still another collection of paintings called ‘Slow Death,’ Wasim has tried to show life fading away. Images of the heart, lungs and other vital organs and life support attachments spell the trauma of transition. The series is weakly rendered in quivering lines and patchy colouration.

This exhibition charts the artist’s growth vis-a-vis concepts, technique and presentation strategies; a certain maturity is visible in his handling of all aspects of producing art and his considerable workmanship is still in good form.