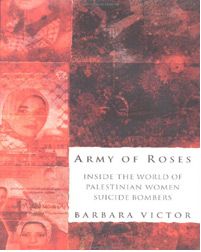 Let me make it clear from the start: Army of Roses is a book of dubious analysis and bias, and very clearly lies within the now very prolific genre of post-9/11 books by so-called Middle-East/terrorism experts. The fact that the author, Barbara Victor, cites from her interviews with Sheikh Yassin and Abdul Aziz Rantisi, both recent victims of Israeli assassinations, does not mean it is unbiased. In fact, she makes the Palestinians appear somehow synonymous with Hamas, the Al-Aqsa Martyrs Brigade and other such ‘terrorist’ organisations who will not refrain from stooping so low as to use women. The name of the book is taken from Yasser Arafat’s reference in 2002 to the women in the struggle for independence, as his “army of roses who will crush Israeli tanks.” Later that same day, Wafa Idris became the first female suicide-bomber of the intifada.

So while Barbara Victor talks of women not being able to withstand the pressure from their own society and offers a simplistic analysis of ‘what makes a suicide-bomber,’ there is conspicuous silence on the overwhelming role of the unjust Israeli occupation. Not only is the possibility that the atrocities of the Israeli occupation might have contributed to the rise of suicide-bombers completely ignored, but, according to Victor’s reckoning, there are apparently no ordinary people in Palestine who struggle to make a living and live peacefully in the shadow of Israeli tanks. The author plays her role in reinforcing the dangerous stereotype created by the ‘free media.’

Everyone who believes in freedom and the right to fight for it, admits that first it was the ‘children of stone’ and now the ‘army of roses’ who are powerful modern symbols of the Palestinian quest for regaining the land taken away from them. But the author gives the acts of defiance by Palestinian women against a powerful and brutal occupying force, a pseudofeminist perspective — that of men exploiting women.

Victor presents the intimate personal histories of the first five female bombers who succeeded, and of some who failed. At times the stories want to make you weep, and at other times they fill you with anger. According to the author, Palestinian women are merely puppets of their male handlers. The implication is that men make suicide-bombers in the name of Islam; they are responsible for transforming women, the bearers of life, into killing machines. The female suicide-bombers are shown as having personal problems or ‘mental instabilities’ as a result of sterility or illegitimate pregnancy. ” If we take Wafa Idris,” explains Dr Tzoreff, [of the Ben Gurion University, no less!], ” the ultimate shaheeda, who is she after all? She is a talented young woman, married and divorced because she was sterile, desperate because she knew perfectly well there was no future for her in any aspect of the Palestinian society…” Victor has obviously not heard of the first suicide-bomber against the Israeli forces, Loula Abboud, who was a 19-year-old Christian Lebanese girl, commanding a small resistance cell in southern Lebanon against the Israeli occupiers. Loula was a beautiful, popular and well-educated middle-class girl, apparently without any social or emotional problems. When she blew herself up in front of a group of Israeli soldiers in 1985, she became a role model for Palestinian, Chechen, Tamil and Kurdish suicide-bombers. In the Tamil and Kurdish movements, women are responsible for more than a third of the suicide attacks, including the one that killed the Indian premier, Rajiv Gandhi.

Of course, it is a tragedy when children have to come out with stones to confront tanks and sophisticated weapons, which the Israelis use against the Palestinians on a daily basis. Of course we weep at the idea of human beings turning themselves into bombs against the fourth largest army in the world. Is the author going to condemn the Palestinians for ‘using’ children? Moreover, can women remain passive spectators in a conflict situation where even children are drawn in? To try to prove that the women agreed because of some deep problems in their personal lives is to belittle their sacrifice. Besides, all those who join any fighting force do so with the knowledge that they might die in the battlefield. Is it kosher for Israeli women soldiers to daily harass and kill Palestinians? Where is the author’s indignation at that? Also, don’t the women who join the Israeli army have any family problems? All women and men do at some point in their lives. What drives them over the edge are circumstances in which there is no hope — and the Israelis have created such circumstances in the West Bank and Gaza. Suicide attacks have become the ultimate ‘smart bomb’ of the poor living in these areas. They are regarded as efficient and there is no fear of the perpetrator being caught and interrogated.

War in the twenty-first century is either so sophisticated and high-tech that it becomes almost banal, or it is so crude and primitive as to be almost unbelievable. The tragedy therefore lies not in the west’s inability to define terrorism or guerilla warfare or even in the morality or justification of war itself, but rather in its failure to rid the world of injustices perpetrated by the so-called democracies. Where the author implicitly condemns Hamas and others for using God as their symbol, she lets the Israeli leadership off the hook because they kill and maim in the name of a homeland for the Jews. Who is to judge what is more justified and honourable? If focusing on military targets [according to the Geneva Conventions all settlers in occupied land are combatants] makes suicide-bombers evil, then a regular army that kills civilians is equally evil. How about the daisy-cutters, the MOABs, the smart bombs and depleted uranium — are these less atrocious because these are used almost exclusively by Israelis on Palestinians and now by the coalition forces in Iraq and Afghanistan?

The author’s apparent agony over the young suicide-bombers, Wafa Idrees, Darine Abu Aisha, Ayat Al-Akhras and Andaleep Suleiman, who lost their lives in pursuit of their mission, rings false when weighed against her total silence on the stockpiles of sophisticated weapons developed in the military industrial complex of the US and sent without any preconditions to Israel. Do these not kill women in far greater numbers than the suicide bombers do?

There is a crucial connection between the first intifada and the current wave of martyrdom within the Palestinian society. The children who threw stones and Molotov cocktails and confronted Israeli soldiers in 1987, and who watched their fathers and other male relatives being beaten and humiliated by Israeli forces, are the young men and women who are the martyrs of today. This fact escapes Victor when she recounts the lives of these beautiful young women who make the ultimate sacrifice for their homeland.

The author’s political agenda is apparent throughout the book. She condemns Yasser Arafat at every turn of the page, whilst absolving the Israeli leaders just because they do not use suicide-bombers. When she supports Abu Mazen as the Prime Minister, she forgets that it was not the Palestinians who made him a leader but the American- Israeli combine who want to desperately sideline Arafat, the chosen leader of the people. According to Victor, it’s all his fault. The horrendous conditions in which the Palestinians live is all the result of his inabilities to negotiate a Palestinian state on the square centimeter of Holy Land the Israelis are prepared to relinquish. Unfortunately, Victor’s analysis has got nothing to do with the hell-hole into which Israel has pushed the Palestinian economy and society.