“Human rights violations are at their lowest in Srinagar” 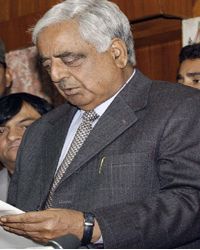 Q: Do you think that the current dialogue between India and Pakistan will prove to be fruitful?

A: This dialogue reflects the ground realities of both countries. For the past 56 years people of both countries have constantly suffered due to increased confrontations. Various efforts have been made [to improve the situation], for example, during Nawaz Sharif’s time, and then there was Atal Bihari Vajpayee’s bus trip. Then Kargil happened, followed by the Agra summit during Musharraf’s government. I think the leadership on both sides has exhausted all options and has realised the need to establish an atmosphere of friendship, which people on both sides wish to encourage. I am supportive of this process.

Q: Prime Minister Manmohan Singh has stated that India recognises Kashmir as an issue that needs to be addressed along with other issues. Are you satisfied with that statement?

A: You will be surprised to learn that in 2002, when our party did not win a majority, we sat with Congress and drafted the common minimum programme. The first sentence of the programme was that the government of India would initiate an unconditional dialogue with the people of Jammu and Kashmir. I think Congress is committed to resolving this issue. I am optimistic that it will go forward because there is no question of turning back. I’m not saying that a single round of discussions will resolve the issue. It is going to be a time-consuming process.

Q: Doesn’t Manmohan Singh’s statement implicitly acknowledge that the state you are chief minister of is disputed territory?

A: That is not the case. I don’t see it like that. This government’s mandate is to find a solution for this problem, which can only come through dialogue [between the two countries]. There is no other way. We are trying to tell our people that violence is not the solution and to give peace a chance. The people of India want the militancy to be dealt with. I have met the Prime Minister of India and he is very keen on finding a solution.

Q: There is an overriding concern in Srinagar and other areas about the rising instances of custodial killings. Your government had promised ‘dialogue, jobs for every resident, and a healing touch for all.’ What happened to the healing touch?

A: These allegations are not true. The people of Srinagar live with a sense of security. If you interact with people, you will see that nobody is afraid or worried. Earlier, no one dared to leave their house after 7:00 p.m. However, now we have posted security forces and are holding the army accountable for security mishaps. Everything has become functional. The education system is flourishing, tourism has risen, developmental activities are in the process. While there may be exceptions, the number of custodial killings is exaggerated.

Q: There is reliable information to suggest that thousands have died…

A: No, not thousands. These are exaggerated numbers. Casualties can be counted on the fingertips. There have been about 27 custodial killings during our period, and wherever they occur, we take action.

Q: You speak of a sense of security having returned, yet we see troops all over the city. It is like one large barrack…

A: No not at all. In Srinagar there are just paramilitary forces, not army troops. This is misinformation. Human rights violations are at their lowest here and we have made army and security forces accountable for any violence between civilians and armed forces. Whenever there is excessive violence, people come out on the roads to protest. I’ll give you statistics: in our period [of governance] there have been only 27 or 28 cases of custodial killings.

Q: The European Union’s Foreign Relations Committee report states that 1,000 custodial deaths have occurred in the last year, half of which were at the hands of security forces.

A: You know mishaps can take place. Many are happening in your country as well. Aren’t you dealing with an insurgency in Wana?

Q: Wana is not a disputed area.

A: When you encounter militants there is bound to be collateral damage. Last year there was an attack in front of my house. The police waited for about 25 to 26 hours before taking any action because girls (students) were present in the computer training school nearby. They waited until the girls were safe.

Q: But why kill civilians?

A: No civilians were killed.

Q: We have names and addresses of civilians who were killed.

A: That must have occurred before our arrival. There’s no doubt that in the past many civilian houses were bombed. But we do not order attacks unless civilians are cleared from the area. There is no collateral damage and that is the reason our government is successful.

Q: Why are you and Delhi refusing to engage with the Geelani faction of the APHC?

A:Dialogue is the only way, all other options have been exhausted. The insurgency has lasted for the past 50 years and several lives have been lost. Infrastructure, like schools and bridges, have been ruined. Now that the government of India is offering unconditional dialogue, you have to grab the opportunity. One day everybody, not only the Hurriyat factions, but others also, will come together because circumstances will lead them to it.

Q: Be it Yasin Malik, Ansari, Geelani or Shabir Shah, their single condition for holding talks with you is that you stop killing their people.

A: They are mistaken. I am telling you that no such violence has occurred, and we have created a healthy atmosphere for dialogue.

Q: Omar Abdullah, the opposition leader, says that your ‘healing touch’ is a hollow slogan and that human rights violations have risen. How would you respond?

A: While I understand that the opposition’s job is to oppose, expose and depose, they should not make such fake claims. We have repealed Pota and disbanded the Special Operations Group. We conduct proper investigations of all reported incidents and then the cases are taken to court.

Q: Do you think there is a possibility that you are not looking at the real facts and are cut off from reality?

A: Absolutely not. I consider the ground reality. We did as much as we could to curtail human rights violations. There was an incident of custodial death in our neighborhood, where we took immediate action and dismissed the culprit on the spot.

Q: But isn’t it true that you have no real power and that Delhi rules the roost?

A: These are just rumours. I do not care about such rumours. Unless you win the public’s trust and their hearts, you will not have power. If people don’t support you, then you cannot claim authority over them.

Q: A part of your election agenda was to negotiate with the militants. Is that in process?

A: We are trying to make them understand our position. The Hurriyat factions are also making efforts. There were several efforts before as well. For example, earlier, the home secretary of India had come here to negotiate a ceasefire with the militants. It’s an ongoing process.