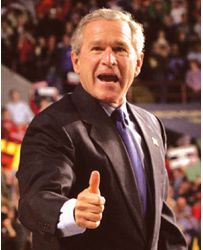 “The Center for Disease Control has issued a warning about a new virulent strain of sexually transmitted disease called Gonorrhea lecthim (pronounced ‘gonna re-elect him’),” reads the recent risquÃ© joke about the American Presidential election. “The disease is contracted through dangerous and high-risk behavior. Many victims have contracted it after having been shafted by the Bush-Cheney-Rove-Ashcroft administration for the past four years and failing to have taken adequate measures to protect themselves. Cognitive indications of individuals infected with Gonorrhea lecthim include: Antisocial personality disorder traits; delusions of grandeur with a messianic flavor; xenophobia; inability to incorporate new information; inability to accept responsibility for actions; and a strong propensity for categorical, all-or-nothing thinking.”

Alas for Michael Moore. Footage of Bushisms and My Pet Goat didn’t quite manage to send the majority of Americans into the outstretched arms of Senator J F Kerry. Forget the ballooning US budget deficit, (inherited in surplus in 2000), the flailing economy, rising unemployment, low job creation statistics, soaring oil prices, the stock market crash, strained US-international relations, the Iraq imbroglio, 1008 troop deaths (and counting), rising global instability or even the greater insecurity experienced by Americans in the world outside its boundaries. What the Presidential election 2004 boiled down to, in a nutshell, was gays, guns and God.

Bush’s campaign manager, Karl Rove, certainly got it right this time. From being regarded as the thief of the most controversial American election ever in 2000 (Bush lost the overall vote to Gore but skimmed to a laborious electoral college edge after weeks of intense courtroom drama, aided liberally by his brother, the Governor of Florida, Jeb Bush), in a fifty-eight million vote vindicating victory that, this time, needed no beating around the bush, George W Bush is now the most votedf or American president ever in history. Thanks to his vociferous courting of the four million evangelical Christians who had failed to vote last time around. “The voters have set the direction of the nation,” said an ecstatic President Bush, vowing to continue the war on terrorism and make America proud.

The Senate and House of Representatives are now controlled by the Republicans, and all three branches of government: the Executive, Legislative and Judiciary seem firmly in neo-conservative clutches. With most Supreme Court judges now over the age of 65, and the illness of Chief Justice William Rehnquist, the door is now open for Bush to exercise his Presidential right to nominate justices in the conservative mould of his two favourites on the court — Justices Antonin Scalia and Clarence Thomas — and so ensure a legacy that goes on working for years.

While news of Bush’s victory may have engendered dismay among Muslim countries around the globe, not so for the majority of its ruling elites. Take the Middle East for example. Or Pakistan, for that matter. E-votes tabulated on globalvote2004.org suggest that Bush would garner 37 per cent of the popular vote in the Arab world, in comparison to a 9 per cent global average. And while an informal gauge of voter sentiment around the vote tabulated on www.betavote.com estimated Kerry leading by 75 per cent in Pakistan, the establishment staunchly supported Bush. “Personal contacts play a very important role in decision-making in today’s world of politics,” said Pakistani Information Minister, Sheikh Rashid Ahmed, “and President Pervez Musharraf and Bush enjoy a close personal rapport. “We expect (President) Bush’s new term in office will augur well for the Kashmir and Palestine disputes and for Pakistan’s progress and prosperity.” 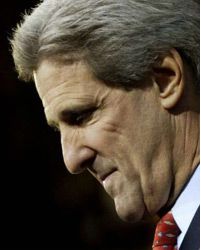 It was a sentiment echoed by the KSE 100 stock index earlier that day, which rose 22 points on the news of Bush’s relection to the American Presidency. Investors banking on Bush retaining his office caused the index to surge by 85 points in tandem with the incumbent President’s headstart in the polls. Anticipating changes and uncertainty in the US policies toward Pakistan in the case of a Democrat win, the index fell dramatically when Senator John Kerry started to erode Bush’s lead in the electoral college votes — only to rebound once again with the news of Bush’s probable victory.

A sizeable section of the financial community believe that Bush’s association with the Pakistani elite during his first term have proved him a reliable ally of Pakistani business and a trusted friend — at least for now — to the sitting establishment. “There will be a continuity in financial and economic policies under Bush, which have so far, been conducive to Pakistan’s economic interests,” says a senior banker. “Increased access to American markets for Pakistani textiles and other products will also help our trade and industry. Bush may be bad for Muslims on the whole, but he is definitely good for Pakistan.”

But is he really?

There can be no disputing the facts: Pakistan has come a long way since Bush ran for the presidency in 1999, when he could not even recall Musharraf’s name. Encouraged by the Pakistani leader’s cooperation, the Bush administration wrote off 1.5 billion dollars of Pakistani debt, and approved three billion more in aid as reward for his acquiescence with the war against terror. Pakistan was upgraded as a major non-Nato ally, with the Commonwealth following in its footsteps and voting Pakistan back into its club, in spite of its undemocratic credentials. USAID, the governmment development agency, committed 306 million dollars to Pakistan, and a further 120 million dollars were apportioned for health and law enforcement aid. Furthermore, its financial institutions and credit agencies upgraded their assessment of Pakistan’s economic strength, leading to greater private sector lending. Bush also held off imposing sanctions on Pakistan after the A.Q.Khan fiasco, crucial in maintaining our newfound economic confidence. Compare this to the Democrat contender Kerry, who has on numerous occasions expressed his willingness to be tougher on Pakistan, and the benefits of a Bush administration seem almost axiomatic. Writes Nick Bryant, BBC’s correspondent in Islamabad, “The feeling in Islamabad was that John Kerry would have been more critical of the Pakistani leader — not only raising concerns about his democratic credentials, partly over the so-called uniform issue, but focusing more attention on A.Q. Khan, the Pakistani nuclear scientist at the centre of a proliferation scandal earlier this year.”

But there are other, more pressing considerations as well. Bush may have been good for Pakistan economically, but his legacy has raised deep divisions in an already segmented country. Militancy in Wana and South Waziristan have shot up dramatically. American aid and foreign NGOs have increasingly been branded as subversive instruments of US interests. Kidnappings of foreign nationals, bombings, and assassination attempts, from which neither the President nor the Prime Minister or army generals are sheltered, are on the rise. No longer can Pakistanis hope to escape to that bastion of all basic human freedoms, the United States. As part of the Homeland Security Act, in December 2001, Pakistani male citizens were made to register with US immigration authorities. College applications to the US hit an all time low. Discouraged by intense questioning and body searches, only half the number of Pakistanis now travel to the US for business or pleasure. According to realiable estimates, 1,650 Pakistani Americans were deported on minor immigration offences. And the Pakistani embassy in Washington says that another 5,000 to 10,000 left voluntarily. As for our wayward youth, 58 of them were detained in Guantanamo Bay for engaging in illegal combat against the US in Afghanistan. Today, three still remain in US custody. And even on the economic front, according to a recent LA Times report, Pakistani business leaders could have been better compensated by the Bush administration by expanding its textile and apparel access to US markets. “Under pressure from domestic manufacturers, Washington has given Pakistan expanded access in only a few little-used categories,” it reads.

A second Bush term is deeply disturbing in that its mandate derives from militant evangelical Protestants, Sharon sympathisers, and deeply conservative rural voters from the cow-belt States, who in the words of seasoned journalist Eric Margolis, “have more in common with the Taliban than the rest of the US. “These groups share a loathing of Europe, the UN, the Pope, Muslims in general, Arabs in particular, Chinese, intellectuals, anything international, and truly believe themselves as God’s chosen people.”

Will the world be bushwhacked by neocon agendas once again, entailing more wars against his so-called axis of evil, Iran, Syria — even Pakistan? With a US president who says he communicates with God regularly, and believes himself to be on a ‘divine mission,’ can we conceivably, be next on the hit-list?

“Historically, the second term is one in which there is more freedom to take impartial new decisions disregarding the influence of the Jewish lobby,” believes Najmuddin A Sheikh, Pakistan’s former foreign secretary and ambassador to the US. “There has been a realisation amongst Bush’s camp that injustices against the Muslims have been the main cause of terrorism and this may result in a change in Bush’s foreign policy. Blair, Bush’s staunchest ally in Europe has already appealed to the President to look at the Palestinian -Israeli question. So there is a possibility that the power of the neo-con lobby will be reduced over the next four years.”

If art reflects life, this may well be an overly optimistic analysis of the future. In a poignant snapshot of the expectations in the Arab World, a Cairo newspaper cartoon on the eve of the election depicted a working-class man turning on the television to get the latest on the US election. Read the caustic caption: ‘Let us find out which of the two men will set the world alight.”

All the rather bushed world can do now is wait with bated breath.