It was a far cry from the “reluctant coup maker” of October 1999.  In his recent address,  General Pervez Musharraf declared his intent to enter politics and stay at the helm.  He ended his 90-minute harangue on national television  by declaring himself indispensable for the country.  A feeling of dÃ©jÃ¡ vu was in the air when he announced the holding of a referendum seeking public approval for an extension of his tenure in office for an additional five years beyond the three-year-period stipulated by the Supreme Court.

The general also announced plans to introduce a new political formula, which he believes conforms to the country’s requirement for progress and stability.  He declared that he would play a dominant role in the political system which would emerge after the parliamentary elections  scheduled to be held in October this year.

General Musharraf has often emphasised that he is neither another Ayub Khan nor a Zia-ul-Haq, but appears to be following their script to the letter.  Not only is he holding a referendum in an attempt to legitimise his rule but is also engaged in trying to establish a “king’s party,” using local government as his political base.

The pitch sounded a little too familiar when Musharraf declared that he had never wished to get involved in politics, but had taken the decision to remain in power in the best interest of the country.  “By going for a referendum I have chosen a more difficult path,” he declared.  He called on people to vote for his reform programme.  “I need an assurance that people are in favour of continuity and reform,” he said.  “It will give me political confidence and moral ascendancy.”  But most observers agree that a controversial referendum would only serve to weaken his position and diminish his moral authority.

By drawing a line between those who support him and those opposing him, the General has taken the country towards a dangerous polarisation.   He appears confident that people will approve perpetuation of his tenure as president for five more years, but the referendum will not ensure smooth sailing for him.  On the contrary, his decision to hold a referendum has united political forces across the spectrum in their opposition to his rule.

“We are thankful to the army dictator that he has united the entire nation against him,” said Nawabzada Nasrullah Khan, chairman of the Alliance for the Restoration of Democracy.  Presenting the framework of his new political order, the military ruler said that western democracy did not suit Pakistan — another familiar refrain.  “We should have a system of government that suits our environment,” said General Musharraf. 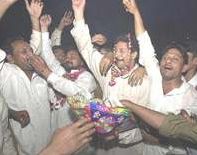 With this declaration, President Musharraf has taken a huge gamble and staked his future on the outcome.  Despite public support, the turnout in the referendum is expected to be very low, making his position highly controversial.

The referendum announcement has not come as a surprise as the General had made it apparent a long time ago that he was not going anywhere, despite his promise to hold parliamentary elections. Like past military rulers, he is using the referendum as an instrument to legitimise his stay in power.  Under the constitution, a president is elected by the two houses of  Parliament and the four provincial assemblies.  But being in active military service, General Musharraf could not legitimately contest an election.  Besides, said a senior aide, the President was not prepared to submit himself to the mercy of an elected parliament.  “He wants to deal with parliament from a position of strength,” said a close aide.  But most observers agree that a controversial referendum with a very low turnout will, in fact, weaken General Musharraf’s position and moral authority.   He may still face serious problems in getting his position ratified by the elected parliament. Even his staunchest loyalists agree that in the event of totally fair and free elections the parliament would most likely be dominated by anti-Musharraf parties.   A manipulated election result may fuel public discontent and further isolate him.

General Musharraf is relying on the Nazims and parties like the Pakistan Muslim League (like-minded) the Muttahida Qaumi Movement, the Millat Party and the Tehrik-e-Insaf to mobilise support for him in the referendum.  These parties have supported the referendum proposal, but may have strong reservations in actively mobilising the voters.  Besides, they have a very limited support base compared to the parties opposing General Musharraf.  Similarly, the Nazims , most of whom are associated with the opposition parties, may not be very helpful in bringing out the voters.  In a desperate attempt to ensure a respectable turnout the government is considering setting up mobile polling stations and lifting the identity card restriction.

In an unprecedented move, General Musharraf has also decided to address public rallies to mobilise public support.   No other military ruler has resorted to such a populist move.   It may help him in making direct contact with the people, but will also entail serious, long-term political consequences.   It would not only involve the military more deeply in politics, almost turning it into a political party, but bring it directly into political confrontation.   This situation may have serious repercussions for the military as an institution and create divisions within the ranks along  political lines.  General Musharraf appears to have  the top brass totally behind him, but controversy over the referendum can trigger a political crisis, seriously affecting his position.

His decision to hold a referendum came amid strong opposition from almost all the main political parties in the country, ranging from the conservative Islamic groups to the liberal and moderate political parties.   They have called for a boycott of the referendum, declaring it illegal and unconstitutional.  An alliance of five major Islamic parties formed last week has vowed to overthrow President Musharraf’s government, accusing him of “working on an American agenda.”  General Musharraf has admitted that the intelligentsia were  against the referendum, but added that he was confident of getting public support.  He said the referendum would draw a clear line between those who were with him and those who are not.

Most observers agree that General Musharraf could have achieved a consensus over his staying on as president.  He would have been acceptable to all the major parties, had he not tried to adopt the PML (like-minded) as a “king’s party” and engage in a personal tirade against Benazir Bhutto and Nawaz Sharif.  Instead of insisting that the two leaders did not have any role in politics, he should have left it to the courts and the polls to decide their fate.

Nawaz Sharif has already been barred from holding any public office for ten years, but there is no restriction on Benazir Bhutto.  Despite corruption charges, she remains the strongest political figure in the country. With Nawaz Sharif out of the way, her Pakistan People’s Party is likely to emerge as the single largest party in the parliament, provided the polls are free and fair.   Some reports suggest that the government  already has a plan to isolate the PPP.   “It is almost like a 1988 situation when the military created the IJI to stop the PPP from sweeping the polls,” said a senior official.  An effort is being made to forge such an alliance around the PML (like-minded).  But things will not be so easy for the military this time around.

In a most scathing attack, Miss Bhutto described the referendum proposal as “a war on democracy,” and called for President Musharraf’s ouster.  The former prime minister, who has been living in exile in London and Dubai for many years, said President Musharraf must resign and hand over power to the chief justice.  “The illegal referendum General Musharraf has resorted to is a challenge to the people of Pakistan who must accept the challenge and reject him by a no vote,” she said in a statement.  A visibly provoked Bhutto is now set to return home to challenge General Musharraf.  According to PPP sources, she may be back a few months before the polls.  She is taking a calculated risk as her arrest could help mobilise support for the party.

The referendum plan has also evoked strong reaction from the independent Human Rights Commission of Pakistan which described  the move as a “threat to the basic human rights of the people of   Pakistan.”  It said the proposal “enjoys the sanction neither of the country’s basic law nor of the generally accepted principles of  democracy.”

President Musharraf, a key ally in the US led war on terrorism, has failed to elicit favourable international response to his decision.   In London, the 54-nation Commonwealth of Britain and its former colonies said that the referendum plan falls short of promises made by the military ruler  to return the country to democracy.  Pakistan’s membership to the group was suspended after the 1999 coup.  “The road map announced by General Musharraf last year did not include provision for a referendum,” pointed out Don McKinnon, Commonwealth Secretary General.

In Washington, a State Department spokesman referred to the need to follow constitutional procedures but stopped short of criticising President  Musharraf.

His plan  to create a “guided democracy,” where the military would continue to cast its heavy shadow may trigger a backlash.  A national security council comprising the chiefs of the three services would be formed to keep a watch on the elected government and the parliament.  This manipulated political set-up may perpetuate military dictatorship but it will not prove acceptable to the people.