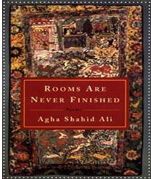 The Kashmiri-American poet, Agha Shahid Ali (1948-2001), published a new poetry collection, Rooms Are Never Finished, in the last few months of his life.  This poignant and remarkable work was shortlisted for America’s coveted  2001 National Council Book Award and reveals the poet at the height of his powers.  Dedicated to his late mother, it is framed by her death from brain cancer in 1997 and the poet’s own battle against the same illness, shortly afterwards.  Both merge into a brilliant contemplation of life and death, of reclamation, exile and  memory, imbued with metaphors and a rich, breathtaking imagery.  Central to the collection are two spellbinding elegies, or songs of lamentation, each consisting of a sequence of poems.  The first, ‘From Amherst to Kashmir,’ about the poet’s mother,  is structured around the story of Karbala and moves in and out of time, to knit past and present into a narrative beyond time.  The second, ‘Eleven Stars Over Andalusia,’ a work of extraordinary beauty, is an adaptation of Mahmud Darwish’s original, about the expulsion of the Moors from fifteenth century Spain.

Rooms are Never Finished is divided into four parts, but in a brief note, the author explains  that the conflict in war-torn Kashmir forms the backdrop to this collection and was the focus to his previous volume, A Country Without A Post Office.  He and his family took his mother back to that devastated land for burial, “for she had  longed for her home during her illness” in America.  She had come to Amherst for treatment and died there.  His moving poem ‘Lennox Hill’  plays on the word ‘Mother’ and describes her last days, overlaid with dream-like sequences of Kashmir. He writes:

“As you sit here by me you’re just like my mother,”

she tells me.  I imagine her: a bride from Kashmir,

she’s watching at the Regal, her first film with Father.

If only I could gather you in my arms, Mother

The book goes on to part I, “From Amherst to Kashmir”, a sequence which opens with an exquisite prose-poem, ‘Karbala: A History of the House of Sorrow.’  He writes:

Memorializing Hussain on the tenth of Muharram (Ashura) is the rite of Shi’a Islam — so central that at funerals those events are woven into elegies, every death framed by that “Calvary.”  For just “as Jesus went to Jerusalem to die on the cross,” Hussain “went to Karbala to accept the passion that had been meant for him from the beginning of time.”

Using Karbala as a leitmotif, he takes the reader back to AH 61.  In elegant, sparse and powerful prose, he reconstructs the story and symbolism of Imam Hussain’s sacrifice as well as the suffering of the survivors, particularly Hazrat Zainab.  The poem then welds this into a memory  of  a majlis in 1992:

Death had turned every day in Kashmir into some family’s Karbala. We celebrated Ashura, in the afternoon — because of night curfew.  That evening, at home, my mother was suddenly in tears.  I was puzzled then very moved.  Since she was a girl, she had felt Zainab’s grief as her own.

The ensuing poem is a translation of a Kashmiri elegy sung at his mother’s funeral, Zainab’s Lament in Damascus.  This is followed by Summers of Translation which refers to Faiz’s poem Memory and  recalls  his mother reading Faiz out to him and helping him select poems for translation.  (Agha Shahid Ali’s poetic translations of Faiz subsequently appeared in a slim volume, The Rebel’s Silhouette).  He goes on to provide a brief glimpse of Begum Akhtar, singing a meditative poem by Ghalib in Rag Jogia and then reverts to Muharram and Kashmir’s mourning.  The revolving themes of mother, Muharram and Kashmir continue to be developed in subsequent poems, interjected  with glimpses of airports, an old record, or black and white film — the whole interposed with a medley of  cross-cultural references.  The poet’s personal anguish becomes an expression of deeper, universal emotions and mysteries. Furthermore, these poems, written in a wide range of poetic style and form, include a translation of Faiz’s ‘Memory’ which begins:

of your voice, your lips as mirage, now trembling.

Grass and dust of distance have let this desert

bloom with your roses.

disguised as tulips, as roses —

has the earth forever

In this collection, themes of exile, separation and loss, are layered with several levels of meaning, both literal and metaphorical and include the poet’s imminent farewell to this earth.  The second section of Rooms Are Never Finished consists of poems which look at the world from a removed plane, a place of limbo, in which the poet is but a passenger, passerby or guest. In the title poem, ‘Rooms Are Never Finished’ about reality and illusion, a voice guides the poet somewhere in space and time and says:

Come to the window: panes plot the earth

apart.  In the moon’s crush, the cobalt stars

the Urals’ mezzotint. Why are you weeping

Agha Shahid Ali has explored many different poetic forms, including canzones, sonnets, tetra zima and he has introduced aspects of the marsia or elements of shikwa.  There are several ghazals in English too, written with remarkable skill, in which the second line of every couplet repeats a phrase, giving it a new meaning, culminating with the poet’s name, often with a lightness of touch, a quiet mocking and wit.

Part III consists of ‘Eleven Stars Over Andalusia,’ a breathtaking  adaptation of an Arabic poem, by Palestinian writer Mahmud Darwish.  In an end note, Agha Shahid Ali explains that he was sent “a very literal version”  and “asked to convert it into poetry.”  He finally found a way of tackling it, after reading Lorca.  He adds that the title ‘Eleven Stars’ comes from the Quran and is a reference to Joseph’s dream, in which he saw 11 stars and the sun and moon prostrate themselves before him.  Joseph was told by his father, “Say nothing of this dream to your brothers lest they plot evil against you.”

Agha Shahid Ali turns ‘Eleven Stars Over Andalusia’ into a magical elegy, divided into 11 poems about a once-brilliant culture and people, marginalised by history.  In the second poem, “How can I write above the clouds?” he writes:

But Granada is made of gold,

Of silken words woven with almonds, of silver tears

In the string of a lute

‘Eleven Stars over Andalusia’ not only depicts the exile and expulsion of the Moors from Spain and their farewell to their enchanted land, but cleverly provides an analogy with the homelands of the author and translator — Palestine and Kashmir.  These poems also conveys the poet’s personal lament for the world that he too will leave behind soon.  In the fourth poem, ‘I am one of the kings of the end,’ he writes:

I’ve passed over this land, there is no land in this land

since time broke around me, shard by shard.

I was not a lover believing that water is a mirror,

as I told my old friends and no love can redeem me,

to let me pass, tomorrow, close to yesterday.

The eleventh and final poem, ‘Violins’  begins and ends with the couplet:

The fourth and last section of this volume, consists of a single poem, ‘I Dream I am at the Ghat of the Only World,’ a wonderful meditative work with memories of all that is dear to him — particularly people such as his  mother, poet James Merrill, Eqbal Ahmed, Begum Akhtar, all of whom have travelled to “the other shore.”  The central image holding the poem together is Ghulam Mohammed, the waiting boatman, who will  ferry the poet across the water.

In this exceptional collection, Agha Shahid Ali has brought English language poetry in the sub-continent to new heights.  He has also conveyed the essence, depth and range of Indo-Muslim culture as no other English language writer has, in fact South Asian English poetry has probably never seen anything quite like it.