“If it is the law of the jungle, then any and everything prevails” 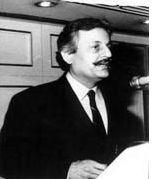 Q:  What is the constitutional position on the referendum?

A: Let me set the record straight and clear the misperception the regime is creating. Their spokesman has said the president will use the constitutional option. There is no constitutional option available to the regime to go in for a referendum in terms of getting the president elected. Article 48, sub clause 6 of the constitution does provide for a referendum, but that is essentially for a question of national importance.  We have to differentiate between this and the question of an election.

The 1973 constitution stipulates under article 41 that the president of Pakistan is to be elected. It specifies his electoral college which is the parliament and the provincial assembly. In Schedule 2 it specifies the manner and mode of the election and it also gives the various weightages each vote is going to have on the basis of which the calculation for the election of the president is going to take place.

It is very clear that  a person who is seeking the office of the president under the constitution has to be elected and he cannot get himself elevated to that office through implication.  The question in the referendum may be that this is my reform agenda, do you accept it or not.  If you do, then for the purpose of continuity I will continue for the next five years.  Even if it is a direct question, should I continue for the next five years as the president of Pakistan, that will still not fall within the ambit of seeking election which the constitution stipulates.  Elevation to the office of president through a referendum hits at the very basic root of the constitution.  This has been spelt out by the Supreme Court in the very judgement through which this regime seeks legitimacy, that is the Zafar Ali Shah case.  Even on the basis of the limited power given in the judgement, the constitution cannot be amended to  the extent that it affects the basic structure.  When you are denying parliament and the provincial assembly the right to elect the president, you are hitting out at the federal parliamentary structure of the constitution.  In law there is no justification.  If it is the law of the jungle then any and everything prevails.

Q:   How would the disqualification clause come into play?

A: Apart from the clause, the first major question is that you cannot hold two offices.  General Musharraf is right now in the service of Pakistan and in order to seek election he has to resign . There has to be a gap of two years.  Under the rules there is a waiver.  Even if he exercises the waiver, he cannot seek election while being in the service of the government of Pakistan.

Q:  The regime says that certain reforms have been set into place and to safeguard the reforms some elements of the current dispensation must stay on.

A: I would like to ask the regime what are the reforms that have been put into place.  Is it a reform that your economic sovereignty is held hostage by donor agencies, is it a reform that due to conditionalities you have to increase utility charges every three to four months.  Due to the deregulation of oil pricing, every fifteen days the common man is faced with a mini-budget and has to rearrange his priorities.  For a person on  a limited salary this fluctuation is a life and death fluctuation. Are we talking about a continuation of the ban on political activities and the political process, a denial of human rights, of selective accountability?

Q:  There is the issue of corruption.

A: Till today all we have witnessed through the NAB ordinance is selective accountability.  It started out with politicians, then as the political designs of the regime became broader, the targeting of politicians started to become narrower. Today, the only target of the NAB law is the Pakistan Peoples Party and its leadership because we continue to defy the regime.  Look at the spectrum of politicians and political parties today who are supportive of the regime, a lot of them have been exonerated.  It has been said that there were perceptions of corruption against them and there is no sufficient evidence.  In juxtaposition, Senator Zardari continues to be in prison for six years without a conviction.  If you’re ready to switch loyalties, then you get a clean bill of health, but if you want to stick to your principles and your party, then there’s the NAB law.  The Punjab leadership of the Muslim League Quaid-e-Azam was known for its bank loan defaults, its involvement in the cooperatives scam, but do we hear of it? Another newly created party in Sindh, the SDA, has a number of leaders known for their corruption.  One of them, a former minister, had warrants of the NAB out against him, but the warrants have been withdrawn.

Q:  What about the regime’s liberal agenda?

A: Much has been talked about what they are selling to the west, that we are talking about a liberal, progressive society and fighting terrorism.  The Peoples Party from its very inception has fought fundamentalism, when we used to talk about an intolerant view of Islam, of adopting a progressive view, we were dubbed as kafirs.  When we spoke about the Taliban policy we were called a security risk.  After the 11th of September our position stands vindicated when the establishment takes a turnaround and begins to uphold the principles that civil society in Pakistan had always been championing.

But you still find a duality in the policy of the regime, a tilt towards the right-wing elements.  The ARD and the Peoples Party were prevented from holding a meeting on the 23rd of March at Mochi Gate, but the Jamaat-e-Islami was given permision to hold a jalsa at Liaquat Bagh and that jalsa was shown on state- controlled television.  Political leaders were arrested on what were claimed to be substantive charges, but they were released and the charges vanished into thin air.  All along you find this soft pedalling on one side, on the other side you do not find the government building any bridges.  They cannot convert Pakistani society into a tolerant society or fight terrorism in isolation.  You have to take along those forces in civil society, the NGOs, liberal democratic intellectuals and political parties who are supportive of this point of view.  The regime is not building bridges with them, it is not moving towards forming a national consensus on these issues.  As a result, its isolation is growing.

Q:  How do the political parties propose to deal with the situation if General Musharraf goes ahead  and declares himself president for the next five years?

A: It will take some time for the political parties to work out a strategy to deal with the situation, but one thing is clear. Once the political process gets under way it has its own dynamics and it become very difficult for anyone to try and control it in toto.  The very concept of an election and the very fact that a parliament, no matter how gerrymandered it is, comes into existence unleashes a lot of new forces.

Zia brought in a hand-picked parliament, but when it came to the crunch he was unable to get his own speaker elected, he was unable to get the 8th amendment passed in the shape that he wanted.      A lot of power and a lot of ground is going to start slipping from under the regime’s feet once the political process gets going, no matter how controlled.  In the last two or three weeks, with just a little gearing up for elections, a new political picture has begun to emerge.  What seemed like a totally impregnable position has all of a sudden become very hazy.  Given the history of referendums in Pakistan, given that both Ayub and Zia polled 97.7 per cent, from the word go, credibility is going to be at its lowest ebb.

Q:   Do you expect the elections to be fair?

A: Most certainly not, because the pre-poll rigging has already been set into motion.  The chief executive has said that he would not allow the leadership of the two mainstream political parties to come in and contest elections.  As far as Ms. Bhutto is concerned, it is her constitutional right to seek election and there is no law that debars her.  Merely on the basis of whims she cannot be kept out. That defranchises the people of Pakistan from electing or rejecting a particular leader through the electoral process.

Then, we are not being told what is the base list that is being used to update the electoral rolls.  Under law the delimitation should have been done by the election commission but has been essentially done by a cell within the NRB.  The nazims of the district administration were asked to send maps to that cell. In the delimitation, they have taken care to ensure that those localities and units where there is a homogenous vote of the PPP are broken and split. They have also taken proposals from the candidates of the PML Quaid-e-Azam to try and give them tailor-made constituencies.  Local administration and the police play a very important part in our elections and people are being posted on the calling of the PML Quaid-e-Azam. There will be a similar situation with the polling staff. Then there is selective accountability and pressure will be exerted on politicians to change sides or face the music.

The only thing we can hope for is that the election commission will exert itself and not allow the regime to interfere, and that neutral observers will play their  role.