“This referendum could bring about a 1970s-like situation” 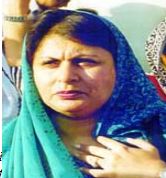 Q:  What is your party’s position vis-a-vis President Musharraf’s referendum?

A: The PML(N) has already rejected the proposal as illegal and unconstitutional.  Such a referendum would be a deviation from the constitution’s parliamentary structure.  It would also violate the Supreme Court judgement through which the regime had sought legitimacy and which had given it a three-year term to implement its agenda.

The military government has not only failed to implement this agenda but its actions have exacerbated the country’s socio-political and economic problems.  People are not going to support a regime that has been responsible for high inflation, a depressed economy, and a worsening law and order situation.  The country’s agricultural sector is in dire straits as is the industrial sector.

Q:  How would you distinguish General Musharraf’s referendum from that of his predecessor 18 years ago?

If Musharraf manages to win the referendum [with help from the] administration, its repercussions on the federation will be disastrous.  There is already a lack of trust between the federating units, and the totalitarian policies which the present regime wants to reinforce through this referendum could bring about a 1970s-like situation.

Field Marshal Ayub Khan is yet another example of a military adventurer imposing presidential rule.  The presidential election held by Ayub Khan was won by him through massive rigging and it created an unbridgeable gulf between the two wings of the country.  Fatima Jinnah was supported by the people of East Pakistan, while Ayub Khan drew his support from West Pakistan.  The assumption of the office of president by Ayub Khan paved the way for the creation of Bangladesh.

Q:  But the PML under Nawaz Sharif supported General Zia’s referendum.  Do you think that was a mistake?

A: PML at that time was in the process of evolution. Anyway, much water has flowed under the bridge since then and rather than lament past political mistakes, one must avoid repeating the same.

PML(N) was created before the 1997 general elections and being a political party we believe in democracy.  No democrat can support a dictator in perpetuating his rule through unconstitutional means.

Q:  How does the PML(N) plan to register its opposition to the referendum?

A: Since the party has rejected the plan as unconstitutional, it would like to resist the same in an active manner rather than passively as was the case during General Zia’s referendum.

We are also part of the 16-party Alliance for the Restoration of Democracy (ARD), which is likely to take a decision pertaining to the referendum in its forthcoming summit meeting at Islamabad on April 7.  The ARD will probably outline a strategy to counter the presidential referendum and PML(N) will abide by its decision.

Q:  What policy has the PML(N) formulated with regard to the town and district nazims and general councillors belonging to the party on whose support General Musharraf is reportedly banking for a favourable result in the referendum?

Q:  What effect will the presidential referendum have on the forthcoming general elections?

A: The PML(N) is all set to surprise General Musharraf in his intention to hold a referendum.  Our response will not only be from the PML(N) platform but from that of the ARD too.  The regime has set the ball rolling without realising which way it will turn and what results it will yield.

The armed forces are meant to guarantee the country’s sovereignty and independence but the present regime has allowed US marines to arrest Pakistani nationals and others who were provided shelter by locals.  Is Pakistan still a sovereign state?