As Pakistan’s burgeoning population of extremists attempt to bring their grim battle to the doorstep of Islamabad’s power corridors, they have begun a calculated campaign to strike fear in the hearts of the most vulnerable section of society: women.

Their marching bands are sending a warning across to the country’s female population that the time has come for them to pick sides: either they are for ‘Islamisation’ in the country or they are against it. For those who choose wisely, say the messengers, there is no fear; the rest are doomed to an uncertain future.

The new campaign has taken the form of threats issued to female teachers in some of the NWFP’s upscale schools. The warning shots from the fanatics convey the impression that the veil-less female teachers associated with an educational system that is perceived to be westernised are the enemies of Islam.

Some of the teachers who have been warned through mysterious messages dropped at their residences, or even through calls on their cell phones, are mortally afraid. So afraid that when Newsline tried to speak to one of them on the issue, she put the phone down, saying that she did not want to add more strain to her already troubled existence.

Taking precautions against an unannounced strike, some of Islamabad’s best private schools have introduced stringent security measures. Extra guards have been posted at the main gates, parents have been issued ID cards, visitors are being screened and female teachers have been told to avoid contact with ‘unfamiliar faces’ on school premises. Additionally, teachers have been asked to ensure that they are accompanied by a male escort on their way to and from school.

The new assertiveness of the religious right vis-Ã -vis women has also taken the shape of routine harassment: E-7, Islamabad’s most affluent sector, is no longer idyllic for an evening stroll for the area’s female population. Rehana, 31, who lives on the main road, was almost shoved off the road by two motorcyclists, who hurled a string of obscenities at her and squeezed in a warning to stop wearing jeans — to them, a symbol of vulgarity and American culture.

Worryingly, these are not isolated incidents; they have become frequent against the backdrop of an unusual upsurge of violence against the country’s battered half. The Human Rights Commission of Pakistan has noted that numerically instances of the breach of the rights of women have been on the rise, inspite of the government’s much touted women-friendly measures, such as the reservation of 33% seats for women at the union council levels, increasing the number of reserved seats for women in both the national and provincial assemblies and further the passage of the Women Protection Bill and the inclusion of sexual harassment at the workplace within the official definition of misconduct. The flow of disturbing news from across the country about the plight of women has not abated. Newspapers are full of ghastly stories of gang-rapes, honour-killings, acid-throwing, sale of women and other instances of degenerate chauvinism targeting women.

The ‘poster-case’ of this trend has been the audacious murder of Punjab’s minister for social welfare, Zille Huma. When the lunatic, reportedly a former prayer leader, fired shots at her from close range, he was mumbling a mix of Arabic words and Punjabi slogans which, to one eyewitness, sounded like praise to Allah for allowing him to do his duty.

His stated reason for killing the minister ranged from her ‘inappropriate’ dress code (she was wearing a shalwar kameez, with a dupatta covering her head at the time of her murder) to her being in a decision-making position, which according to the murderer was un-Islamic.

The locals who know the murderer say that he is ‘normal’ and the reports about his disturbed state of mind are incorrect. Whether these reports are true or not, the fact is that the murderer has found many willing backers who are paying for his defence, as they did in 1992, when he murdered four other women, all of whom he had branded as women of “easy virtue.” Some of his supporters happen to be local notables and businessmen, who had applauded his actions then too.

The late minister’s murder has spread panic and fear among other public representatives. Federal cabinet sources say that all female ministers, ministers of state and advisors have been told to take extra precautions about their security. Some of them have already deployed an extra layer of guards for protection. Ironically, the women under pressure are among the most privileged of the social strata and are supposed to be the first line of defence for the rights of those who are exceptionally vulnerable and truly threatened.

The most dangerous aspects of this new threat to the women of Pakistan revolve around its tone of religious fervour and the fact that its scale is truly national, cutting across provincial and class divides, making both rural and urban areas equally vulnerable theatres of assaults on female rights.

Having a government that at least promises to empower women would have been some consolation if it were not for the politics surrounding the whole issue.

The ruling party, rooted in the male-dominated heartland of the Punjab, which has produced many shameless misogynists in the past, is no knight in shining armour. In fact, some of its stalwarts are vehemently opposed to a version of ‘enlightened moderation’ that they believe would lead to the ‘westernisation of Pakistani women.’ They were strongly opposed to the passage of the Women’s Protection Bill and kept stalling, but eventually had to yield before the awesome power of the president in uniform — however, not before they had succeeded in tempering the original version to placate their friends in the MMA, whose bigoted views they tend to share.

To them, female subjugation is a perfectly acceptable cultural and political norm. So while they pay hypocritical lip service to the cause of women in public, privately they work against the agenda of their government. 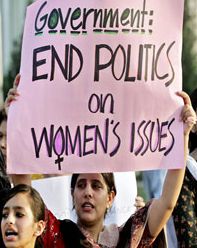 The national decision-making scene, too, does not look very reassuring. The Pakistani state is grappling with the challenge of the religious right in a manner as if they were resolving a family feud: settled on family turf and terms, with little consideration for the universal rules of justice. The mullah, armed with a sickle and hammer, and ever willing to smash to smithereens the remains of female liberty in this country, is still a valuable asset. Not as a jihadi to be launched in a faraway land for woolly strategic gains, but as the new challenge, the new threat to the stability of Pakistan, tackling which requires not democracy but continuity of a general in power.

The right wing’s anti-women agenda presents a worst-case scenario to the world to back the present government’s ‘liberal policies.’ It’s power politics at play here: women don’t really count, except as pawns to be used to win short-term goals. That is why for all the media hype that the threatening letters to female teachers generated, we still do not know who the writers and the postmen are.