“Looking at Afghanistan from the perspective of other countries will only cause trouble, not help us” 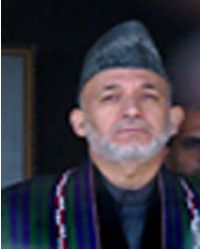 On a recent visit to London, a beaming Hamid Karzai was photographed with Tony Blair on Downing Street, receiving a teddy bear as a gift for his first-born baby, a son called Mirwaz. The Afghan president soon lost his smile, though, as he was apprised of the relatively meagre financial support western capitals were prepared to give their allies in Afghanistan, compared to what they were doing in other war-torn parts of the world.

While President Karzai strongly believes in the global fight against terror, he is concerned that western capitals need to do more to cement their relationship with the Arab and Islamic world. Photo ops with world leaders are all very well, but it’s the delivery of all kinds of support to the deprived masses that is more important, says Karzai. Sipping tea in his hotel suite overlooking Hyde Park, the Afghan president was unable to hide his frustration with the way British commanders were handling the situation in his country, saying that he had discussed this issue with Tony Blair. “Britain is the second biggest bilateral donor to Afghanistan and has been at the forefront of our fight against terror. It is a country which knows our part of the world very well, and therefore our expectations of Britain are high.”

Karzai has much to say about positive developments on the ground, but at the same time, he highlights the continued threat posed by the Taliban. “I was presenting a rosy picture of political developments in Afghanistan. The re-building of state institutions, children going to school and the reconstruction of major highways throughout the country is almost complete. But I am not painting a rosy picture as far as defeating terror is concerned. We have suffered many casualties, and so too has the coalition. Last year, almost 200 schools were destroyed by terrorists in the areas close to the Pakistani border; so we are talking about almost 200,000 Afghan children who can’t go to school because of the terrorist threat. Therefore, the picture there is a sad one.”

Karzai’s main message to the leaders of the Taliban is that “all suicide bombing is un-Islamic. It is totally against our ethics and the teachings of Islam.” He insists that most of the suicide bombers are not Afghans, and that the talk of preparations by the Taliban for attacks in Afghanistan is rather exaggerated. “We are engaged with our brothers in Pakistan on the question of terrorism and, over several months, we have seen some signs (of improvement). There have been fewer bomb blasts around the country and fewer incidents, which is a sign of hope and better cooperation. If this trend continues, we should have a much safer year for the Afghan people. If the trend reverses, then Afghanistan has its course of action as well.”

The Afghan president, who was accompanied by his national security advisor, Dr Zalmay Rasoul, and press secretary, Rahimi, expressed a modicum of satisfaction about Pakistan’s cooperation. “We have not had as many incidents in the last four or five months, and this is giving us reason to hope for a better year in 2007. We have no quarrels with Pakistan. We welcome brotherly and economic relations with them, and we are seeking a more effective, better coordinated fight against extremism and terrorism. If that is achieved, Afghanistan and Pakistan will be the closest neighbours in the world.”

He says that Pakistan should be aware that a sovereign, independent and prosperous Afghanistan is in its interest. “Pakistan already appreciates the dividends of peace, stability and prosperity in Afghanistan,” says Karzai. During the time of the Taliban, “Their exports to Afghanistan were worth 25 million dollars annually. Today we buy goods worth 1.3 billion from them.”

The arrest of senior Taliban officials while crossing the border between Pakistan and Afghanistan gave the Karzai government some clues regarding the whereabouts of Mullah Omar and the training camps in Pakistan, and that was the “cause of anger and anguish.”

When quizzed about Mullah Omar and whether he believed the Taliban leader was in Quetta, Karzai was initially guarded. “I have decided not to speak about this issue. I wouldn’t like to say much about the whereabouts of Mullah Omar or where they (the Taliban) are being trained. But we know they were training there (in Pakistan), recruiting from there and getting financed from there.”

By way of example, he told me that about a month ago, over 100 militants were attempting to cross over the border from Pakistan, and the Afghan army, together with NATO forces and the coalition, killed many of them. “When the army went in to recover the bodies they saw that these people had been given guns, rocket launchers and ammunition worth thousands of dollars, but they were not even given shoes! Some of them were wearing plastics,” he said, referring to the cheap plastic sandals or flip-flops, typically worn by the poor and totally unsuitable for the snowy and mountainous terrain of the border regions. “They are using them as cannon fodder to either kill or be killed.”

While some of his countrymen believe that Pakistan has designs on certain areas of Afghanistan, Karzai does not seem to share that view. “It is in the interest of Pakistan to regard Afghanistan as a sovereign and independent neighbour, and Afghanistan should do the same for Pakistan.”

Questioned about the 200 suicide bombers the Taliban are threatening to deploy in their spring offensive, Karzai responded that they are “mostly from the Middle East and are for sure Al Qaeda followers.” As for the million-dollar question — is bin Laden in Afghanistan or Pakistan — he wearily replied that he had been asked this question too many times: “We have not found his base to provide an answer, but wherever he is, we should capture him.” However, he was clear about where he was not. “He is not in Afghanistan, by the way. I don’t know where he is, but he is not in my country, and neither is Mullah Omar.”

Two years ago, Karzai issued a warning to the multinational force not to use air power over Afghanistan without prior permission of his government. Recently, he criticised NATO leaders over their handling of the Helmand province, where following negotiations with local tribal leaders, but without consulting the government of Afghanistan, British forces left the province in the hands of pro-Taliban forces, causing chaos and forcing many citizens to flee the area. “This is a continuing concern for us. On the one hand, the Afghan people want the fight against terror to continue effectively. We want them (the Taliban) defeated, we want them thrown out of Afghanistan, and we want to prevent them from re-entering. Collateral damage is created, both by the terrorists and those confronting them, and we would like this to be reduced. No one can bear to lose a child or a member of their family, and my strong advice to the coalition and to NATO is to make very, very sure that civilians are not caught in the crossfire.”

Recently, Karzai voiced his concern that the US and Britain were looking at the situation in Afghanistan through the prism of Pakistan. When I asked him if he had relayed this concern, he was emphatic. “Yes, I have passed that message loud and clear to everyone. You see, during the jihad years, the West perceived Afghanistan from a Pakistani perspective, and we have all suffered the consequences of that, even the western countries. Afghanistan is a historical country with thousands of years of proud history, a distinct culture and values, and a distinct population. I am happy that a lot of countries have recognised this. Looking at Afghanistan from the perspective of other countries will only cause trouble, not help us.”