“Musharraf had been speaking to a group of local government representatives in Karachi when his press secretary had interrupted to tell him about the World Trade Center attacks. He immediately perceived the choice that he was about to be faced with ‘I took a fast decision,’ he later told me, ‘but I thought about it very carefully.’ Only afterwards did he consult his aides and senior military commanders. ‘I keep to Napoleon’s view that two-thirds of the decision-making process is based on analysis and information and one-third is always a leap in the dark.” 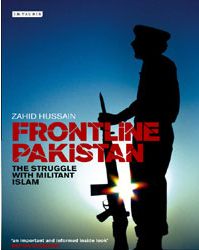 This is how, Zahid Hussain tells us, General Musharraf turned his back on his allies among the Taliban and plunged into the US President’s so-called war on terror. Many Pakistani citizens are likely to point out that their rulers’ leaps in the dark have rarely been proceeded by analysis or the choice of a rational option. Perhaps the most critical leap in the dark in Pakistan’s history was made by General Ziaul Haq when he decided to mobilise in the name of religion the most conservative elements in Afghan and Pakistani societies for jihad in Afghanistan. No heed was paid to the warning that regardless of the outcome on the battlefield, the holy warriors would seek new theatres of action in Pakistan and elsewhere.

The consequences of that fateful decision constitute the subject of Zahid Hussain’s scintillating study, Frontline Pakistan. Few journalists, Pakistani or foreign, have covered the war on terror in Afghanistan and Pakistan so closely and for so long as he has. Capitalising on his instinct to rush to wherever the action is and his ability to access most of the actors, he succeeds in offering us an account of Pakistan’s terrifying drift from crisis to crisis, which is as authoritative as it is comprehensive.

The jihad in Afghanistan, the rise of the Taliban, the US reaction to the terrorist attacks of September 11, 2001, and the highlights of the punishment meted out to the Afghan people have all been covered in minute detail by the international media. Pakistan’s role in this war on terror also has been fairly adequately described by a number of scholars. The chief merit of Hussain’s effort is a painstakingly documented account of Pakistan’s war on terror resulting in the country’s descent into terror.

After a brief recounting of the measures General Musharraf had to take in his own camp, subsequent to what is variously described as a volte-face or a sharp about-turn, readers are introduced to the most prominent militant organisations and the actors who nourished and guided them.

This is followed by a survey of the madrassah network and the jihadi organisations’ terrorist activities in Indian-administrated Kashmir and in some parts of India. The author offers a good deal of fresh information about the blunderous campaign in the tribal areas and the scandalous sale and export of nuclear know-how, before returning to the political quagmire created by the rise of obscurantists to power in some key areas. The account is thoroughly absorbing. At numerous places, one is numbed by the Pakistani authorities’ audacity in playing with the country’s interests. The principal character in the tale is General Pervez Musharraf. Some critics might question the logic of casting a single individual as the sole determinant of whatever Pakistan has chosen to do to itself, but perhaps the author is only trying to capture the country’s political reality.

Hussain has approached the subject with a frankness that is likely to be considered extraordinary, even adventurous, in a society that has surrendered itself to a culture of hypocrisy, equivocation and dissimulation. Most probably he derives his courage to tell the truth, however bitter or uncomfortable to the powers-that-be, from the purpose he has before himself. He has undertaken a hazardous journey into Pakistan’s recent past in order to awaken his countrymen to the challenges the future holds for them.

He concedes that “in the US war on terror, few world leaders have produced results like President Musharraf,” but notes that “within Pakistan his performance in the fight against Islamic extremism is abysmal.” A major reason is a lack of consistency resulting from a lack of commitment.

There seems to be no doubt in Hussain’s mind that “the war against militancy and Islamic extremism can be best fought — and won — in a liberal democracy. Musharraf’s authoritarian rule has blocked any hopes of a democratic process taking root.”

The author sums up the crisis the people of Pakistan face in three quintessential sentences. “Musharraf’s support for the US-led war on terror, his tactical cooperation with certain militant groups and his refusal to embed a culture of democracy and accountability have intensified social, ethnic and religious differences in Pakistani society. These are the faultlines from which a geo-political earthquake could at some point erupt — an earthquake which would make the current regional security situation look positively calm by comparison. Pakistan’s battle with itself is far from over.”

By serving a warning of possible storms ahead to the people of Pakistan and also to its friends and neighbours, Zahid Hussain has done his duty to the people, his calling and, above all, to himself — and done it well and in style.