Mansoora Hassan’s recent mixed media works displayed at Canvas capture the whirling dervishes in spiritual ecstasy. They commemorate Maulana Jalaluddin Rumi’s shab-e-aroos, that is the night when the Sufi poet united with the Beloved. In comparison with her earlier Rumi series, this set of works is more invested in representation rather than the metaphysical or experiential dimension of Sufi ecstasy. Photomontages of dervishes and Ottoman architecture are obscured with shimmery washes and frenzied dribbles of paint but the actual forms of the images remain intact. The new circular and square formats used in most of the pieces, however, reinforce the sense of containment and order which are the backbone of Sufi practice. 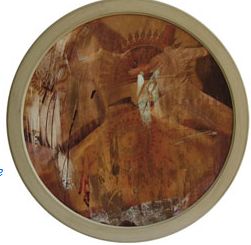 Shab-e-aroos literally translates into the Night of the Nuptial. In most Sufi poetry, the devotee takes the feminine pronoun as he yearns for his Beloved, God. The corporeality of literary imagery has in the West been susceptible to homoerotic interpretations. Perhaps because the work was displayed in a country of Muslim majority, Hassan does not shy away from using Sufi terminology at the risk of irreverence. In fact she revels in it, for stark against the pristine blue and white of tiles and dervish robes, are dabs and drips of virulent red. Whereas red was the colour of marital costume even as far back as the Ottomans, in the paintings its drippiness takes on an almost violent quality, evoking death and consummation simultaneously.

To Hassan’s credit, the repetition of figurative elements across the gallery succeeds in creating a mehfil-e-sama unto itself. The works compel the audience to experience the swirl of an architectural space along with the motion of the dervishes’ bodies. The sense of disorientation created by sandwiching disjointed elements compounded with the films of colour layered over them, stirs up a surreal haze. The feeling of moving across time, space and astral planes heightens as the figurative works culminate in a set of four circular canvases of sheer colour. Their installation in the least lit corner of the gallery, though, impedes optimum effect. 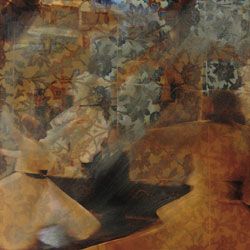 Most interesting to me, were the modestly-scaled works on textured paper. Although some included diminutive whirling figures, and skeletal motifs from Iznik tiles much like the photomontages, they spoke of a personal dialogue with the ceremony rather than of a desire to provide a vicarious experience through documentation. As exciting and exotic an experience as the sama may be, had the entire show been part of a single installation, it would have invited a more poignant response but as a body of works, it straddles the fence of monotony and insufficient exploration.

Also curious is the fact that regardless of common conception of the sama as a religious event, a lot of the sama in present-day Turkey is more performative than mystical. The dismemberment of the Caliphate in the early twentieth century and the institution of a secular government actually resulted in a repression of such practices, which were till then associated solely with religion. They were allowed to go on only in the spirit of cultural continuity in order to foster a Turkish national spirit, divorced from their religious roots. Only recently has there been a concerted effort to revive the earlier religious connotations. Despite the undoubtedly well-intentioned devotionalism of Hassan’s recent body of works, it is difficult to stomach it without a degree of skepticism. Having said that, even as a non-participant and disbeliever, it is admittedly hard to overlook the disarming aesthetics of the sama and its conceptual gravity, to which Hassan’s video does greater justice than the two-dimensional works.