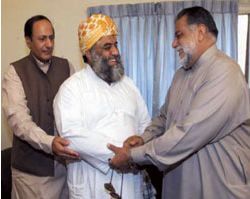 Just one year after its spectacular electoral success, the six-party Muttahida Majlis-e-Amal (MMA) appears to be in troubled waters with signs of a widening division among the coalition partners. Two of the component groups have threatened to part ways in the Frontier and several of its MNAs are believed to be ready to switch their loyalties and extend support to the Jamali government on the Legal Framework Order (LFO).

Some MMA leaders blame intelligence agencies for creating the wedge. They may be right, but most observers agree there are many other reasons for the cracks that threaten the alliance’s survival.

There are tangible signs of the alliance changing its stance on constitutional issues as the leaders desperately try to maintain unity among their ranks. Tough rhetoric aside, the MMA is now adopting a much more conciliatory position over the LFO, particularly on the contentious issue of a firm deadline for President Musharraf taking off his uniform.

The MMA leaders are now prepared to extend the deadline to December 2004. “We are firm on our position that the offices of president and chief of army staff be separated by December 2004,” said Qazi Hussain Ahmed. Earlier, a deadline of August 14, 2003 had been set. Most observers agree that the MMA, which is part of a coalition government led by the PML(Q), will not opt for a direct confrontation with its old benefactors in the military. That is one of the reasons why the MMA has continued to engage in negotiations with the Jamali government on the LFO, despite President Musharraf’s repeated statements that only he would decide when to quit his position as army chief.

The division within the MMA surfaced when the JUI (Samiul Haq) threatened to pull out support from the NWFP government earlier this month, demanding a cabinet post for a party that has only two members in the provincial legislature. The Frontier branch of the Jamiat-e-Ulema Pakistan (JUP) followed suit. The immediate dispute may have been resolved after the two groups were promised representation in the cabinet, but the root cause of their differences lies much deeper.

Some reports suggest that the Maulana Samiul Haq group favours the MMA joining the Jamali government. “He is desperate to get a ministry for his son Hamidul Haq,” said a Muslim League leader. But Samiul Haq is not the only one wanting to jump ship. According to some parliamentary sources, several MNAs belonging to the JUI (Fazlur Rehman) want the alliance to cooperate with the Jamali government. Some reports suggest that even Maulana Fazlur Rehman may not be opposed to the idea.

Maulana Fazlur Rehman, who was a serious contender for prime ministership, is said to have assured President Musharraf his full cooperation on all issues including the LFO if he is elevated to the top job. Intelligence officials who have been negotiating with him seem optimistic about his more flexible approach. They claim that only the inflexibility of the Jamaat chief, Qazi Hussain Ahmed, prevents the MMA from falling in line. 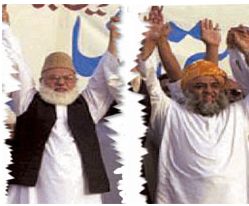 The perception of long-term political gains rather than the need to stand on principle has compelled the Jamaat to adopt a relatively tougher position. The Jamaat leadership has its eyes on the next elections, which they believe they can sweep if they succeed in presenting themselves as an alternative and credible democratic force. They appear quite confident of the Islamists gaining grounds in the Punjab after consolidating their foothold in the NWFP and Balochistan. They are convinced that they would lose their democratic credentials if they gave up their opposition to the LFO or became a part of the coalition government in the centre. “We will not join the government even if we reach an agreement on the LFO,” declared the Jamaat chief.

Its policy of walking the tightrope does not, however, seem to be taking the alliance anywhere. It has not been able to win new sympathisers or consolidate its traditional support base. The MMA’s engagement in futile and prolonged negotiations on the LFO has created confusion in its ranks rather than proving its democratic credentials. The long association of the Islamic groups comprising the alliance with the military and intelligence agencies has also contributed to the adoption of a duplicitous policy.

Despite its divergence on important policy issues such as support for the United States in the war on terrorism in Afghanistan and the crackdown on Jihadi organisations, the MMA has not severed its ties with the military. MMA leaders may have targeted Musharraf personally, but their loyalty to the military has remained unchanged. That is one reason why, compared to other mainstream political parties like the PPP and the PML(N), the military continues to have a conciliatory approach towards the Islamists whom they regard as a logical ally.

The MMA leadership has been engaged in secret negotiations with ISI officials involved in political-fixing. However, because of political considerations, they stopped short of entering into an alliance with the federal government, despite the alliance in Balochistan. The ISI’s move to split the alliance which they had helped to create a year ago is thought to be aimed at bringing the defiant MMA leaders under pressure and teaching them a lesson for going too far in attacking Musharraf.

The Frontier government’s poor performance and its attempts to impose hardline Sharia rule in the province have alienated the urban middle class and disillusioned its supporters. Its move to Talibanise the NWFP has certainly not helped the MMA’s effort to present itself as a moderate Islamic force that would be likely to make political inroads in the Punjab and Sindh.

Besides pushing for the adoption of Islamic laws, the administration has pledged to end co-education and close down movie theaters, which it considers to be a western violation of traditional norms and values. The administration has also ordered schools to replace shirt and trouser uniforms with the traditional shalwar kameez, terming the wearing of western dress unIslamic.

Most analysts agree these retrogressive measures are a part of an attempt to impose a Taliban-like orthodox Islamic system. There is a clear indication that the province is going to see an increased role for religion in political and social life. These measures have fuelled intolerance and given a free hand to the mullahs who are opposed to female education. Non-governmental organisations working in the field of girls’ education are particularly apprehensive of a clampdown by the mullahs, who accuse them of spreading “obscenity.”

“We feel very vulnerable,” says Marium Bibi, a tribal woman who had provoked the wrath of Islamic zealots by opening schools for girls in remote villages. Her organisation, Khwendo Khor, runs more than 40 schools in the most conservative parts of the province. Last year one of its offices was bombed after Marium Bibi refused to close down schools.

The MMA demands abolition of the 25 per cent seats reserved for women in the national and provincial assemblies, saying they have no business in parliament. The hardline obscurantist policies adopted by the MMA have had an adverse effect on the economy. The defacement of billboards carrying pictures of female models and fears of mullah rule have prevented domestic as well as foreign investment from coming into the province.

It was a virtual revolution through the ballot box when the Islamic alliance swept the polls in the North West Frontier Province in the October elections, deposing the traditional power elite. The Islamic parties consolidated their position in Balochistan and emerged as the third largest bloc in the National Assembly. But there is a big question mark about whether the Islamic parties will be able to maintain their political hold in NWFP, leave alone extend support to other provinces.

It is very apparent that the Islamists owe their electoral success, which was limited to the Pashtun areas in NWFP and Balochistan, to their coming together on one platform and the prevailing anti-American sentiment in the region in the wake of the attack on Afghanistan. The code of conduct set by the election commission seriously hampered the other anti-Musharraf parties and benefitted the alliance. There are several anomalies that helped to amplify the actual strength and popular base of the religious parties. While the MMA was fourth in the popular vote (11 per cent of the vote), it won 53 national assembly seats. It later gained an additional 14 seats reserved for women and the minorities.

With cracks developing in the alliance which bring the long-term survival of the Frontier government into question, it will be very difficult for the MMA to maintain its hold. Its narrow ethnic base is not helpful in facilitating an expansion of the alliance’s influence to other parts of the country. The manifest contradictions in its policies have also disillusioned potential sympathisers.