The Hudood Ordinances were promulgated in 1979 by Zia-ul-Haq in his drive towards Islamisation. The laws came into focus in the early ’80s when the first punishments for stoning to death and whipping were awarded. So began the crusade for the repeal of the Hudood Ordinances, spearheaded by Women’s Action Forum (WAF). But while civil rights groups have over the years played a pivotal role in helping to dilute the negative effects of the Hudood Ordinances, none have been successful in achieving their repeal.

The Hudood Ordinances are a compilation of five laws dealing with the offences of theft and armed dacoity; qazf (bearing false witness); use and trafficking of drugs and consumption of alcoholic beverages; rape, abduction of women and zina (adultery and fornication and the mode of executing the punishment of whipping under the Hudood Ordinances). Of these, the Zina Ordinance that deals with the offences of rape, abduction of women, prostitution and adultery is the most controversial.

The Zina Ordinance makes adultery and fornication an offence. Under this Ordinance, “a man and a woman are said to commit zina if they wilfully have sexual intercourse without being validly married to each other.” Before this Ordinance, fornication was not an offence under the Pakistan Penal Code. Adultery with a married woman was a private offence for which only the man could be punished. Under the Zina Ordinance, an offence of rape is committed where a person has “sexual intercourse with a woman or man, as the case may be, to whom he or she is not validly married” and where the act of sexual intercourse is committed without the consent of or against the will of the victim.

Two types of punishments are prescribed. The maximum or the hadd punishment and the lesser punishment of tazir. The maximum punishment of hadd, is stoning to death for married persons and one hundred lashes for unmarried persons. The proof required for hadd is that there be four Muslim adult male witnesses of good repute to the act of penetration or a voluntary confession in a competent court of law. The confession can be retracted at any time before the execution of punishment, in which case it cannot be carried out. With any other type of evidence, including that of women or non-Muslims, hadd cannot be inflicted. The crime is then punishable by tazir, which in the case of zina is imprisonment for a maximum of ten years, thirty lashes and a fine, and for rape is maximum imprisonment of 25 years and 30 lashes. For purposes of punishment, the law draws a distinction between a married person and an unmarried one. An unmarried rapist cannot, therefore, ever get the maximum punishment for rape irrespective of how heinous the offence. Further, even though the hadd punishment can only be awarded to adults, the definition of ‘adults’ under the law may include girls as young as eight, the only criterion being puberty. An adult man is “a person who has attained the age of 18 years” and an adult female “the age of 16 years, or has attained puberty”.

This definition ignores all basic legal principles of protecting children from criminal responsibility before they reach a certain age. The Pakistan Penal Code had protected minor girls by providing that sexual intercourse with a girl under 14, even with consent, would constitute rape. Not only is this immunity not incorporated in the Zina Ordinance, but the Ordinance further reduces it. 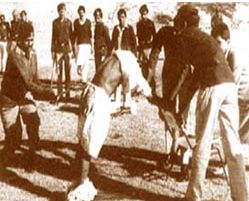 The Zina Ordinance is fraught with legal ambiguities. The major flaw in this law is the fact that no distinction is made between adultery and rape. Rape is considered no more heinous a crime than zina. The demarcation line between the two offences is so thin in practice, that when a woman comes into the court with a case of rape, there is a possibility that she might herself be convicted of zina if she cannot prove the rape. The onus of providing proof in a rape case rests with the woman herself. If she is unable to prove her allegation, bringing the case to court is considered equivalent to a confession of sexual intercourse without lawful marriage.

Over the years, the judgements passed by courts have often overstepped this fine line between the two offences. This definition of zina has led to a series of cases where both women and men have been falsely implicated on the pretext of not being validly married to each other. In the case of void marriages, the cohabitation of couples is taken as a “confession” of zina. The most notorious case is that of Mohammad Sarwar and Shahida Parveen (NLR 1988 (SD) FSC 188. The trial court in this case ruled Shahida and Sarwar’s marriage as being illegal and awarded them the maximum hadd punishment of stoning to death. Shahida had been previously married and claimed to have been divorced before marrying Sarwar. On trial she produced a divorce deed allegedly bearing her ex-husband’s signature. Since Shahida’s divorce had not been registered, the court took the view that the divorce stood invalidated. Therefore, her marriage was considered void and taken to be a confession of zina.

On appeal, her defence counsel argued that the statement made by the accused (that they were married) was not intended as a confession, but as a denial of the charge of zina. Subsequently, the couple was acquitted on re-trial. The principle laid down by the FSC in the case of Mohammad Sarwar and Shahida Parveen was, however, completely ignored in the recent case of Zafran Bibi (PLD 2002 FSC 1), where a woman from Kohat was awarded punishment of stoning to death by a sessions court. The prosecution while instituting the case had alleged that Zafran Bibi had committed adultery with the brother of her husband as a result of which she gave birth to a child when her husband was in jail on murder charges. The district and sessions judge, Kohat, had found the woman guilty of the offence and had sentenced her to death by stoning. Even though the decision of the trial court was reversed by the FSC, the judgement raises alarming legal issues which were believed to have been settled. According to the Maliki school of jurisprudence, the burden of proving Zafran’s lack of consent by “raising alarm or making complaint” was shifted on her.

From decided case law it would seem that the courts require “real resistance” (Bahadur Shah v. The State, PLD 1987 FSC 11) on the part of the complainant. Courts have not accepted that submission does not necessarily mean consent and it has been held (Ubaidullah v. The State, PLD 1983 FSC 11) that “since no violence was found on her body, it could be reasonable to infer that she was a willing party to sexual intercourse.” To prove the offence of rape corroborative evidence is generally required. Such evidence could either be in the nature of marks of violence, medical evidence, or third party testimony. Zafran Bibi’s testimony was accepted by the court since “there was nothing on record to presume that she was a woman of easy virtue.” Proving the lack of consent becomes an arduous task as Pakistani law does not protect the rape victim from attacks on her character. In fact such attacks are permitted under the Qanun-e Shahadat Order 1984, which provides that “when a man is prosecuted for rape or an attempt to ravish, it may be shown that the prosecutrix was of generally immoral character.” Any change to the rape laws would not be complete without reviewing the evidential requirements in rape cases.

Various commissions and committees over the years have advocated the repeal of these laws. In 1997, the Commission of Inquiry for Women headed by Justice (Retd.) Nasir Aslam Zahid recommended that the Hudood Ordinances be repealed and that the repealed provisions of the Pakistan Penal Code 1860, be re-enacted with an amendment to make marital rape an offence and to impose a more severe punishment for rape on a minor wife. Recently the Special Committee to Review the (Enforcement of Hudood) Ordinances, 1979 under the aegis of the National Commission on the Status of Women headed by Justice (Retd.) Majida Rizvi also recommended repeal of the Hudood Ordinances on the basis that “the Hudood Ordinances as enforced, are full of lacunae and anomalies and the enforcement of these has brought about injustice rather than justice, which should be the main purpose of the enforcement of Islamic law.” There is really not much left to debate on the merits of these laws. The only thing missing is the political will to tackle the issue.