Slender, quiet and visibly earnest, Ahmed Hadi was the last person one would suspect of being a terrorist of international dimensions. As it turns out, he has been identified as Gun Gun Rusman Gunawan, one of the kingpins of Indonesia’s Jemmah Islamiyah (JI) terrorist network, with links to Al-Qaeda in Pakistan, and the brother of Hambali, himself a key Al-Qaeda and Jemmah Islamiyah operative, who stands accused of masterminding last year’s bombing in the Indonesian holiday resort of Bali, in which more than 200 people died.

For the past four years he spent as a student at the Abu Bakr Islamic University in Karachi’s Gulshan-e-Iqbal neighbourhood, Gunawan’s identity remained concealed, even after a massive crackdown was launched against Al-Qaeda and Taliban operatives in Pakistan.

Hambali, who reportedly had contacts with Al-Qaeda’s top leaders, Ramzi bin al Shibh and Khalid Sheikh Mohammad, both of whom were apprehended in Pakistan, was arrested in Thailand last month, and is now reportedly being held by US authorities at an undisclosed location.

Gunawan was captured along with 11 other southeast Asian students from his university following his brother’s arrest. The arrests of Gunawan and his colleagues in Karachi were followed by a series of raids less than a kilometre away from the Abu Bakr seminary. Another eight southeast Asian students were arrested from the Jama Darasitul Islamia Madrassa, a seminary run by the Jamaat-ud Da’awa, the political wing of a banned Pakistani Kashmiri militant group of the Lashkar-i-Tayyaba. This connection has compelled investigators to explore Jemmah Islamiyah’s links with Pakistan’s militant groups.

The arrests of the southeast Asian students sent a tremor through Pakistani investigating agencies spearheading the war against terrorism, triggering fears that these students could be the first indicator of a sleeper cell in the country, run by Indonesia’s Jemmah Islamiyah(JI) terrorist network.

Since Islamabad sided with the American-led war on terror after 9/11, Pakistan’s intelligence agencies, with the assistance of FBI and CIA officials, have been hunting down Al-Qaeda and Taliban operatives in Pakistan and its border areas.

Since late 2001, Pakistani security agencies have rounded up around 500 suspected Al-Qaeda fugitives, mostly from Arab and North African countries. But this is the first time Pakistani authorities have found imprints of the Jemmah Islamiyah on Pakistani soil.

“The campaign against terrorism in Pakistan has mainly been against Arabs and Afghans. But now the arrests of suspected southeast Asian terrorist group members is a warning signal for the Pakistanis and Americans fighting terrorism,” says defence analyst, Ikram Sehgal.

“It has been an eye-opener for the investigators — the discovery of how deep-rooted the Al-Qaeda organisation really is. Now their goal should be unearthing every possible link to the Al-Qaeda, whether these (links) are in the shape of Pakistani extremist sympathisers, or foreign militant groups,” he adds.

Pakistan’s security officials are currently grilling Gunawan and his cohorts to uncover alleged links between the Jemmah Islamiyah and Al-Qaeda and their role in Pakistan and Afghanistan. Security officials cautiously say it is too early to conclude that the Jemmah Islamiyah has a firm foothold in Pakistan, but they add that the arrested party members may have indirect ties with Al-Qaeda through members of local jihadi groups. “They are being interrogated about their intentions and what their mission in Pakistan was,” says Pakistan’s Interior Minister, Faisal Saleh Hayat.

Meanwhile, Indonesian and Malaysian diplomats in Pakistan are demanding access to their arrested nationals and are seeking their deportation to their respective home countries. A four-member team of Indonesian investigators has, in fact, arrived in Pakistan and interrogated the arrested Indonesian students, including Gunawan.

Pakistani officials have discussed their findings with the Indonesian investigators, but they maintain the arrested men will be grilled even more extensively before deportation is considered. “We want to ascertain whether this group had any terrorist plans up its sleeves in Pakistan, and whether they had direct or indirect contacts with Al-Qaeda operatives here or abroad,” says a security official. “We expect more arrests.”

Sources say it is suspected that Gunawan was instrumental in channelling funds provided by the Al-Qaeda to the Jemmah Islamiyah.

Gunawan was granted admission to the Abu Bakr Islamic University in 1999. He was among 15,000 students from Muslim countries all over the world who came to Pakistan to study Islamic tenets in Pakistani madrassas during the last decade.

The Abu Bakr Islamic University, founded in 1978, teaches only the Quran, Sunnah (sayings of Holy Prophet Mohammad PBUH, and Arabic. Secular subjects such as science, mathematics and English are not included in the curriculum. At any given time, out of its 500 students, around 200 are foreign nationals, mainly from Thailand, Indonesia, Malaysia and African countries.

Mainly run by Islamic parties belonging to the Deobandi order, Pakistan’s Islamic madrassas have, since the Afghan ‘jihad’ in the 1980s, been considered the breeding ground for young, foreign holy warriors.

During the 11-year rule of General Zia-ul-Haq, foreign students were welcomed to Pakistan and madrassas and their accompanying culture flourished in the country. Zia’s government allotted hundreds of amenity plots for madrassas in a bid to appease Islamists across the globe, who in turn poured hefty funds into the country. Once duly indoctrinated, America’s CIA and Pakistan’s ISI would recruit these students and pack them off to Afghanistan to fight the ‘holy war’ against the communist Soviet invaders. 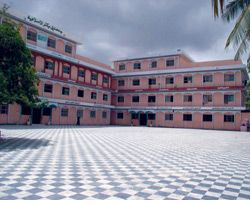 After the withdrawal of the Soviet troops, the Americans walked away, leaving behind the ‘crusaders’ who had fought their war for them. However, the holy warriors found new jihads, and the seminaries kept churning out fodder for these wars as foreign students continued to come to Pakistani madrassas for ideological tutelage.

Many of them obtained training at Al-Qaeda-run terrorist training camps in Afghanistan, and fought alongside Taliban forces during the Islamic militia’s five-year-rule there, which harboured Osama bin Laden. The Taliban movement, in fact, sprang from madrassas in Pakistan and Afghanistan. Several leading Taliban leaders had studied at these madrassas and enjoyed great rapport with Pakistani clerics like the JUI (F)’s Maulana Fazal-ur Rehman, Maulana Sami-ul Haq of Akora Khattak Haqqania madrassa, and Mufti Nizamuddin Shamzai of the Jamia Islamia Binori Town, the two largest seminaries in the country.

Following calls by Taliban leader Mullah Mohammad Omar, the clerics at these seminaries would call on students to participate in ‘jihad’ along with the Taliban forces.

Even after the ouster of the Taliban regime, President Hamid Karzai charged that some madrassas in Balochistan were continuing to preach anti-Kabul propaganda and giving calls for jihad. “There are some madrassas in parts of Balochistan still preaching jihad to Afghan students. They are encouraged to continue fighting instead of opting for peace,” said Karzai.

The clerics at the Abu Bakr seminary say the South Asian students arrested were not involved in militant activities. “We do not give them military training. We provide them a purely Islamic, not extremist education,” said cleric Yaqoob Tahir. “They were students of Islamic teachings, not students of militancy.”

Other students at the seminary are now worried. Seated on the marble floor of the seminary’s main hall, they contend that while their co-students may have ideologically supported Osama bin Laden, the Al-Qaeda, and the Jemmah Islamiyah, they were not members of any Islamic extremist group. “Islam is against terrorism, but it is for jihad against the oppressors of Muslims,” said a young Thai student at the university. And then, more ominously he maintained, “If the Americans and Jews want to conspire against Muslims, we should wage war against them.”

After Pakistan joined the US-led war against terror, Pakistan President General Pervez Musharraf announced several steps to regulate madrassas and stop the inflow of foreign funds to these institutions. Furthermore, Islamabad has chalked out a multi-million dollar plan to encourage madrassas to teach a broader curriculum and bring their students into the mainstream. Additional steps taken by the government include the mandatory registration of foreign students with the Pakistani authorities to enable the latter to monitor their movements.

As a result of these steps, many foreign students have left the country fearing a crackdown, but there are still thousands of others who remain in madrassas supported and run by the fundamentalist extremist parties of the Muttahida Majlis-e-Amal (MMA). These parties fiercely oppose any move against the madrassas. “It is a conspiracy by the Jews and Americans to weaken Islamic institutions as they fear that madrassa students are capable of launching an international Islamic movement against the west,” said Mufti Mohammad Jameel Khan, Rabita Secretary Ulema Council, Pakistan.

There are around 10,000 registered madrassas operating in the country. But other estimates suggest that thousands more are functioning in far-flung villages and towns which remain unregistered. Around 700,000 religious students are enrolled in these madrassas, including some 15,000 foreign Muslim students from the Central Asian states, Australia, EU countries, America, southeast Asia and Africa.

“These young Muslims come from their respective countries with sympathies for the Muslim ummah, but little else. However, the brainwashing at the madrassas they attend turns them into holy warriors,” says an analyst.

According to the analyst, “Al-Qaeda, in the wake of the US actions in Iraq and Afghanistan, is translating the sentiments of Muslims into extremism, and these madrassa students believe that they are torchbearers of Osama bin Laden’s ideology. They are going to prove a big challenge to the US and its key allies in its war against terrorism.”

Pakistan’s intelligence agencies have been monitoring these madrassas in their continuing hunt for Al-Qaeda and Taliban operatives, but despite the recent “big catch” — the Jemmah Islamiyah boys — many within the agencies believe it is just the tip of the iceberg.

The organisation of Al-Qaeda has wheels within wheels. It is like a maze and Pakistani madrassas are believed to be its doorways and a haven for characters like Gunawan. As one foreign madrassa student puts it, “If the west wants to end extremism, it cannot do so by eliminating Osama. It will end only if the west provides justice to the oppressed Muslims of Bosnia, Chechnya and Palestine. Otherwise Muslim movements like the Jemmah Islamiyah will continue to flourish.”