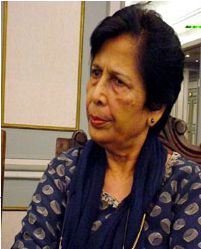 Q: Where do things stand as far as the recommendations of the National Commission on the Status of Women are concerned?

A: The National Commission has recommended the repeal of the Hudood Ordinance. It is a recommendatory body, so it is now up to the government to accept it directly or put the recommendation before parliament.

A: Out of twenty members, only two were for reform — the representatives of the MMA and the CII. The remaining said it should be repealed and we should go back to the older law at present. The government could then redraft the whole thing after going through our report. The draft should be circulated among the public and then let it go to parliament.

Q: What was the old law?

A:The Pakistan Penal Code, rape, abduction, kidnapping, all were governed by the old law. What happened was that they changed the definition of adultery and some other things in the Hudood Ordinances, otherwise many of the provisions are the same as the old law. In the Prohibition Order, which has 33 sections, four are of hadd, the remaining are all of the Penal Code, exactly picked up from the PPC. Similarly in the offences against property, most provisions are from the Penal Code.

Q: What was the change in the case of adultery?

A: Instead of a personal offence, it was made an offence against the state.

Q:It seems that the Islamic Ideology Council and even the MMA are now open to the idea of amendment.

A: We had representatives from the Islamic Ideology Council and the MMA on the Commission and they were the two members who suggested amendment. They admitted that there were weaknesses in the law and said they should be removed. But according to us, there are so many defects that this will not serve the purpose. It will have to be repealed if the government really wants to do something.

Q: Those who oppose repeal claim the Hudood Ordinance conforms to Islamic injunctions.

You can have exceptions to this rule, but they cannot be hadd punishment, because hadd are only Quranic injunctions.

The Prophet (PBUH) was both a prophet and an administrator running a state. As an administrator, if he did allow certain things such as stoning to death — which was prevalent before Islam — then that punishment was given as an exception in a few cases and not as the law. In the holy book of the Jews, stoning to death is mentioned, but not in the Quran.

Q: What about the provisions governing rape and adultery?

A: There is the question about four eye-witnesses in the case of both rape and adultery. How is a woman going to know where and when she is going to be raped? And will the four witnesses stand and look at her? Would any Muslim man like to see people raping a woman by force and not say anything, is our society so barbaric and shameless?

Q:As the law stands, is that the only acceptable evidence in the case of rape?

A: It is in the case of hadd, otherwise the Penal Code applies and hadd punishment cannot be given. If we have to fall back on the Penal Code, then we don’t need the provision for hadd.

Q: Are the zina provisions still being misused to victimise women?

A:Just three days ago, I met women in jail who had been charged under zina. One of them had remarried and her ex-husband had lodged a complaint four years after she left him. As long as the law is there it will be used to pressurise and blackmail.

Q: A previous commission had suggested repeal of the Hudood Ordinances, in 1997. Was there any follow-up at all?

A: I don’t know how much follow-up there was, but that was a short-term commission set up to review a range of laws, including the family, elections etc. We made an in-depth study for over a year, of each and every provision of the law. We had two retired judges, minority lawyers, Hina Jilani and Shehla Zia were members, the chairman of the CII and a representative of the MMA. All the members got together to study the law.

Q: Is there a comparable situation in other Islamic states?

A: Only in Saudi Arabia, nowhere else. In Malaysia, they tried in one state, but that was suspended. There was a punishment awarded recently in Nigeria, but even there the law apples only in certain areas, and this particular punishment was set aside.