“To attain spirituality is to realise that the whole universe is one symphony in which every individual is one note.” Across South Asia, music has always been central to the abundance of rituals performed at the shrines of Sufi saints. In Pakistan it is primarily musical expression, manifested in one form or the other at these very shrines, which displays vividly the vision of Sufis who always emphasised love as being the supreme and most cherished of all human values. Love was known as the deepest emotion that united mankind.

Every day qawwali, wai and kafi are sung, instruments such as the dhol and naqqara are played, while devotees of Sufism break into the dhamal, which is a trance like dance. It was to honour this great artistic expression and form of pure devotion to God, that the Rafi Peer Theatre Workshop started their Sufi Soul Music experience in 2000. Seeing a positive response, this year they have begun the International Mystic Music Festival, which will now be held as an annual event in Pakistan.

The festival was organised at the Al-Hamra, Lahore by the Rafi Peer Theatre in collaboration with Sufi Order International, with an aim to introduce the musical element in Sufism and explore the richness of traditions associated with it, which give a message of peace, love, harmony, tolerance and beauty.

The kalam of the Sufis was rendered by performers who have strong connections with the shrines. Groups from Afghanistan, Iran, Syria and Turkey also participated, which bore testament to the fact that this spiritual activity has spilled over frontiers, geography and politics. It is a universal quest for bringing people together through music.

The subcontinent, primarily Punjab and Sindh, are rich in Sufi heritage and tradition with shrines honouring the poetry, dance and music of the great Sufi mystics who have made lasting contributions in these fields. 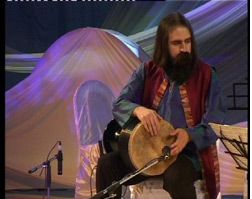 The stage design was breathtaking, with pristine white drapes flowing across in all directions from a dome-like structure positioned in the centre. The dome almost looked like a mosque. The beauty of the atmosphere was enhanced by the sprinkling of yellow and red flower patterns at the front of the stage. The entire ambience symbolised Sufi mysticism.

Nine performances, foreign and local, had the audience captivated on the first day. The festival opened with Najam Sheraz’s ‘Hamd,’ followed by a fiery performance by Goonga and Mitthu malangs on drums. Goonga Sain, with his long hair and overpowering presence on stage, has risen to international fame as a master percussionist. Being both deaf and mute, he started his career on the roads of Lahore as a dholia. The performance included a striking rhythmic journey, enhanced by the ritual dance of Goonga, who spins at a stunning pace while playing the dhol. Sain Zahoor, who recently won the BBC-3 Asia-Pacific Award, also performed at the festival and it was easy to see why his musical and vocal abilities have earned him great acclaim nationally and worldwide.

Iqbal Bahoo’s ‘Heer’ was beautiful and it was his association with Sufi poet Hazrat Sultan Bahoo that earned him the name Bahoo, which he thinks is the greatest honour. Mansoor Malangi who has adopted the unmatched folk legend, the late Tufail Niazi, as his role model, also gave a stunning performance. 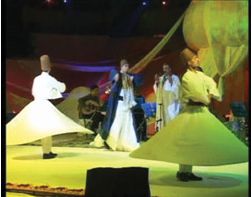 Abida Perveen’s performance was the highlight of the second day as she sang with her customary verve for almost two hours. She drove the audience wild with her famous ‘Lal Meri’ version, which brought people to their feet. The Turkish group called Galata Mevlevi Music & Sema Ensemble gave a mystic ritual-like performance, which goes back to the 13th century. Their instruments comprise a violin (kemence), an open longitudinal bamboo flute (ney) and the tambourine (def). The naa’t starts the ceremony. The Sema ceremony signifies man’s spiritual journey to heaven. It is his uniting with Allah, leaving his own self behind, rising with love; and his return to serve all of God’s creations with renewed understanding and love. The semazen, while standing with his arms crossed, depicts the figure “one,” thereby signifying the unity of God in the beginning. He stretches out his arms as he starts whirling, his right hand extended to the sky as if praying and ready to receive the Kerem-i-illahi — God’s word — while his left hand at which he looks is turned so that his palm faces the ground. This signifies his forwarding to the people the spiritual ilm he receives from God. Rotating counter-clockwise around his heart, he embraces all human beings and all creatures with love.

The Afghan Sufi Ensemble performing on the last day of the festival stole the show with Afghani singers Ustad Wali Muhammad and Ustad Ghulam Hussain doing a great job. Ustad Hussain Bukhsh Gulloo’s light classical music was a delight to listen to and spoke volumes of his skill and the quality of his voice. Popular Pashto singer Zarsangha sang catchy and lively regional folk songs that entertained the audience immensely. Rizwan Moazzam, who belongs to Nusrat Fateh Ali Khan’s legendary family, mesmerised the audience with pieces of Sufi poetry by Bulleh Shah, Rumi and Ameer Khusro.

An international Sufi conference on ‘Universalism and Islam’ was also held during the festival on April 15, featuring speakers Reza Shah Kazemi from the UK, Cemalnur Sargut from Turkey, Sheikh Harun Rashid Faye from Senegal, Imam Salim Chisti from the US, Maryum Kabeer Faye from the US, Yoginder Sikand from the US, Muzzaffar Ali from India and Javed Ahmed Ghamidi from Pakistan. The speakers addressed various issues related to the philosophy of Universalism as well as the manner in which the Holy Prophet [PBUH] saw Islam as a religion of universal value, which commanded its believers to live in peace with others as well as among themselves.

The first International Mystic Music Festival was a roaring success with jampacked audiences in attendance every night. The event was painstakingly organised by Rafi Peer Theatre, who outdid themselves once again. There was no untoward incident reported, although the festival was open to the general public, with free entry. Security was tight and youngsters had been recruited to manage the event and keep things running smoothly.

The excellent turnout proved that Lahore has an abundance of Sufi music fans. The foreign participants loved performing at Lahore and enjoyed the audience’s response. The festival helped to inform our people about the essence of Sufism and give them an idea of the true spirit and teachings of Islam.