A decade of growth, stability, and continuity,” is how close confidants of Pakistan’s President Pervez Musharraf, describe the ruling General’s stint in power. But the phrase is misleading. The starting point of the 10-year clock is not October 1999, when General Musharraf’s corps commanders overthrew Prime Minister Nawaz Sharif’s government and set off the third phase of military rule in the country. The ten-year timeline is set to begin after next year’s elections. Put simply, President Musharraf’s close circles are confident that he will stick around in power till 2015.

That is real long-term planning, especially in a country where the average political life-span of civilian governments is three years and where even steel-solid military rulers rust away, at the most, after a decade. President Musharraf, it seems, wants to over-ride the Pakistani law of survival averages.

“The country needs stability. It needs a strong leader who can sustain economic growth, build strong defences, deal with the international community on the basis of a strong track-record of diplomatic performance and, above all, nurture a reform process whose sapling has started to take root,” says a member of the federal cabinet. “This requires the continuation of President Musharraf’s rule, strengthened by a national party like the Pakistan Muslim League. The prime ministers can change, even the party presidents can change, but the lynchpin — General Musharraf — should hold on for another decade at least.”

Sounds like wishful thinking from a politician whose future is tied to the khaki strings of the President. However, insiders say that serious work is underway by the President’s political planners to ensure that General Musharraf stays unassailable in power for at least a decade.

The first hurdle to cross is the upcoming election in 2007. President Musharraf, typically, has asked his political supporters to debate whether he should stay in or take off his uniform to ensure smooth sailing during this turbulent period. One of the many options that his supporters are looking into is a President without the uniform lording over the parliament born of the coming elections.

“President Musharraf,” says one member of the ruling party, “favours retaining the uniform, but he has not closed the doors on other possibilities, one of which is that he takes off his uniform and then continues as a civilian President.”

Counting the benefits of this course, an office-bearer of the Pakistan Muslim League said that this would neutralise the only pressure point which the opposition is using to find fault with the present system. “The issue for them (the opposition), is the uniform, which is an anomaly according to the President himself. If that is sorted out, there is no reason left for anyone to point fingers at the legitimacy of the present system. Or call into question the results of elections that the President will supervise. It is a win-win situation.”

This option presupposes that General Pervez Musharraf has come round to the idea of living without the uniform, and that he would allow for another Chief of Army Staff in October 2007, when his second, self-extended, term as army chief ends.

However, there is no shortage among General Musharraf’s courtiers who see a ‘uniform-less’ President as a bad idea. “Keep it,” is their strong submission, at least until the results of the next elections are out and the new setup is in place. 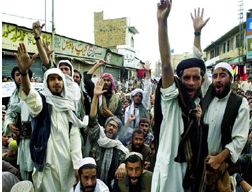 Mostly belonging to Sherpao and the Patriots group of the People’s Party, these uniform-worshippers propose that the elections to the new parliament be announced in the first quarter of next year. The reason for this is simple: General Musharraf’s tenure as Chief of Army Staff ends in October 2007, whereas the assembly completes its term a month later. He will either have to give himself another three-year term or supervise the next elections without the uniform. Their solution: call in early elections. .

“The President should get an endorsement from the next parliament wearing the uniform and then decide the time to take it off whenever he deems fit. Leaving his post as the country’s army chief closer to the elections is fraught with complications, which should be avoided”, says a member of the Pakistan Peoples Party Patriots.

Unquestioning loyalty being the mother of ingenuity, a group within the Pakistan Muslim League, backed by the help of constitutional experts advising General Musharraf, is of the opinion that the whole debate about the choices before the President is redundant. Members of the group believe that General Musharraf’s tenure as President of Pakistan starts from the day he took the vote of confidence after signing the 17th Amendment, on December 31, 2003.

“Our interpretation of the clauses relating to the President’s tenure is that the parliament that passed the 17th Amendment by a two-thirds majority also endorsed him as the President of Pakistan and that too in uniform. By that token he stays in his present position till December 2008. There is no need for him to take a fresh vote of confidence or to give himself an extension as Chief of Army Staff before this date”, says a legal advisor to General Pervez Musharraf. Even some opposition members privately endorse this interpretation of the 17th Amendment.

“We had pointed out this flaw to the MMA, which signed a pact with the government on this score, but our advice was ignored. Then the clerics thought that they had beaten the General down to a deal on the uniform, whereas in fact that had given him a new lease of life,” says a member of the Pakistan Peoples Party Parliamentarians.

But perhaps the MMA could be forgiven for believing that they had got General Musharraf to agree to relinquish the office of Chief of Army Staff. After the agreement, the President appeared on Pakistan Television and categorically stated that he would not be in uniform beyond 2004. “After giving it serious thought, I have decided to give up my uniform before December 31, 2004 in the interest of creating political harmony in the country. I will select the date myself within this period”, said the General. A year later, in December 2004, still wearing his uniform, he said, “Now the situation is entirely different from December 2003 when I had announced relinquishing charge of the army post with certain hopes and expectations. There is no mention of vacating the presidency or the COAS office in the accord with the MMA or in the 17th Amendment.” 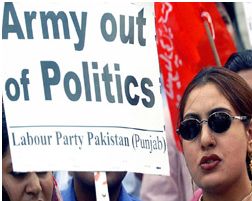 However, the two clauses of the agreement, finalised and signed by Chaudhary Shujaat Hussain and Senator S.M Zafar from the government’s side and Maulana Fazlur Rehman, Liaquat Baloch and Hafiz Hussain Ahmad from the MMA, on December 24, 2003, clearly talked about endorsing the “present term of the President”, which ends in 2007.

Outside observers of Pakistan’s political scene too subscribe to the same impression. A western diplomat said, “Our assessment (in the wake of the 17th Amendment), was that General Musharraf’s present tenure would co-terminate with that of the present assemblies in November 2007. He, of course, could get elected again and being the President could create an exception for himself by continuing for another three years as Chief of Army Staff. This is how we saw it then.”

Now this new interpretation of the 17th Amendment suggesting that the President began his fresh term from end-2003 has become crucial to the future political set-up of the country. If this is the guiding principle of General Musharraf’s political moves, he faces no real challenge to his twin tenures as President and Chief of Army Staff, which will effectively outlive the present assemblies by a year.

However, even then this buys Musharraf just a couple of years in power and these too would potentially be racked by increasing pressure from the opposition.

The General’s men, however, have a range of political manoeuvers to cement his authority. “We have to win a two-thirds majority in the assembly, that is a must. In the next term (2007), we do not want to be heckled by petty partners and coalition burdens. The Pakistan Muslim League has to command an unbeatable political victory in the coming elections and lend a strong hand to President Musharraf,” says a member of the ruling party group, who has sat in on at least three meetings of party leaders with the General. He candidly says that the President has categorically asked them to ensure that the party performs at its “optimal best”. This advice has been taken in the spirit of a scripture. The Pakistan Muslim League has already gone on both spending and shopping sprees.

The League is already shopping for political loyalties, luring away members of their nettlesome partners in power, the Peoples Party Patriots. Aftab Sherpao has been tasked to focus on beating the MMA into a bland pulp in the NWFP-an effort which, if fruitful, can get him to head the provincial government after the next elections. Amir Muqam, the provincial head of the Pakistan Muslim League, along with the immensely resourceful trio of Senator Gulzar and his two sons, Waqar and Amar, also in the Senate, are to supplant the effort to defeat the religious alliance. Arbab Ghulam Rahim in Sindh has been asked to deliver a “local-bodies-elections-like-result” in the coming electoral battle, giving the Peoples Party just enough breathing space to counter the need for total reliance on the Muttahida Qaumi Movement. In Balochistan, besides the Pakistan Muslim League, Maulana Fazlur Rehman’s Jamiat Ulema Islam (JUI), is being urged and supported to counter and neutralise the growing political influence of the nationalists.

In other words, all the General’s men have been put to work to win favourable numbers in the upcoming elections.

“This is all about continuity of policies. Only President Musharraf can ensure that. Once we have the required strength (in the assemblies), he does not have to bother about procedural hindrances in governing Pakistan. With a two-thirds-majority, even the constitution can be amended,” said a vice-president of the Pakistan Muslim League, who unabashedly added that law, constitution, elections — everything — is subject to the national interest — which in the present case means President Musharraf staying in power.

This inescapability of General Musharraf’s indispensability to the country is disturbing, but understandable. The General himself believes that he is the only one holding Pakistan together. In 2004, writing in a local magazine, he said, “I visualise Pakistan as a strong, high-performing economy… over the next decade. I would like to see the continuation of the present stable macro-economic environment and an educated and healthier Pakistani (sic) contributing effectively to achieving higher economic growth. I would like to see the benefits of macro-economic gains passed on to the common man. Lastly, I would like to see Pakistan living with honour, dignity and respect amongst the nations of the world.”

It seems he meant every word of it, particularly the part about “over the next decade.”