Pakistan edged closer to a full state of emergency with the imposition of strict controls on newspapers and television in an attempt to contain anti-government protests. Under a new draconian law, the TV networks have been ordered to stop live news coverage and suspend political shows. Coverage of demonstrations against the government and any criticism of the armed forces are banned. Violation of the new regulations can result in heavy fines and even imprisonment of editors and the owners of media companies. The gagging of the independent media is yet another attempt by President Musharraf to silence his critics

There are clear signs that the general is fumbling as he paints himself into a corner. A pledge of support from the army’s top brass may not be of much help to him in the face of mounting mass opposition. The clampdown on the electronic media appears to be an act of desperation as the general’s vulnerability increases.

It seems highly unlikely that the present political order can survive the challenges it now faces, both constitutional and political.

General Musharraf’s room for manoeuvre has become even narrower with the widening cracks in the ranks of his civilian allies. Few in the government are willing to defend his ill-fated action against the chief justice and the violence unleashed by the MQM in Karachi. The government is increasingly resorting to coercive measures with the unravelling of the entire political edifice. Even as the corps commanders endorse their chief, the growing political crisis is ushering in what many analysts believe is a possible endgame for the general. Many Pakistanis recall a similar statement from the military commanders, pledging support for Zulfikar Ali Bhutto, just a week before they ousted him from power. With the military now itself in the line of public fire, the parallel is foreboding. General Musharraf’s backing of those responsible for the violence and killing of opposition workers in Karachi has completely destroyed his legitimacy, and dashed all hopes of him muddling through the deep waters. There is little doubt now that the riots were deliberately fomented to silence the protest.

But this action has had the opposite effect: it has increased the pressure on General Musharraf immensely and galvanised the opposition parties. The May 12 events have given a whole new turn to the ongoing demonstrations against the removal of Pakistan’s chief justice, Iftikhar Mohammed Chaudhry. What had started out as a peaceful protest for the independence of the judiciary has been transformed into an impressive pro-democracy movement. It is now quite apparent that the MQM’s move to counter the chief justice’s rally in Karachi was sanctioned by the president himself, against the advice of some of his aides and the ruling Pakistan Muslim League(Q) leaders. The city was left to the mercy of armed marauders, while the police and the Rangers stood on the sidelines. As Pakistan’s largest city was drowned in a bloodbath, the general raised his fists at a public rally in Islamabad, declaring victory. It is not surprising that he has refused to order an independent judicial inquiry into the incident, which resulted in the death of 42 people, and raised the spectre of Pakistan’s economic jugular plunging back into an ethnic strife. It was, however, because of the maturity of the movement that the catastrophe was averted.

The MQM’s role in the Karachi violence indicates the party’s return to its militant past, with the blessings of the military rulers. Over the last five years, the group had tried to build its image as a mainstream, secular democratic party. It had expanded its network to other parts of the country, shedding its ethnic colour. But the day-long mayhem, with its gun-toting militants on a killing spree, completely wiped out that effort and returned the MQM to a pariah status. The more saner elements in the party privately acknowledge the political damage caused by the May 12 incident. The party was forced to close down its offices because of fear of retaliation. The incident has also increased the pressure on the British government to check Altaf Hussain’s activities.

The MQM supremo, who fled to Britain in 1992 to escape reprisal by the army, has acquired British nationality, but continues to lead his devotees from his headquarters in northwest London. According to British government sources, the MQM leader has been placed under surveillance. It is certainly not good news for a party which has stood by General Musharraf through the worst crisis he has faced since seizing power in a bloodless coup in 1999.

General Musharraf now stands isolated. The May 12 events have been a major blow to whatever was left of the government’s legitimacy. There are now widespread demands for Musharraf to hang up his uniform and give up power. Hedging his bets on the support of the military and the continued embrace of Washington, the president has refused to bow out. Instead, he has decided to use coercion to suppress dissent. The restrictions on private TV channels to air live programmes and talk shows are just the beginning. There is a strong indication of the government imposing a state of emergency to prevent protests and political rallies. “The option is very much on the cards,” says a senior government official. Most analysts agree that such a desperate measure would only aggravate the situation. Any attempt to use the brute force of the state would have disastrous consequences and block the possibility of a peaceful political transition. 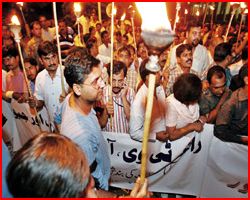 It is a crisis of legitimacy, and it is distinguished by the fact that the protests are entirely secular and democratic in their character. In recent years, the major protests in Pakistan have been whipped up by Islamic parties, driving crowds on to the streets to demonstrate against the government on questions of faith. But the crisis over the courts has been totally spontaneous — a reaction not just to the removal of Justice Chaudhry, but also to the manner of it. People were really angered by the sight of the chief justice being hauled up before five or six generals, who questioned him for hours, intimidating him in their uniforms. General Musharraf is seen to have attacked whatever remained of Pakistan’s judicial independence. It’s not that the courts were entirely independent: in 2000, five Supreme Court judges refused to renew their oaths of office to serve under the military government, and the country’s chief justice was replaced. It is now quite apparent that the present chief justice was not removed on perceived charges of misconduct, but because of the fear that he could create an obstacle in Musharraf’s plans to run for re-election later this year. The general has already hinted that he intends to stay in office, and will need a constitutional amendment to allow him to continue to serve as both the country’s president and the chief of army staff. The argument over this amendment will end up in the Supreme Court.

The legal side of this confrontation continues to make its way through the courts, but the protest movement has acquired such momentum now that the Supreme Court will find it very hard to uphold the government’s argument. Everyone believes that the complaint against Justice Chaudhry should not stand, and if the court were to rule against him, the people would not accept the verdict. For the first time in Pakistan’s history, the legal fraternity has stood up to a military government. The Sindh High Court’s decision to conduct an enquiry into the May 12 incident has further escalated the prevailing tension between the government and the judiciary.

In an attempt to shore up their dwindling authority, the military establishment has revived its efforts to bring the Pakistan People’s Party (PPP) on board. Some of Musharraf’s close aides believe a compromise with Benazir Bhutto could provide the best hope to salvage the situation. Worried by the developments in Pakistan, Washington is also pressing the two sides to thrash out some sort of power-sharing arrangement that would also help keep the Islamists at bay. That is probably the reason why the PPP is taking a cautious path, as the political movement gains momentum. According to highly placed sources, the back-channel negotiations, which had stalled after the May 12 incident, have been revived.

The two sides came very close to an agreement in April, when Benazir Bhutto declared that she was willing to work with Musharraf in the “national interest.” The deal would have allowed Bhutto, who has been living in exile in Dubai and London for the past 10 years, to return to Pakistan to campaign for her party in the parliamentary elections by the end of the year. In case the two sides had cut a deal, Musharraf would have promised a free and fair election, paving the way for the PPP to emerge as a major partner in the government. But the May 12 carnage has made it extremely difficult for any opposition party to reach an accommodation with General Musharraf.

Musharraf’s problems have been compounded by the increasing belligerence of the Islamists, who are trying to assert their position. The worsening law and order situation in the country, with growing incidents of suicide bombing allegedly involving Islamic militants, has added to his woes. The increasing incidents of suicide bombings in the North West Frontier Province are a grim reminder of the war in Afghanistan spilling over into Pakistan. General Musharraf’s stock as a trusted ally of the US in its war on terror also seems to be running low and questions are being raised about his performance in curbing Islamic extremism and militancy.

The country is rent asunder by the current crisis, and the only way out of the current situation is for the president to reconcile himself to the prospect of holding a free and fair election. Prolonged instability could also open the possibility of army intervention. Pakistan’s generals have benefited greatly from this regime, but such is the public anger against Musharraf that they may soon come to realise that he is becoming more of a liability to the military establishment, and decide to abandon him.