“We are witnessing the end of Musharraf’s dictatorship”

Q: How do you view the present judicial crisis in the country, and do you see a way out of it? 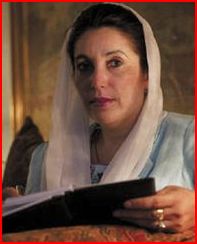 A: The alliance between the military and the judiciary is falling apart. This alliance began in 1977, with the coup of General Zia. It seems the judiciary has had enough of the military establishment removing its members. The removal of the Chief Justice of Pakistan (CJP) on charges of corruption has acted as a catalyst to trigger widespread unrest. It seems to me that we are witnessing the end of the Musharraf dictatorship.

General Musharraf could have nipped the crisis in the bud by re-instating the CJP. But now, it may be too late. It’s best for the regime to call a round table conference of all political leaders, including the exiled prime ministers, to evolve a consensus for transparent elections under a government of national consensus and an independent election commission.

Q: People are speculating that if the judicial crisis persists, it could break up the country. Do you foresee such a grim scenario?

A: Unless there is a political solution to the present crisis, there could be anarchy and chaos. It is unlikely that the international community or the armed forces will continue to back the present regime if domestic protests continue to escalate. The only option for General Musharraf and his regime is to seek a political solution through a negotiated transfer of power.

Q: The Pakistani press has been filled with stories of your back-door deal with General Musharraf. In fact, in one of your recent interviews you have even hinted that you are talking to General Musharraf in the larger interest of the country. However, in the aftermath of March 12, are the negotiations still continuing?

A: It is inappropriate to talk of back-channel contacts against the background of the Karachi killings that resulted in 42 deaths on May 12, 2007 .

Q: Is there any truth in the reports that Musharraf spoke to you personally over the phone?

Q: What are the contours of the expected deal?

A:The PPP has never said there was a deal.

Q: Suppose you do cut a deal with Musharraf, where would that leave Nawaz Sharif and the Charter of Democracy? Also, wouldn’t it dent the credibility of the PPP?

A: The question is redundant as the PPP has never said that it has entered into a deal, although it has admitted to contacts. The PPP is the only major party to have stuck to its principles and not cut a deal with a uniformed president. [Consequently] its leadership and workers have paid a high price.

Q: There are also some reports in the local media suggesting that you and your party have agreed to help Musharraf get himself re-elected as president. Is this true?

A: The PPP is on record that it would not vote for a uniformed president.

Q: Is there any rule to rein in those who violate ARD’s Charter of Democracy (CoD) to which you are signatory?

A:The CoD is a legislative reforms package to strengthen democracy. It is a commitment by both major parties to legislate laws to create a just and democratic society, irrespective of who wins the elections. The CoD supports democracy and supports steps that can facilitate the transfer of power to a truly representative government.

Q: But Nawaz Sharif, a co-signatory to the Charter of Democracy, maintains that anybody who is negotiating with the general or generals is a traitor. Would you comment?

Q: It has often been said that you are not acceptable to the Pakistani army; they want Pakistan Peoples Party minus BB. Apparently PPP’s Makhdoom Amin Fahim was offered the prime ministership in the last elections. Would such an offer be acceptable to you this time round?

A: Since 1977, military hardliners have tried to hijack the PPP with a minus Bhutto formula. I first heard it when the Quaid-e- Awam was arrested in 1977, thirty years ago. The hardliners fear the popular appeal of Zulfikar Ali Bhutto and his daughter, who are symbols of moderation, democracy, tolerance and empowerment of the people. They see in our leadership of the PPP, a continuation of Quaid-e-Azam’s vision of a secular Pakistan . They consider us a threat to religious dictatorship and theocracy. Naturally, they will try to eliminate this threat by removing our leadership and seeking to hijack the PPP.

They did not succeed in the past and they won’t succeed now.

Q: Would you agree that the country’s opposition is in total disarray and, hence, ineffective? Apparently one of the obstacles that stands in the way of putting up a joint front is your refusal to sit with the religious parties?

A: The opposition has been extremely effective, given the obstacles in its path. PPP got the largest number of votes in 2002. According to the IRI Gallup poll, it is the most popular party in the country as of 2007.

I do not agree with the assessment that the country can only be saved when the moderate forces join up with the religious parties. There are serious issues concerning the religious parties, including their support for the L.F.O, a uniformed president, the ban on twice-elected prime ministers seeking a third term, participation in the present regime and expansion of militants and extremists in Tank, Bannu, Swat and other areas.

The opposition is united on the reinstatement of the CJP, as well as the holding of fair and free elections, although the democratic opposition and the MMA are waging the struggle from their respective platforms.

Q: Pakistan is confronted with grave problems, among them the growth of religious extremism in general and the major threat that extremist groups, such as the Al Qaeda and the Taliban, pose to the writ of the state. How would your approach to these problems differ from that of General Musharraf?

A: Dictatorships by their nature are unrepresentative as they neglect the social needs of the people. The political madrassas exploit the neglect of governance, offering food, clothing, shelter and education to the children of the poor. They then brainwash these students and use them as fodder in their grand design to dismantle the state by infiltrating key institutions, establishing terror groups and a parallel state structure. Through democracy we can address the basic needs of the people, involve them as participants in planning and restore the authority of the government.

Q: Deal or no deal, are you still planning to return to the country? And if yes, when?

A: I plan to return this year.

Q:The present regime is most likely to rig the forthcoming elections, as they did the last time. How do you plan to deal with such a scenario?

A: The PPP and its allies are mobilising public opinion to ensure free and fair elections and a level playing field for all political parties and leaders. If elections are rigged, all political parties will unite and the protests will increase. The Orange Revolution in Ukraine is a good example of how people, who are robbed of their right to vote, can protest and put an end to dictatorship.

Q: Who would you hold responsible for the massacre of innocent people on May 12 in Karachi ?

A: There is a widespread perception that the military regime handed over Karachi to the MQM on May 12. Suspected MQM terrorists ambushed the procession that was going to the Karachi Airport to receive the chief justice. The police had been disarmed.

Q: Do you feel the MQM has changed — or has the capacity to change?

A: The MQM was reportedly created by General Zia’s intelligence in the eighties as a counter to the moderate PPP in Karachi . The MQM espouses moderate policies. However, it joins up with military dictatorships and destabilises civilian and democratic governments. It played a role in destabilising the governments of Junejo and the first governments of PPP and the PML (N) in the nineties.

Q: If it is the same “fascist” organisation that it was reputed to be earlier, how are you going to deal with it in the future?

A:It’s never easy dealing with terrorists, but it must be done through a mixture of political, economic and administrative means. It is a positive development that for the first time Karachi has whole-heartedly rejected the MQM following the events of May 12.

Q: In the revised edition of your book, Daughter of the East, you write that General Musharraf had leanings towards the MQM. Do you still hold that view?

A: I have said what I wanted to say in the book.

Q: There is a clause in Pakistan’s constitution which stipulates that you cannot become PM twice. Are you willing to nominate somebody else?

A: The ban on a twice-elected prime minister contesting a third time can be lifted by the parliament.

Q: And one last question. The army has opened several fronts in Balochistan, Waziristan and Afghanistan and is also involved in the US war on terror. Any government that comes to power will have to contend with these battles. How do you propose to fight all these battles without the support of the army?

A: The army will support the restoration of stability and efforts to save the country. The army supported PPP’s rapprochement with Baloch leaders in 1988, the efforts to tackle drug barons and militants in the tribal areas in 1988 and 1993, as well as efforts to restore peace in Karachi between 1993-1996.

Of course, the efforts of the political government can be more successful and quicker if the 8th Amendment is repealed and the people give a big mandate to the PPP. I would like to see a PPP government get one chance to govern with the same strength at the centre and the provinces, as those given twice to PML (N) and to General Musharraf since 1999.

But it’s up to the people to decide who they want to elect. The PPP and I are in this for the people. We want to give them back their democratic rights, as well as provide employment, education and energy. We want to use foreign aid to alleviate poverty and take our country into a bright future full of opportunities with freedom, peace and security. We can do this by tackling terrorism and lifting the shadow of extremism.