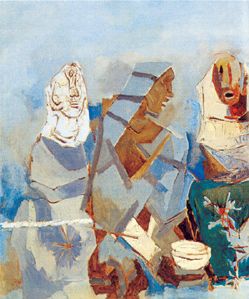 It is common knowledge that the Indian economy has been experiencing a massive boom, with the stock exchange scaling new heights every few months, property prices rising and real estate in Bombay being valued higher than real estate in New York and Tokyo. However, what is less well known is the fact that the rise in prices of Indian contemporary art exceeds by far the performance of the stock market and certainly the increase in property prices. To get an idea of the staggering increase in prices one has to simply flip through the 1997 Sotheby’s catalogue, which prices paintings by M.F. Husain and F.N. Souza at 15,000 — 30,000 US dollars, with the exceptional ones hitting 40,000 US dollars. The same paintings came up for resale at auctions in mid-2005 and were evaluated at 30 to 40 times the prices listed in 1997.

This phenomenon has attracted the big hitters in the business world in India, especially those traders and industrialists operating from London, New York and elsewhere in the USA, who find that buying art enables them not only to flaunt a one-crore rupee painting above the sofa in their living room, but also helps them to profit at a level they cannot hope to do through the stock market or their own businesses.

In an article on Indian contemporary art in The Observer newspaper of London recently, the artist Krishen Khanna commented: “The major stimulus to all this has been the non-resident Indians who are a homesick lot, and who want a bit of their motherland to hang in their homes,” and a gallery owner, Arun Vadhera, who is also planning a sale of about 30 Picassos — prints and originals — stated, “People are spending millions on weddings. I think they are ready to spend that much on art.”

An Indian cancer specialist from Pennsylvania bought a Padamsee painting at Christie’s for 400,000 US dollars and then proceeded to contact me for Souza and Husain’s works. 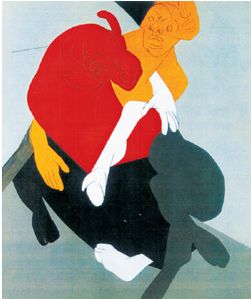 Sales of European and American art of both, the Old and Modern Masters, has been a regular occurrence at the main auction houses for at least a couple of centuries, but the increase in the prices of this work has been gradual and nowhere near the speed at which the value of Indian and South East Asian art has risen.

Who, then, are the big draws in the Indian art world?

The well known ones are, of course, M.F. Husain who is now 91, S.H. Raza, F.N. Souza, Tyeb Mehta, Ram Kumar, Akbar Padamsee, Ganesh Pyne and Anjolie Ela Menon. Of the younger artists it is C. Mazumdar, Atul Dodiya and Arpita Singh whose work is being sought by buyers. Three to four years ago, art collectors could buy their work for approximately 5,000-10,000. Now their prices have shot up to 150,000 US dollars and upwards. For those wishing to dip their toes into the Indian art market, the best places would be the major galleries like Vadehra Art in New Delhi and the Pundole Gallery in Bombay, or the online auction site, saffronart.com, which has been a phenomenal success. Apart from the galleries, it is the three auction houses of Sotheby’s, Christie’s and Bonhams which rule the roost, both through their auction sales in London as well as in New York.

At a recent auction at Christie’s, Tyeb Mehta’s ‘Mahisasura’ sold for 1.584 million, five times the auction record. The buyer was an Indian expat. 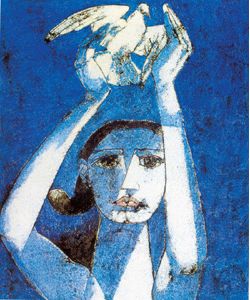 Given the soaring prices of Indian art, the real question here is, why is Pakistani contemporary art selling at much lower prices than its Indian equivalent? The greater buying power of the average Indian businessman compared to his Pakistani counterpart is a factor, in addition to the fact that the Indian art scene is more established. The number of Indian professional artists of repute is between 50 to 100 whereas Pakistan has between 10 to 15. Incidentally, Indian painter F.N. Souza’s work is presently being exhibited at the Tate in London. This is the first time in the gallery’s history that an artist from the subcontinent has been given a solo.

One Pakistani artist who is making waves in the west is miniaturist Shazia Sikander. She has held successful solo exhibitions in several galleries in the US, including Gallery Sikkema and the Whitney Museum in New York. But it will take a while before her work makes it to the auctions abroad.

Contemporary art in Pakistan has only very recently been recognised as an investment vehicle, as opposed to simply a piece of art that serves to grace the interior of a house. It also has to be borne in mind that the real catalyst for the commercialisation of Indian contemporary art in recent years are people like Chester Herwitz, an American of Jewish origin who collected thousands of works of Indian contemporary art, starting 1960 onwards. When he died in 1995, this collection came into the auction market and acted as a tremendous impetus to reviving and enlivening the Indian art scene. Apart from a few people, Pakistan has not cultivated too many serious collectors, and even the present collectors hardly ever sell their works. An exception is Farida Ataullah, who has sold more than two dozen works of Sadequain through Bonhams, and more recently Najmi Sura, who has disposed off several of Jamil Naqsh’s works. The couple now seem to have moved base to London.

So will the bubble of the Indian art market soon burst?

Although there has, undoubtedly, been some overheating in the art market, most dealers predict that the better pieces of art by recognised top painters will probably hold their prices through turbulent times, even after the present madness subsides.