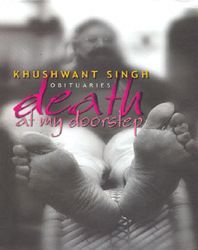 Death is a morbid word. At least to some or, perhaps, to all of us. But its inevitability overpowers all notions about one’s existence. Even more than life itself. Thus, Khushwant Singh’s book of obituaries, Death At My Doorstep, should not be viewed as something that is intended to get one’s spirits down in the dumps, but as an attempt to show that death is something that will get us all in the end. So, why be afraid of the big, bad Grim Reaper?

Death was compiled earlier this year. But, apart from Part 1, in which the writer shares his own thoughts about death and dying, it has been ‘written’ over a large span of time and most of the obituaries have been collected from Singh’s considerable body of writings in various magazines and newspapers.

The result is definetely a good read, as one would expect from a writer of Singh’s calibre. For the uninitiated, he is, perhaps, one of the best known and more controversial of all Indian writers. Singh, now 90, probably felt the time was ‘ripe’ for publishing a collection of his obituaries.

It would give him the opportunity to “spell out my views on death and dying which I felt was appropriate for a man in his 90s — besides other people’s obituaries, I could also write my own.”

Unfortunately, for one who has been an unabashed and almost diehard fan of the feisty Sardar, the overall impact of the book is akin to experiencing an encounter with a damp squib. One would not fully agree with his choice of ‘celebrity obituaries.’ Moreover, in spite of making it clear at several junctures that he doesn’t hold a personal bias, Singh is quite cruel and vicious in his assessments of several people.

Among them is the Pakistani General Tikka Khan, about whom he writes: “He, (Singh’s friend Manzur Qadir), assured Tikka Khan that I bore no ill will towards Pakistan and I would faithfully report what he had to say about his role in the uprising in what was to become Bangladesh.” Yet, he goes on to blow the General to smithereens, albeit in his disarming and charming style, and assures the readers that Tikka was indeed the blood-thirsty ‘Butcher of Bangladesh’ as has been assumed over the years.

Singh’s book contains 35 obituaries. Four of the people profiled are Pakistanis — apart from Tikka Khan, there’s Manzur Qadir, the writer’s closest friend of many years, a brilliant lawyer and later foreign minister and chief justice of Pakistan. Of course, there are the inevitables: Zulfikar Ali Bhutto and Faiz Ahmed Faiz. In Bhutto’s case, the description of his last days and hours is gleaned from second-hand information. Incidentally, Singh was in Rawalpindi at the time of the political leader’s hanging.

Singh’s obituaries range from the brilliant to the ordinary, from the most exciting to the most mundane and, from the sublime to the ridiculous. The writer’s in-built arrogance shows through in the choice of some unknown entities among the dead — and his family’s favourite dog, Simba, also gets a special write-up at the end. The last lines are poignant enough though: “If I had to talk of my close friendships, Simba would be amongst the top in my list. We never kept another dog. One can’t replace friends.” However, while you may disagree with Singh’s choice of subjects, that should not be used as a yardstick to gauge the author’s level of excellence.

Singh’s representative piece, keeping in view his penchant for delving into the risque side of life, is the one on Amrita Shergil, subtitled ‘Femme Fatale.’ Not to be confused with the recently deceased Amrita Pritam, the darling of classic Punjabi poetry, Amrita Shergil was a female colossus in her own right. Singh cuts her down to size, but without undermining the effect that she had on a charming era, when art and culture flourished relentlessly in undivided India.

“A woman with the kind of reputation Amrita enjoyed drew men towards her like iron filings to a magnet.” Yet, he was not particularly impressed by her: “Short, sallow-complexioned, black hair severely parted in the middle, thick sensual lips covered in bright red lipstick, stubby nose with blackheads visible. She was passably good looking, but by no means a beauty.”

But Singh was not oblivious to Amrita’s famous charm. Reacting to a remark his wife uttered about the lady, Amrita had retorted: “I will teach that bloody woman a lesson she won’t forget; I will seduce her husband.” There’s a kind of longing in Singh’s take on this threat. “I eagerly awaited the day of seduction. It never came.”

Although in Faiz’s words, Singh believes that “life is like a beggar’s cloak full of patches of pain sewn on it,” his book of obituaries emerges not as an ode to death but as a celebration of life. This may seem quite odd to the average reader, but to those who are familiar with Singh’s persona and writings, probably that is exactly what he intended to do in the first place.