“We can topple the government any time,” boasted a senior MMA leader after a huge anti-war rally in Peshawar. Bold and daring words inspired by what was, perhaps, the biggest of the “million man” marches organised by the Islamic alliance across the country to protest aagainst the American aggression in Iraq. In a sight rarely seen in Pakistan, thousands of protestors thronged to the rally venting their anger against Bush as well as General Musharraf. “Down with Bush” and “Down with Musharraf” were the most common slogans. The unprecedented public response to the MNA’s protest call has visibly boosted their confidence and brought a new stridency to their supporters.

It is quite apparent that the Islamists have successfully manipulated the popular revulsion against the American attack and increased their credential as the country’s main opposition force. They may not be in a position, yet, to force the ouster of President Musharraf, but they have certainly forced the government into a tight corner and now seem to be dictating their own political agenda. President Musharraf is tiptoeing a tight rope as mounting anti-American sentiments, coupled with the fall-out of a prolonged and bloody war in Iraq, threatens to destabilise his pro-Washington regime. While trying to maintain its cooperation with the United States in the war against terrorism, his administration is scrambling to desperately identify itself with the feelings in the streets and prevent public anger from boiling over into an anti-government uprising. Massive anti-war protests and across the board anti-American sentiments have forced the government to carry out a delicate balancing act by distancing itself from the US operation, while at the same time not alienating the US or allowing the Islamist alliance to stoke anti-American fires to an explosive point.

Although short of an out-right condemnation of Washington, the government has deplored the attack on Iraq indicating a tangible change in its earlier position of holding the Saddam regime responsible for the Iraq crisis. Just a few weeks ago, Prime Minister Jamali had declared that his government could not support a country which had never come to Pakistan’s help at crucial moments. But last week the ruling coalition joined the opposition in the Senate to condemn the aggression against Iraq.

Earlier, Islamabad, which is one of the 10 non-permanent members of the 15-nation UN Security Council, told Washington that it was not possible for it to vote on any resolution backing the use of military force against Iraq. President Musharraf informed President Bush of his government’s decision to abstain from voting in the UN Security Council during a crucial period when Washington desperately needed Islamabad’s support to swing a majority vote in its favour. Over several telephonic conversations with President Bush, the Pakistani leader explained that it was virtually impossible for his government to go against the overwhelming public sentiments against the war.

Pakistani officials maintain that Islamabad could not support the United States for two reasons: firstly, they were not convinced about the rationale for going to war when diplomacy still had a chance, and also because of fears that supporting the war would provide further ammunition for the Islamists, who were already on the warpath, to stir up unrest against the government.

Islamabad’s decision came as a serious blow to US efforts to mobilise support from alternate members after three permanent members, France, Russia and China, threatened to veto any move to rush to war. However, on Washington’s request Pakistan agreed not to make its decision public. “The US has asked us not to go overboard on this issue,” said an official. It was, perhaps, the main reason that Pakistan kept its position ambiguous until the end.

Unwilling to give up on a valuable ally at a crucial time, Washington continued lobbying hard for Pakistan’s UN vote. Senior officials said they faced intense pressure from the US to reverse their decision. “The Americans have offered us all kinds of incentives,” said one official. Some analysts believe the US held out the juicy carrot of increased economic assistance and debt write-offs in addition to those that Islamabad had already received since throwing its weight behind the US-led war on terror. “The position of the government and the position of the people appears be coming closer,” said Tanveer Ahmed Khan, political analyst and former foreign secretary. “Pakistan began by saying it is opposed to the war in Iraq and now it says, at the highest level, that hostilities should be stopped. There is a visible bridge between public opinion and government policies.”

Pakistan’s shift in their stance on Iraq may have helped the government to some extent in defusing public anger, but President Musharraf’s long-term political problems still simmer on the back burner. Most political analysts agree that Islamabad’s support for Washington must be balanced against two powerful forces at home: the religious conservative forces that have gained tremendous political support and the military that does not seem to be happy with the war in Iraq.

Islamic leaders, meanwhile have rejected the government’s gesture insisting that it should actively support Iraq and end all military cooperation with Washington in the hunt for Al-Qaeda fugitives. Riding on the wave of popular anti-war sentiments and emboldened by their newly found public support, Islamic groups have intensified their attack on the establishment, particularly targetting President Musharraf and calling him an “American stooge.” The MMA leaders have tried to use anti-American sentiments to vent their anger against the government’s pro-west policies and to gain maximum political mileage from a potentially volatile situation. “People will force General Musharraf to step down if he continues to support America which is the biggest enemy of Islam,” warned MMA leaders who govern the strategically important North West Frontier Province and share power in western Balochistan which borders Afghanistan. 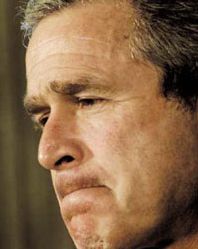 The alliance, which has emerged as the most powerful and vocal opposition group in Parliament and politically controls the strategically important North West Frontier and Balochistan provinces, has grabbed the opportunity to expand its support base in Punjab and Sindh. Encouraged by the massive show of street power, the MMA has visibly toughened its position on the Legal Framework Order. It has rejected any compromise on its demand that General Musharraf should take off his uniform and appoint a new “full time” Chief of Army Staff. “We cannot accept a president in uniform,” said Khurshid Ahmed, deputy chief of the Jamaat-i-Islami. The MMA’s position has been strengthened further in the wake of support by the PPPP and the PML(N) on the LFO issue.

The stand-off on the LFO has paralysed the newly elected Parliament creating a serious political crisis. According to the Constitution the National Assembly starts functioning as a legislative body only after the joint session of Parliament, which is addressed by the President. However, the constitutional deadlock has prevented General Musharraf from inaugurating Parliament even though the new National Assembly was elected almost five months ago. And with the MMA refusing to move back from its hard-line position, there seems to be no chance for a breakthrough in the near future.

In a situation, where only the government and the military are seen to be allies of the United States, its brazen use of military might against a Muslim country is bound to fuel an anti-establishment backlash. The MMA leaders believe that by targeting Musharraf they can break his support within the military. Most military observers, however, rule out any possibility of a division within the top military brass. Though Musharraf currently appears to have the full backing of his generals, that support could erode if the present political deadlock with the Islamic forces is exacerbated. 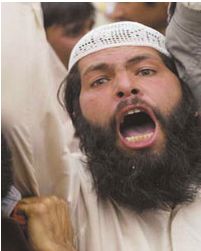 There has been a visible rise in the activities of the outlawed Islamic extremist groups which are now back in the field exploiting anti-American sentiments. Those militant leaders, who were recently freed from house arrest, have reportedly returned to the mosques to rally the Muslims against the United States and recruit volunteers for a new “holy war.” According to some reports, hundreds of Pakistani volunteers have enrolled to fight in Iraq after an Islamic cleric issued a ‘fatwa’ that it was obligatory for all Muslims to join “the jihad” against the invasion of a Muslim country by American forces.

Rising anti-American sentiments, coupled with a surge in support for conservative Islamic groups, have also had a significant fall-out in neighbouring Afghanistan where the US-led coalition forces are locked in battle with the remnants of Al-Qaeda and Taliban forces. There has been an alarming rise in the attacks by Afghan rebel forces, which are now united against the coalition. The recent ambush in southern Afghanistan which left two American soldiers dead and another critically wounded, and the increasing number of rocket attacks targeting coalition bases is seen as testimony to the support for the Afghan resistance from the pro-Taliban administration in NWFP and Balochistan. In the tribal region bordering Afghanistan, there is also growing resistance against the hunt for Al-Qaeda fugitives by Pakistani forces and the FBI. For the first time since the ouster of Taliban regime by the US-led coalition forces, some key former Taliban leaders have resurfaced warning that the attacks on the American forces would be intensified.

Political analysts feel that President Musharraf’s choices are severely limited. “So far he has managed the balancing act quite well, but the situation may become much more complex and difficult for the military leader if the war in Iraq is prolonged,” said an analyst.

Tightly wedged between the mullahs and a hard place, it remains to be seen whether President Musharraf will emerge unscathed.