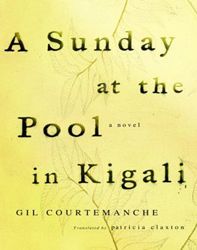 A Sunday by the Pool at Kigali is the first novel I have read in which the protagonists are AIDS, ethnic conflict and international do-gooders, mostly of the western variety. This novel is a testimony to the ills which beset Africa, and the role of the west in wreaking the havoc.

The setting is the horrendous massacre of one million people, which took place in Rwanda in 1994, and the narrator is QuÃ©becois journalist Bernard Valcourt, a Radio Canada producer in his forties, who accepts the job of setting up a TV station in Rwanda for a Canadian international development agency. As is the case with most westerners, he finds himself whiling away his time with other expatriates and self-important people around the pool at a luxury hotel in the capital, Kigali. The scene is much like in any third-world ‘hot spot’. The aid agencies are there, along with the UN, which means there are umpteen dollars floating around. Every Sunday, enterprising prostitutes, ministers, diplomats, wealthy Rwandans engaged in various trades, government workers, aid workers and, of course, journalists gather to gossip, and build contacts. This is a parasitic little world of power, adrenaline and sex: ”All around the pool and hotel in lascivious disorder lies the part of the city that matters, that makes the decisions, that steals, kills and lives very nicely, thank you.” Even the wildlife around seem to obey the rules of this game: ”When the ravens have settled, the buzzards appear and take possession of the topmost branches. Woe betide the lowly jackdaw that fails to respect the hierarchy. Birds behave like humans here.” These birds seem to represent the hierarchy that echoes the ethnic obsession of the Rwandans.

A Sunday by the Pool at Kigali bears witness to the three protagonists in a powerful, compelling manner. The author, Gil Courtemanche, a journalist by profession, writes in the preface, “The novel is fiction. But it is also a chronicle and eye-witness report. The characters all existed in reality, and in almost every case I have used real names.” He devotes the book to ‘…friends swept away in the maelstrom…to a few unsung heroes still living…Finally to Gentille, who served me eggs and beer and could be dead or alive, if only I knew….I have tried to speak for you/I hope I have not failed you.’ Courtmanche sees the conflict, which pitches the Hutus against the Tutsis, not as an ethnic one but one which has been catalysed by the west and the forces of capital.

The root cause of the conflict in Rwanda dates back to the colonial days, when the Belgian lords endowed power to the minority Tutsis, who were considered superior to the majority Hutus. Hundreds of years ago, however, before the Belgians, these people realised that the Great Lakes marked a fault-line between the Bantu tribes, and those they took to be descendants of Egyptians or Ethiopians. They lived in a misty land with a perfect climate and many hills, and they built kingdoms there. By the time Belgian colonisers came, the Hutus — seen to be descendants of savage Bantu warriors — had been subjugated to the status of hoers and tillers. Their rulers were the Tutsis, nomadic cattle grazers who had arrived much later. The Belgians decided that the Hutus were dumb and had flat noses. They gave identity cards and jobs to Tutsis, whom they saw as tall, light-skinned and bright.

Intertwined in the novel is the scourge of AIDS already causing its own quiet slaughter. As one victim says, “I still don’t understand how the sickness works, but we’ll say it is like a country that catches all the defects of its sickest people, and each of these defects turns into a sickness that attacks a different part of the body or the country.” But there is also the value the victims put on life “…that you can live only if you know you are going to die…You think we don’t value life as much as you. So tell me, Valcourt, poor and deprived as we are, why do we take in our cousins’ orphans, and why do our old people die with all their children around them?”

By the time Valcourt arrives, after several genocides over generations, the Hutus have the upper hand in government, but AIDS decides who will live or die. His friends , MÃ©thode, Cyprien and so many others believe they may as well die, or kill, through sex as from the blows of a machete. No weapons of mass destruction here! ”So here I am, a Hutu-Tutsi and victim of AIDS,” says a dying MÃ©thode, ”possessor of all the sicknesses that are going to destroy us.” MÃ©thode wanted to die clean, drunk, stuffed with food and in front of the television, he was no longer afraid because he would rather die of AIDS than be hacked up by a machete or shredded by a grenade.

There is a love story in this tragic tale: Valcourt falls in love with Gentille, a Hutu with the appearance of a Tutsi. His sexual obsession for her underlines the curious blend of lust and violence that characterised the genocide, brought together in Cyprien, Valcourt’s HIV-positive friend, who is savagely executed while being forced to make love to his already-raped wife. Gentille works as a waitress at the hotel in Kigali. She has a degree in social service studies and is beautiful. She has a secret in that for several generations her Hutu family, tall and pale-skinned for some unaccountable reason, has been masquerading as Tutsis, taking advantage of the superior position the latter tribe used to hold. As circumstances change, she is victimised for her features, and ironically for being the Tutsi she actually is not. As the Hutu violence against the Tutsi minority begins, Gentille makes her first approach to Valcourt, begging him for help. A Hutu by birth, she has an identity card to prove it, but because of the large numbers of forged identity papers, government officials will not believe that she is who she says she is, and even Valcourt is somewhat disbelieving. When at last they recognise their love, the genocide has started, and many of their friends have already been hacked to death. His treatment of her at the end of the book is devastating.

Like Valcourt, Courtmache recognises that “People who butcher human beings by spearing and slashing with bayonets are all upright, respectable folk. And when circumstances don’t lead them to war they close their eyes to injustice — no, they organise injustice. And when they don’t organise it, they tolerate it, encourage it, abet and finance it.” And this includes the UN ‘peacekeepers’ and the Canadian consul, who, when Valcourt presents her with some facts of the murder and genocide, responds with, “There are some things intellectuals like you won’t ever understand. Minor crises over individuals must never destabilize relations between states. You’re too sentimental to live in this country.”