Any discussion of Afghanistan often evokes contrasting images. Travels in the rugged country reveals an ancient and diverse land, the understanding of which will remain elusive for many, despite the media focus the country has attracted over the past three years.

As our small UN plane started its descent to the Kabul airport, things on the ground started to acquire a tangible shape. Signs of life began to appear as vehicular traffic became visible on the roads and the glass panes of grey concrete buildings towering above clusters of mud houses reflected the bright sunlight of that wintry day in February 2002, one month after the collapse of the Taliban.

The building of Kabul’s international airport, called Khwaja Rawash, had no windowpanes, and the cold wind from the snow-capped peaks of the Koh-e Baba Mountains made a whistling sound as it passed through its corridors. Inside the arrival lounge strutted the newly victorious soldiers of the Northern Alliance, visibly brimming with confidence. After filling out a short arrival form, all passengers on our plane were allowed into the ‘new Afghanistan.’ Interestingly, none of us had visas — none were being issued at the time.

What struck me instantly were the people: writ large on the face of each Afghan was a story of misery and suffering. Although this city of one-and-a-half million inhabitants had suffered one of the most devastating conflicts of modern times and most of western Kabul lay in ruins as only pock-marked ruins remained of block after block of the once modern suburbs, during the daylight hours Kabul had the semblance of a normal city — life went on just like anywhere else, in offices, restaurants, bazaars and homes. But a night-time curfew, from 9 pm onwards, turned it into a ghost town. That winter the Afghan capital smelt of diesel as the fuel provided the only protection against the bitter winter cold for those who could afford the costs.

A few days after we got there, the newly installed administration of President Hamid Karzai received its first major blow: its aviation minister, Abdul Rehman was stabbed to death, allegedly by a mob of angry prospective Hajj pilgrims agitating because of delays in their flights. That evening in a press conference Karzai named a few high-ranking Panjshiri officials for their alleged involvement in Rehman’s murder. However, no arrests were ever made and the assassination still remains unsolved. The next evening Kabul television showed pictures of a gloomy Karzai surrounded by his cabinet at Rehman’s funeral. It was a wet February day. A close-up of Karzai’s face showed a man aware of the heavy responsibility he now shouldered, but determined to overcome. “We are all waiting for our turn. Who is next is a guessing game,” one sombre minister from the Rome group loyal to the former King Zahir Shah that shared power with the Northern Alliance told me. 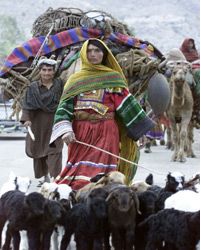 A month later we were in Kandahar, Afghanistan’s spiritual epicentre and home to Taliban Supreme Commander Mullah Omar. A dust storm greeted us on landing. Here too were destroyed buildings, widespread devastation — signs of an intense US bombing campaign that eventually forced the hardline Taliban to abandon their erstwhile administrative and military capital.

Although Kandahar was the first city to lift the night-time curfew, the situation was far from stable. The Taliban had been replaced by countless gunmen whose presence terrified the ordinary people as much as their predecessors. Nonetheless, in a turn of events that would have been unheard of just a few months earlier, numerous shops had sprung up, selling long banned music cassettes and movie CDs. A few video game shops had also started operating, but Kandahar’s local radio and television stations seemed to be forums solely aimed at projecting the image of local strongman and governor, Gul Agha Sherzai. A welcome observation was that before the school year had begun in most of Afghanistan, uniformed schoolchildren, most of them carrying UNICEF bags, had started going to school in the dusty city.

The southwestern region surrounding Kandahar was home to an acute humanitarian crisis. Thousands of displaced people, most of them nomads or kuchis and farmers who had fled their villages after losing their livelihoods due to a three-year regional drought or because of the fear of American bombs, were gathered in numerous camps in Spin Boldak close to the Pakistan-Afghanistan border crossing of Chaman. The squalor was heart-wrenching. To compound the problem, daily the already over-crowded camps were receiving fresh arrivals, most of these ethnic Pashtuns fleeing marauding anti-Taliban militias in northern Afghanistan bent on vengeance for past Taliban atrocities.

I interviewed an elderly nomad woman from Ghazni. When I positioned my camera to take her photograph, she said archly, “Where were you when I was young?” A remarkable sense of humour given the distressing circumstances. I will never forget her toothless smile.

The summer of 2002 was humming with political activity in Kabul as 1,500 Afghan men and women gathered in a white Bavarian beer tent to hold the historic Emergency Loya Jirga or grand council. The site had more security than I had ever witnessed anywhere. Inside the huge air-conditioned tent Central Asia mingled with South Asia as turbanned Pashtun tribesman from southeastern Afghanistan sat next to ethnic Uzbeks wearing colourful cloaks called ‘chopan.’ Most of the sessions I attended were chaotic, with each speaker trying to get a word in edgeways and communicate his/her sentiments to fellow countrymen with whom they had never before communicated. In fact, most of them had seen each other only through the barrel of a gun for the preceding two decades. 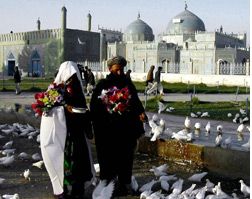 For most Afghans the event set the pattern for Afghan politics for the immediate future. Many warlords retained their fiefdoms and once again the newly elected Afghan President, Hamid Karzai had to lead a warlord cabinet. Hopes for re-establishing a Muhammadzai monarchy were dashed when the US vetoed the ascent to the throne of Zahir Shah, who was awarded a symbolic “father of the nation” status. In the course of the exercise, it became increasingly clear that the American quench for hunting “terrorists” surpassed their desire to help Afghanistan gain stability and get down to serious nation-building.

In August of that year I went to the western Afghan city of Herat. At least 3,000 years old, the city is one of the most historic places in the entire region. The historic Masjid-i-Jamia (Friday Mosque), the fort of Ikhtiar Baig, the four minarets of a madrassa and numerous mausoleums dotting the desert city are diminishing souvenirs of the Taimurid period of the 14th and 15th centuries.

This historic city was now home to a large number of displaced persons from across the country. Maslakh, literally meaning a slaughterhouse, was the largest among the five displacement camps and was housing between 65,000 to 200,000 people, the estimate depending on which aid agency you talked to. The most common lament heard in the camp was of hunger: everybody complained about the meagre amount of bread they were receiving. One elderly herdsman told me about how he had sold his last two goats to pay for the journey to Maslakh, only to find more misery.

The most remarkable road journey I ever made in Afghanistan was from Kabul to the northern city of Mazar-e Sharif across the Salang Pass in the spring of 2003. This 350 km long road was one of the major infrastructure projects the Soviets undertook in the 1960s. Just the tunnels and galleries and the road across the Salang Pass cost 638 million USD. The longest tunnel is three kilometres long, and at a height of 11,100 feet above sea level is one of the world’s highest. Surprisingly, although the late Afghan resistance leader, Ahmed Shah Massoud blew up its northern entrance in 1996 to halt the advancing Taliban, and despite years of profound devastation, the tunnel remains largely intact.

Mazar-e Sharif’s skyline is defined by the blue tiled tomb of Hazrat Ali’s shrine, which virtually lies in the centre of the city. It is home to thousands of white pigeons fed by visiting pilgrims. Every spring the place hosts a special festival when a flag is raised to mark the beginning of the new Afghan year. Ever since the fall of the Taliban, the city has witnessed bitter rivalry between ethnic Uzbek warlord, General Rashid Dostum, and Ustad Muhammad Atta. The city was virtually divided into rival zones of influence as warring groups controlled different departments and manned two fully armed military corps. Several visits to the Dostum-controlled “foreign office directorate” for an interview did not bear any fruit, despite repeated promises by his spokesman, Faizullah Zaki. On the other hand, Atta’s political deputy, Zalmay Yunusi, politely answered all the questions I shot at him, including the hard ones about mass graves and human rights abuses.

In the winter of 2003, I finally ventured into Gardez, the capital of the southeastern Paktia province. In the past all such attempts had to be aborted because of a deteriorating security situation. To my surprise, Gardez was a calm town where life was made difficult more by sub zero temperatures than insecurity. With a new police chief and a forthright governor who displayed stickers in his office denouncing bribery, the town was one of the first success stories where warlord rule had been firmly put to an end.

Nobody can truly claim to have seen Afghanistan unless they have visited the magnificent Bamiyan in the central Afghan highlands. Now inhabited by mostly poor ethnic Hazara farmers, the town straddled the ancient route from Balkh to Taxila. The two spectacular sandstone Buddha statues that defined Bamiyan for nearly 16 centuries were destroyed by the Taliban in 2001, but the empty nichÃ©s that housed them still attract attention.

Afghanistan has changed significantly over the past three years. During visits to Kandahar and Herat last summer, I discovered that finally some reconstruction was being carried out. With carpeted roads, round-the-clock electricity, booming regional trade, functioning health and education facilities, Herat is the most liveable town in Afghanistan today. Although during my last visit the ancient city was ruled by Ismail Khan who had banned all female singers on radio and television, the international media had been reporting on the return of freedom to the region after Khan was replaced by a Karzai-appointed governor.

Afghan resilience is legendary and I discovered it everywhere. Dr Naz Dana Paktiawala who ran the lone maternity clinic in Gardez survived through two decades of turmoil, revolutions and invasions. “We are a strange people, if pushed to violence we can make the world wail. However, if our energies are harnessed into something positive we can work wonders,” she said. I hope the world listens to her message.